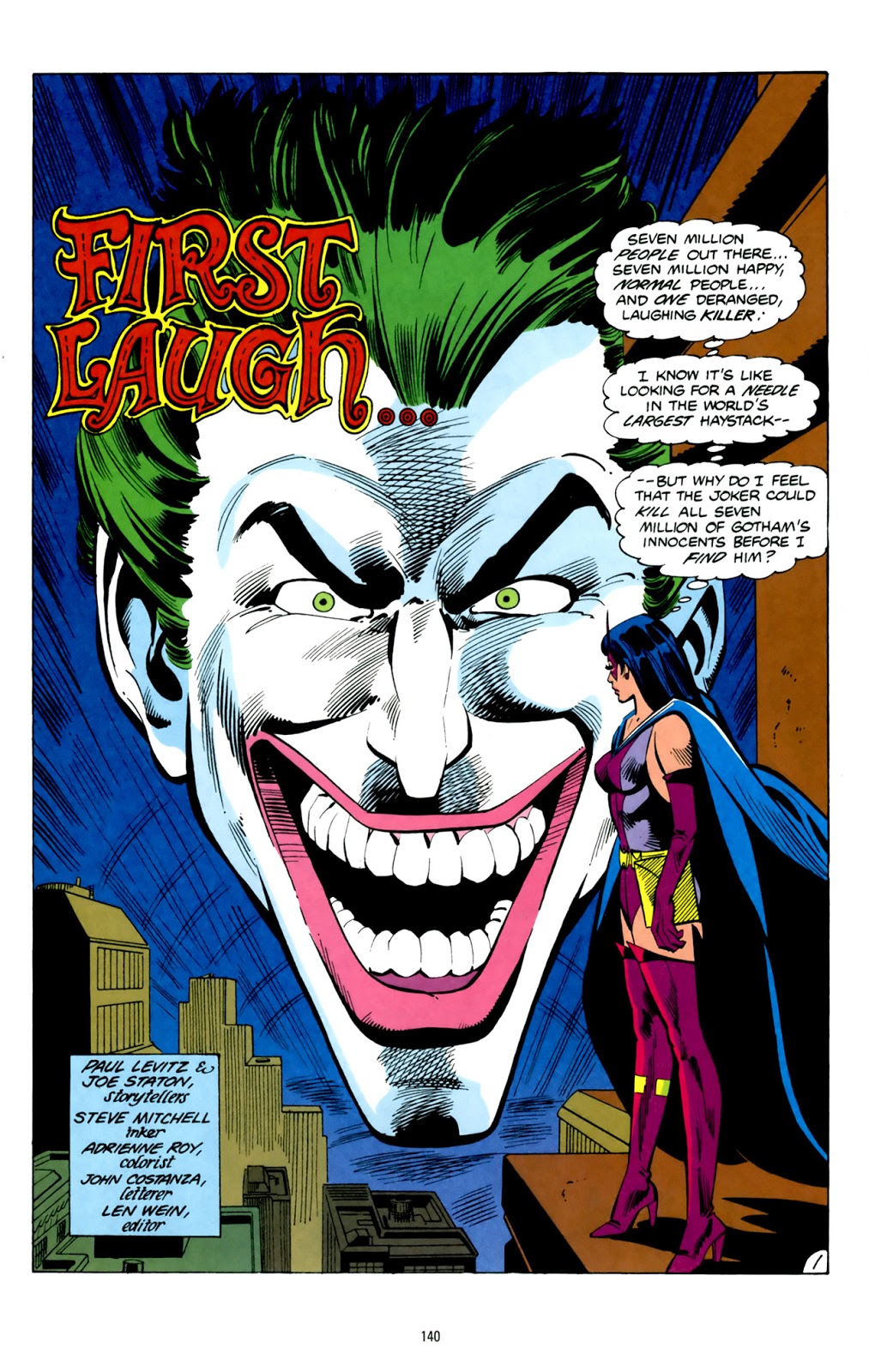 Summary: The chapter begins with Huntress meeting up with her boyfriend following a prison riot she helped foil, only to find that he's been exposed to Joker venom. Huntress takes him to Gotham General Hospital for treatment and goes on her hunt for the Joker.

Helena spends her night researching everything she can on the Joker hoping to find any leads to his whereabouts, but quickly learns that there is no logic to the Joker's pattern of crime. As such, she is unable to find any possible motivations to his recent attack and finds herself at a dead end. She then decides to pay a visit to Commissioner O'Hara who is an old friend of the Waynes and has known Helena since she was an infant. Before he has the chance to tell her the information she needs, he is shot with one of the Joker's venom darts which disfigures Commissioner O'Hara's face into the Joker's trademarked hideous grin. Helena then deduces that the Joker is nearby and doesn't take her long to figure out which building he fired the dart from. She manages to catch up to the Joker, but the Joker nearly hits Helena with one of his darts which causes her to fall off the building she's on. The Joker takes note of the fact that Helena is inexperienced at the being a costumed hero gig, and ends with telling Helena that she 'almost had the privilege of being killed by the Jokers.' Feeling humiliated, Helena decides not to rely on her crossbow to fight the Joker seeing what he does with darts and breaks it.

Huntress decides to try and traceback his supply of "dimethylsilicate" (the active ingredient in Joker venom) by hunting down a well known drug dealer (a man named Charlie) for information. Not only is the dealer in question back in the business, but he along many others are either completely unaware of chemical compound making a comeback or are no longer selling it. This puts Huntress back on square one and decides to just go to work instead. At her work place she gets an idea from interacting with her new associates and decides to return to Wayne Manor and utilise her father's resources for tracking him down. At another bar in Gotham, the Joker is out for a drink looking a little depressed to know that with his greatest adversary deceased, his life lacks purpose. That is until news of Batman's apparent return catches his attention and feels his motivation for crime coming back to him again.

Back at Wayne Manor, news of "Batman's Return" reaches Helena, who sees it as a perfect opportunity for drawing out the Joker since surely he would invest more of his time looking for her "dad" than killing any of Gotham's citizens. Just as she is taking comfort in that thought, the alarm in the Batcave sounds, which alerts her that something has gone terribly wrong already. Doing as her father used to do whenever the Bat signal went up, Helena answers the call.

Meanwhile, Helena's law firm--Cranston, Grayson, and Wayne--is facing a lawsuit for libel, which has its senior partner, Arthur Cranston, feeling uneasy. He lets his associates know that if they want to back out while they still can, they'll have the option to do so, but to think about it first before reaching a final decision. A shadowing man (presumably Dick Grayson) reassures Cranston that both he and Helena will stay be his side regardless.

In another corner of Gotham, the Joker himself has turned on the Bat signal and happily awaits the arrival of his long missed foe. However, the Huntress is there waiting to take him down. The Joker not having any interest in the Huntress decides to leave instead, but Huntress isn't willing to let him off the hook that easily. A small fight ensues between the two until "Batman" show's up to watch Huntress take him down. While the Joker is enjoying his brief moment of joy, Huntress uses this opportunity to knock him unconscious. The "Batman" disappears after this point, which leaves Huntress thinking as she hauls Joker to Jail. 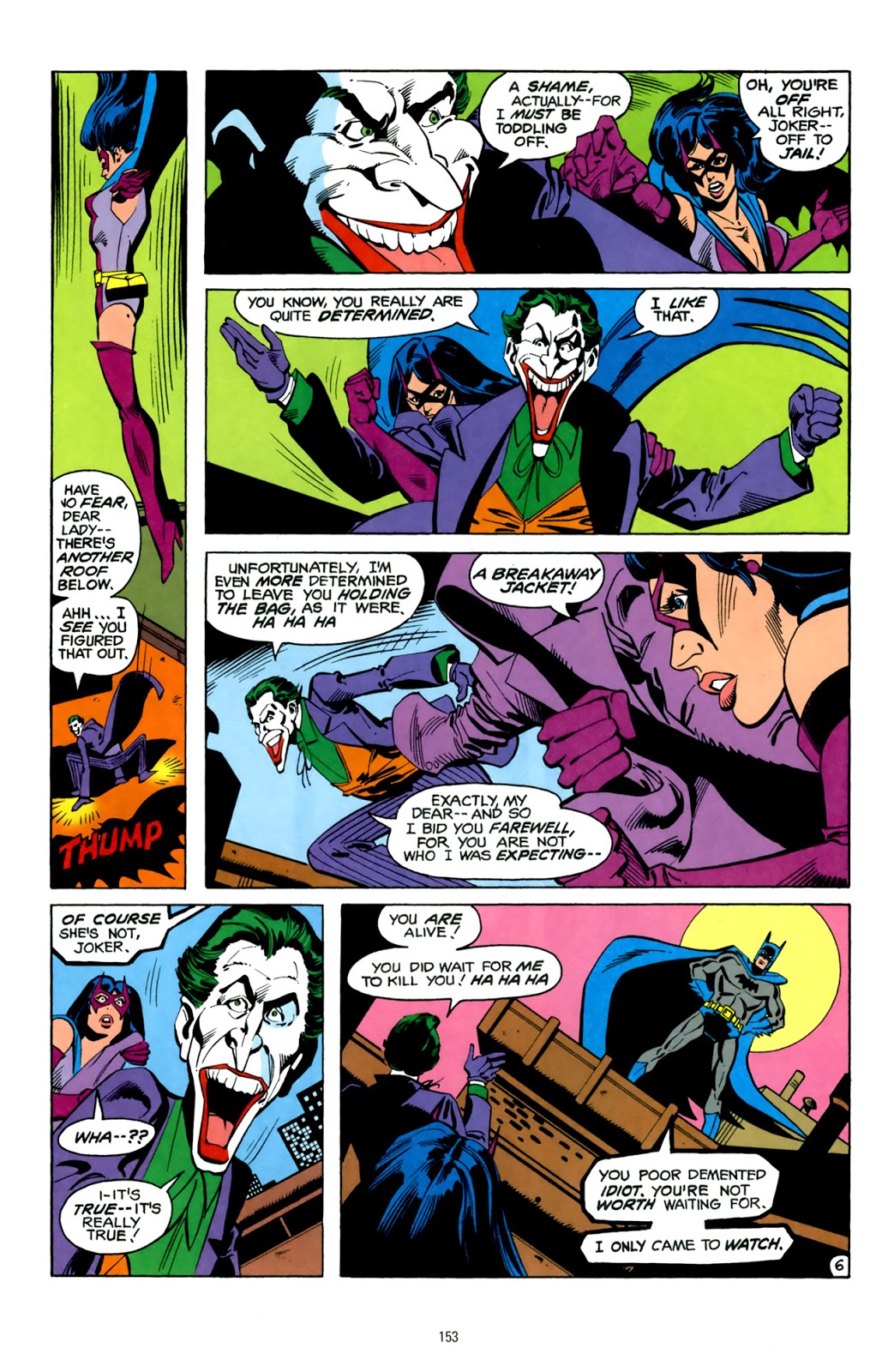 Review: It just occurred to me that this is the first pre-Crisis Huntress story I've reviewed that was written by Paul Levitz. When you compare the way he's writing the Huntress now as opposed to how he wrote this character in the 1970s and 1980s, you notice a huge difference in characterisation. The only thing of the pre-Crisis Helena that survived with the current incarnation is that she's still very much devoted to her work as the Huntress, but her personality differs significantly from that of her pre-Crisis incarnation. It's enough to say that when you take into account that the newer version of Helena Wayne is a lot less emotionally mature than her pre-Crisis counterpart, and is perfectly fine with killing without a shred of remorse, it really does make it hard to believe that you're still reading about the same character in these pages. In fact, it's always a very different experience to read about this character in the New 52 and then revisit these pages and get a totally different feel for her character.

One of the things I definitely miss about the pre-Crisis Wayne that is very present in this story is how very work-oriented she was. I do miss the fact that she was a lawyer by day and a costumed heroine by night, which was something that was totally new for its time. It's not even something we have in the DC Universe of today, which is saying a lot in the way of progress. I also miss the fact that the pre-Crisis Wayne did actually read like someone who was raised by Batman and Catwoman in that she had a very strong obligation to preserve the law in ways that her younger New 52 incarnation does not. I do like the fact that when she sets her mind to something, she sets out to resolve it (or "catch her prey" as she prefers to call it) in the most legal way possible, at least for a person who functions as a vigilante. The fact that she was a lawyer who also functioned as a vigilante created an interesting dynamic for character as someone who operated both within and outside the law, which again was unheard of for a female hero in particular. So the fact that she lost all of this development in the New 52 (and even moreso in being stranded on the main DCU Earth) again makes the newer version feel like a huge step backwards from all the progress she obtained in the 1970s and 1980s. She actually lost a lot of the power that she had in these pages, which is really tragic to think about for someone who is meant to be an heir to Batman's legacy.

I would say the only flaw that this story has even for its time is that the Joker comes off really weak as an antagonist. While Levitz does manage to capture the essence of his character and actually succeed in depicting the Joker's style of humour, he also gives him very weak lines that lack any original thought and has a particularly short-lived motivation. As such, it's really hard to take him seriously as a threat because he feels very watered down for a character who was originally scary to think about in the 1940s comics.

All in all, once you get past the weak characterisation of the Joker, Always Keep 'Em Laughing is actually a great short story featuring a strong female lead who is driven by a strong desire to preserve law and order in a post-Batman Gotham.