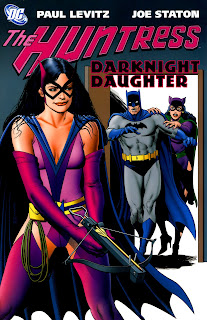 Helena Wayne Huntress is a fan-run blog dedicated to one of DC's most compelling heroines of both the Justice Society and Batman properties, Helena Wayne.

To many DC Comics fans, Helena Wayne is more than just the alter-ego of the Huntress and the Earth-2 daughter of DC's second iconic couple, Batman and Catwoman. She is also one of the valued members of the Justice Society of America (the original superhero team), the best friend of Power Girl (Superman's cousin), and her existence even facilitated the creation of the Earth-0 Huntress, Helena Bertinelli.

Depending on the continuity, Helena Wayne is either the daughter of the Golden Age Batman and Catwoman who continues their legacy as the Huntress and is also an active member of the Justice Society of America, or she is the alternate universe daughter of Batman and Catwoman who started out as their Robin and later continued their legacy as the Huntress working alongside a new generation of heroes known as "Wonders." In both cases, she is still the daughter of Bruce Wayne and Selina Kyle who doesn't originate on the same Earth as the Justice League and their versions of the Trinity.

This blog seeks to document all of the character's appearances in comics and in other media since her DC debut in 1977. This blog also seeks document her native world of Earth-2, the teams that she has worked with (such as the Justice Society, Justice League, and Infinity Inc), and the relationships that are unique to her such as her friendship with Power Girl, and her immediate family members like Selina Kyle, Bruce Wayne, and Dick Grayson.

This blog also seeks to be a resource to other fans who are interested in the character by providing a list of all of her comic appearances, links to where these comics can be legally purchased, and even provide reviews and previews of the comics she appears in to help fans find comics that are more to their tastes.