DC ALL ACCESS: Helena Bertinelli is connected to Helena Wayne?

Two days prior to the release of Huntress #1, DC made an official blog post disclosing which of the New 52 books Huntress will be tied to and revealed she will be playing a significant role in Birds of Prey, Mr. Terrific (where Karen Starr is a supporting character), and next year's Justice Society set to take place on Earth-2.

Then at the end of Huntress #1, DC All Access hinted more on not just the future of the Huntress, but also on the future of Karen Starr and her relationship to Mr. Terrific:


"Ok, we told you last month that September was only the beginning! And here we are now entering the second month of the New 52!

And "two" becomes a very important number in an unexpected way as writer James Robinson revealed to a stunned crowd at Fan Expo Canada, he will be writing a JUSTICE SOCIETY series drawn by Nicola Scott that takes place on...wait for it...Earth-2!

What does that mean? Well, it means a world parallel to the current DC Earth. But what's parallel and who's on it, only time will tell or maybe there will be hints of things to come in the HUNTRESS mini that's on sale now! It's written by the character's creator Paul Levitz and drawn by the amazing Marcus To (don't take my word for it, look at the art on this page). As originally conceived, Helena was the daughter of two very cool and special people. Two people we knew, but they weren't from here. The Batman and Catwoman of Earth-2. Not bad parentage, and it made Huntress a very aggressive hero with a unique point of view.

Now as we get further into the all-new world of the New 52, you'll have to check out the 6-issue mini to find out where she really comes from. In that regard, I also say pick up MR. TERRIFIC by Eric Wallace and Gianluca Gugliotta. In that book, Michael Holt's relationship with Karen Starr could have some interesting developments.
As been noted, we're just getting revved up!"


I have to admit I'm rather intrigued by both of these "big" reveals. Either this means that Helena Bertinelli has made some connection to her Earth-2 counterpart in the form of Helena Wayne and there will be a first multiverse cross-over, or the big reveal at the conclusion of the Huntress mini is that 'Helena Bertinelli' is really Helena Wayne working undercover for something and is using an assumed alias. Either way, it's gotten me very excited for following this mini through to the end!

The premise DC has set up of the Huntress character is a rather interesting one and it'll be interesting to see how her story ties into both the Earth-2 JSA as well as the Earth-0 Birds of Prey and Mr. Terrific. But from what is known so far, it looks like all the arrows are pointing to the return of the Helena Wayne Huntress after 20+ years of inactivity.

How this will fair with new fans and old fans alike only time will tell, but at least fans of the original Huntress will have something to look forward to if DC does decide to bring her back to Earth-2.

How will Helena Bertinelli play a role in reviving Helena Wayne? How will she react to the knowledge that her Earth-2 counterpart is the daughter of Batman and Catwoman? Or is she really Helena Wayne in disguise? Oh the mysteries!
Posted by Diane Darcy at 10:13 No comments: 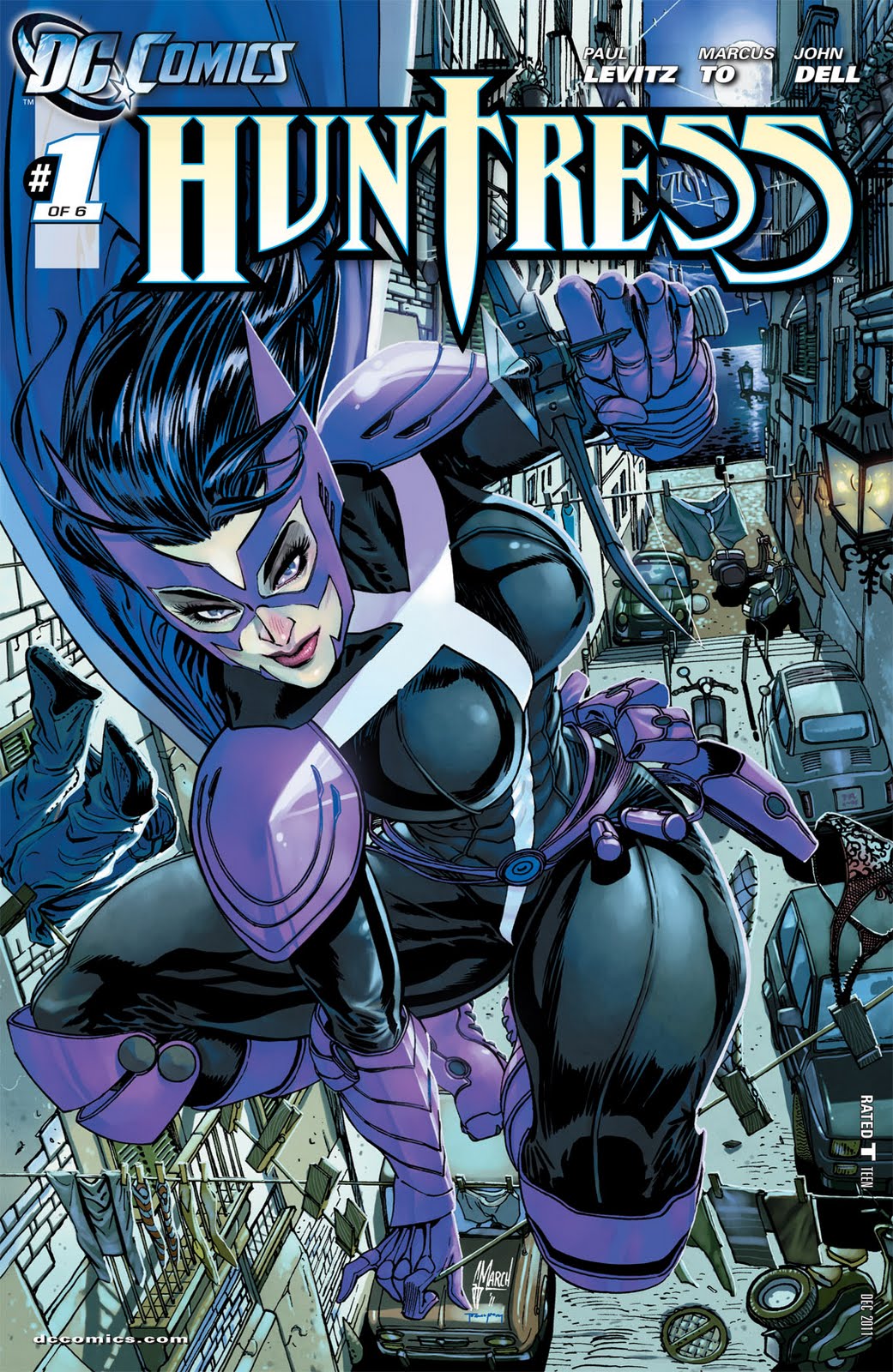 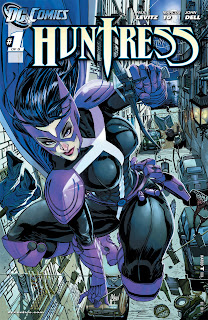 HUNTRESS #1
Written by PAUL LEVITZ
Art by MARCUS TO
Cover by GUILLEM MARCH
The Huntress hunted! What will the Huntress do that warrants such a death mark? And who puts it there? The jaw-dropping events will be revealed as the Huntress heads home to Italy and embarks on a mission that defines her life.
OCTOBER 05 | RATED T | $2.99 | PRINT | DIGITAL