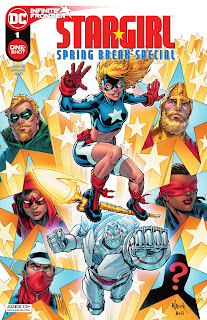 It turns out the original Crimson Avenger has been found, but that's not the only surprise that awaits the team. It also appears the Clock King may have gone way over his head and his latest plans may have brought him at the mercy of a Justice Society villain with a penchant for time travel: Per Degaton. What does Per Degaton want with the Clock King and how does that tie into his plans for the Justice Society, past and present? 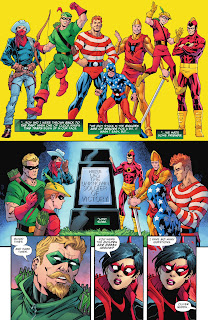 Review: DC Comics has been bold in their approach to the DC Multiverse since Dark Nights: Death Metal rebooted it into an Omniverse, effectively restoring every DC timeline that ever was, currently is, and can be. While details of the new DC timeline are still being fleshed out in the Infinite Frontier miniseries along with the Future State comics, today's Stargirl: Spring Break Special gives us a more definitive status quo on DC's Golden Age heroes, including legacy heroes.

If you haven't read Stargirl: Spring Break Special yet, turn away now, as there are major spoilers ahead!

Written by Geoff Johns with artwork from Todd Nauck and Bryan Hitch, one of the things the Stargirl special establishes for readers is what is currently canon in the Infinite Frontier timeline. One of the first things Johns and Nauck confirms is the identities of the Green Arrow and Speedy we saw teased as members of the Seven Soldiers of Victory in the 1940s. They do confirm they are the same Oliver Queen and Roy Harper who are currently active in the present timeline, but with a major retcon: they were now time displaced in the 1940s for a time as opposed to having debuted in the 1940s. They only made it back to the present after Nebula Man displaced the Seven Soldiers, just like in previous continuities.

Other characters and timelines that get confirmed include the original legacy heroes who were members of the Justice Society during the 1970s and 1980s. This marks the first official appearance of the original Helena Wayne Huntress as a Prime Earth character, with the implication that she is time displaced. Exactly where and when she is is teased as an upcoming Justice Society storyline, which will also potentially streamline DC's entire Golden Age history and legacy.

In terms of story, the Stargirl special serves as an easy entry point for both new and old readers. Johns and Nauck reintroduce Courtney Whitmore as Stargirl, Pat Dugan as her step-father and sidekick S.T.R.I.P.E., and the Seven Soldiers of Victory in a way that's easy for everyone to follow. Johns and Nauck provide just enough information about each character to get readers up to speed, but avoid excessive exposition. The majority of the writing is focused on developing the actual story, which also sets up two upcoming series: Stargirl and Justice Society. 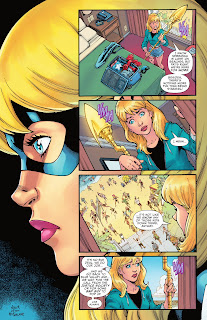 On the front of characterisation, Courtney's depiction is consistent with her past portrayals in the comics as well as the Stargirl TV show. Courtney is once again an outgoing teenage girl from California living in Nebraska, who also struggles to balance her school life with her superhero lifestyle. More insight into Courtney's complicated life are provided in a snippet written by actress Brec Bassinger, who portrays the character on the TV show. Pat Dugan's characterisation is also fairly consistent with his past portrayals in the comics and television show.

The one characterisation I felt was hit and miss was that of Emiko Queen. On the one hand, she is depicted as highly intelligent, self-motivated, and has excellent chemistry with Courtney. What I'm not sold on, however, is the idea of her being a less skilled archer than Oliver. To establish that Oliver is somehow the better archer after a few years of being stuck on an island than a half-Japanese girl who was raised to use a bow from a young age just doesn't feel right. Especially considering she was raised by Shado, who would absolutely make sure she doesn't miss her targets. (There's something more to be said about Japan's high standards for performance, but I'll save that conversation for a different post.)

As for how the story fits into the overall DC continuity, this is also a bit hit and miss for me, though admittedly more hit than miss. I do appreciate the attempt to integrate all of the characters associated with DC's Golden Age on Prime Earth, including characters that were originally unique to DC's Earth-2 continuity like Helena Wayne. I also think using Per Degaton and time travel as the reason some characters went missing and why certain aspects of history changed is pretty ingenius.

My only complaint on this front is Johns adding unnecessary retcons that could potentially further convolute the DC timeline. I especially had this issue with retconning Green Arrow and Speedy as getting pulled back in time to temporarily live in the 1940s as opposed to having them originally appear in that timeframe. It's especially unnecessary in a story that acknowledges the original time displacement of the Seven Soldiers of Victory by Nebula Man, causing them to reappear in the present in the first place. 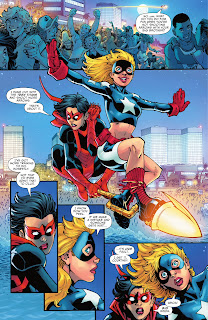 There's also the question of Power Girl, who -- as of this writing -- is probably still the Earth-2 survivor of Crisis on Infinite Earths. So it's going to be a Herculean task to figure out how to merge her pre-Crisis Earth-2 history with her Prime Earth history, especially on an Earth that already has Supergirl.

On the whole, Stargirl: Spring Break Special offers a mostly clean start to a Justice Society relaunch in the Infinite Frontier era. Courtney herself is off to a strong start as we can probably expect her new ongoing to launch sometime around the airing of the second season of her TV show. My only concern about the Justice Society's future is how much more Golden Age history will be retooled to accommodate Prime Earth canon, but that's about it.