The Best of the Huntress: DC Super-Stars #17 Review

Summary: The summer of 1955 saw the beginning of a new chapter in the lives of Bruce Wayne and Selina Kyle, known to most people behind the fourth wall as Batman and Catwoman. It was the year Bruce and Selina got their lives together after fighting and committing crime as Batman and Catwoman respectively for fifteen years. They both reached a point in their lives where they started reevaluating where their lives were going, they especially realised they weren't getting any younger, and so they started thinking about the other things they wanted to have in life. Bruce in particular began to acknowledge the positives of having relationships in his life and Selina reached a point in her life where crime no longer provided her with the thrills it once did. One thing Bruce and Selina had in common? They both realised they wanted a family more than anything. (See Brave and the Bold #197: The Autobiography of Bruce Wayne.)

The big event of 1955 was the wedding between Bruce Wayne and Selina Kyle, and amongst the invited guests were Clark Kent (Superman) and his wife Lois Lane, Richard 'Dick' Grayson, Alfred Beagle, and of course, Commissioner James Gordon and his family. (See Superman Family #211) By this point in each of the characters histories, Dick Grayson was now a grown man who (temporarily) abandoned the Robin costume to pursue a career, Selina Wayne had retired Catwoman for good, and Bruce Wayne also hung up the cowl and devoted his time to being a social activist. Two years later, the couple's only child, Helena Wayne, was born and so began a new chapter in their lives.

Life was good for the Wayne family for the next twenty years. Helena grew into a remarkably beautiful young woman with a great personality, she benefited from the best quality education her parents could afford, she excelled at sports, gymnastics, and martial arts, and even pursued a law degree at Harvard University. Despite knowing from a young age that her parents were Batman and Catwoman and was completely wowed by the stories they told her as a child, young Helena had no intention of taking over the family business and instead decided to live up to her father's legacy as an attorney in Gotham. Sadly for Helena Wayne, that was never meant to be. 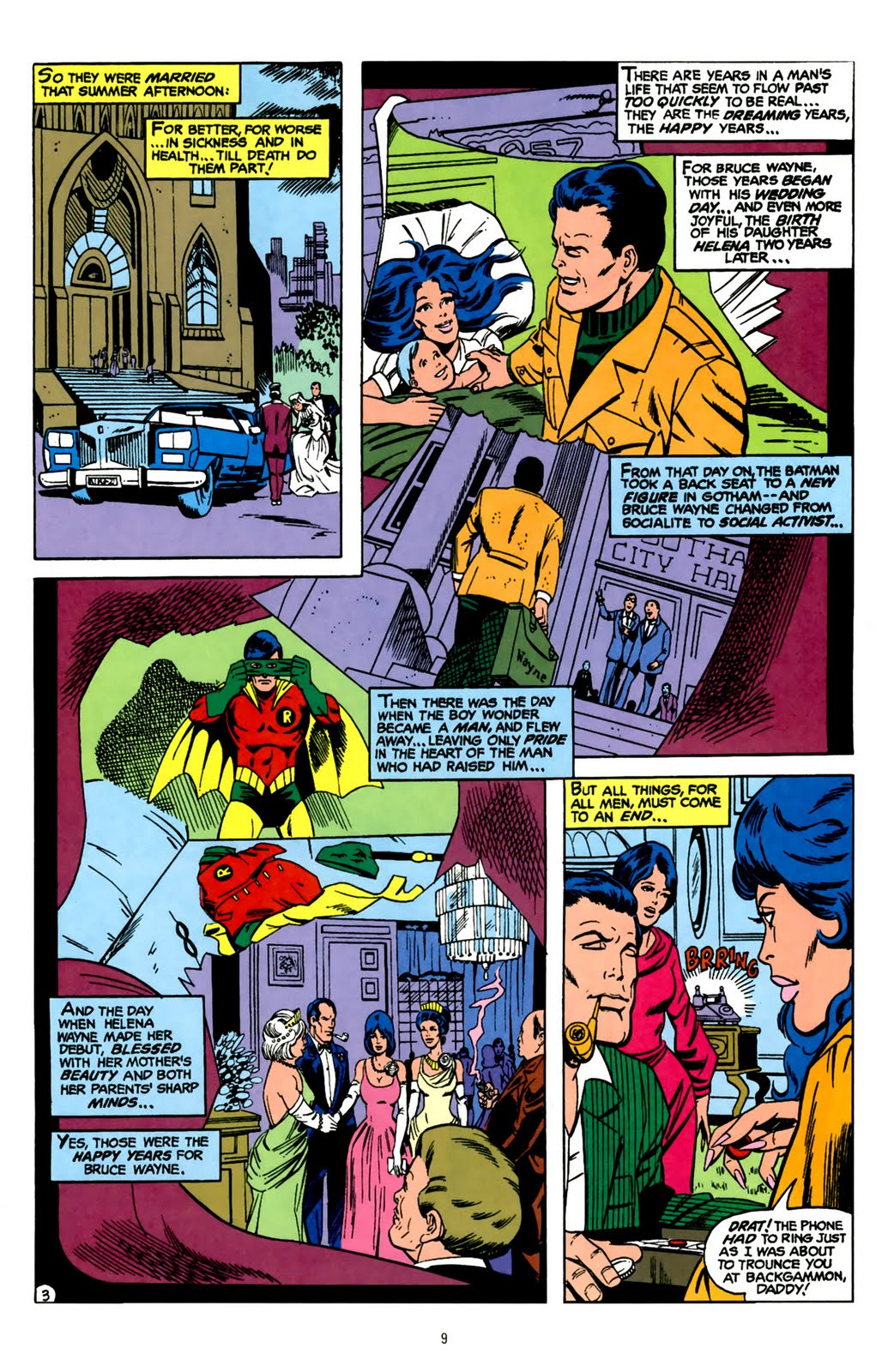 On a normal, regular day that the family was spending time together, Selina Wayne received a phone call. Not from any friend or family member, but from one of her former henchmen from her Catwoman days, Silky Cernak. It turned out Silky had recently gotten out of prison and decided to payback his former boss for the time he spent in the 'slammer' by blackmailing her into doing another gig. In exchange for keeping her family safe from harm, Selina agrees to do a final job as Catwoman.

That night, Selina and her former gang (all dressed up in their cat costumes) break into the Gotham Civic Centre to steal some rare gems on exhibit, which gets the attention of Commissioner Gordon who summons Batman. At Helena's suggestion, Bruce put on his Batman costume one more time and answered the call. Upon intervening, however, a stray bullet from Cernak's gun killed Selina which caused Bruce to not capture any of the members of Selina's former gang and instead stayed by his wife's side at the moment of death.

At Selina's funeral, Alfred and Bruce were clearly saddened by his wife's death, though no one mourned Selina's death quite as strongly as Bruce did since he felt responsible for it and ended up burning his Batman costume that night. Helena on the other hand was clearly angry. She revisited her mother's grave later that night, not as Helena Wayne, but as the Huntress and swore on her mother's grave that she would seek justice for her and that she would put the man who took her life behind bars. With that, Helena's first case as the Huntress began.

The Huntress searched endlessly for any leads on Cernak's whereabouts, and upon finding one, she prevented one of his customers from meeting with him at Gotham's docks and went herself there to confront him. During the confrontation, Cernak mistook Huntress for Batman, and before he had a chance to 'off the Bat,' Cernak revealed to her that he doctored a photo of Selina killing a police officer, which angered the Huntress enough to beat him unconscious. The next day, Cernak was seen hanging over the police station in a fishnet, which caused Bruce to think that Dick Grayson had taken it upon himself to capture his wife's killer. Helena corrected him by suggesting to him that *maybe* this wasn't the work of Richard, but of someone new...

Review: When you consider how Helena's origin was revised for the New 52 continuity, and more importantly how lazily it was executed in the Zero Issue of Worlds' Finest, I always finding myself taking comfort in her classic origin instead. All of the drama and emotional beats that were missing from the Zero Issue of World's Finest are refreshingly seen here.

Beginning with the fact that Bruce and Selina's marriage was actually explored with a bit more detail in this version of Helena's origin, there is literally nothing here not to like. Not only do we see a celebration of Bruce and Selina's love for each other during their wedding panels, but we especially get to see how their story progressed in just a few pages. More importantly, we are given better insight on Helena's life prior to becoming the Huntress. In just these few pages, we see how happy the Wayne family is for the first time in years, and we finally see a version of Bruce Wayne who is finally at peace with his past, and a Selina Wayne who is happy with the new chapter in her life, free of crime and violence. 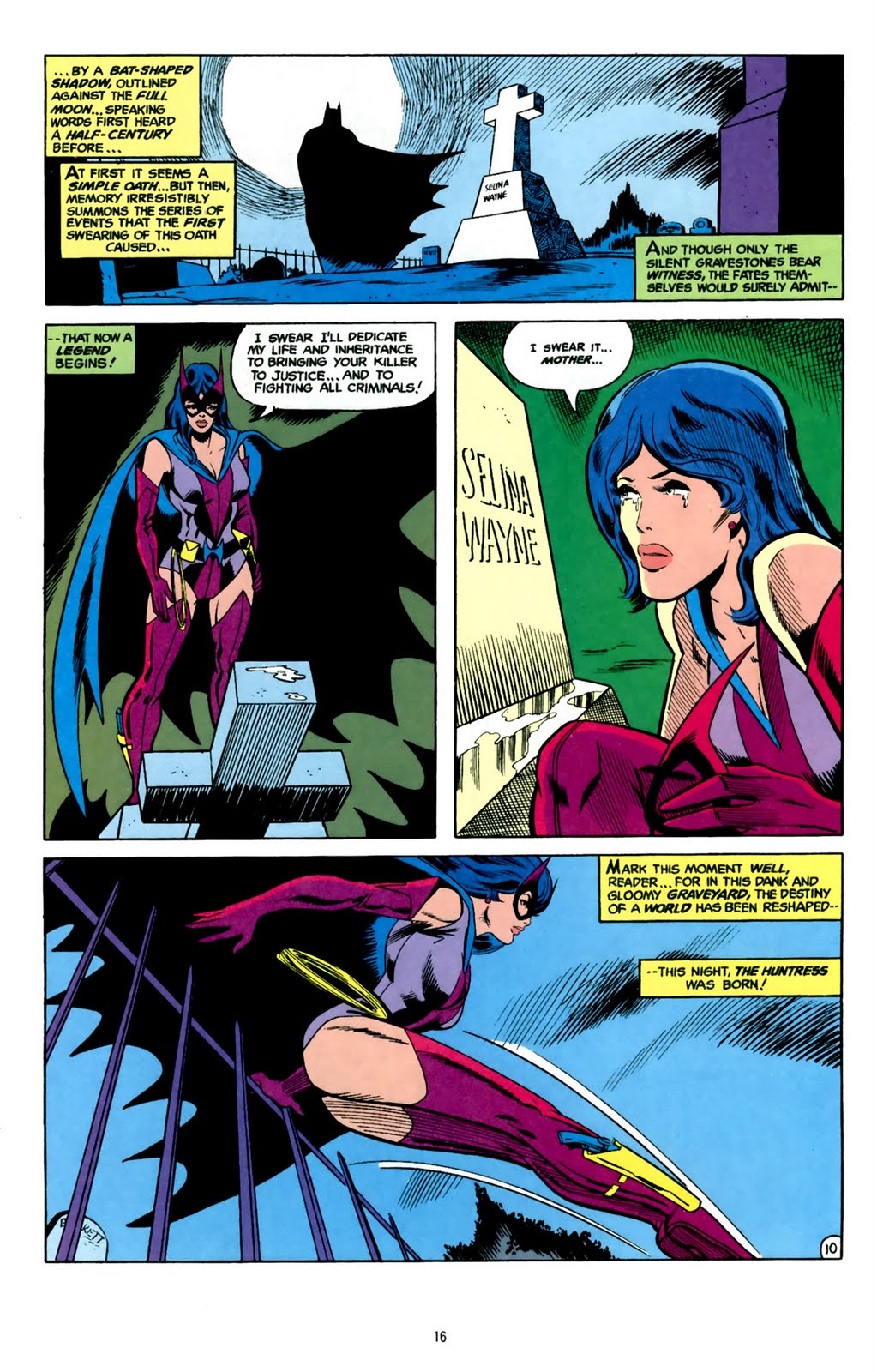 Within these pages, we also see how very fortunate Helena feels to have the parents that she has, maintaining an upmost respect for both of them. The fact she maintains the same level of respect for her mother that she has for her father is in itself a very significant detail because it tells us that she is not at all troubled by other mother's past, and recognises her for the good person that she is. Given that very important development, when Helena is seen crying at her mother's grave, swearing to seek justice for her as the Huntress, as a reader, I can actually sympathise with what she's going through. Not only is this a major change in her life, but she also lost one of the most important and influential people in her life. This was a big deal to her, and it showed in the way that she took out the man responsible for her mother's death: she let him have it!

Considering how mothers in narratives are often underdeveloped and treated as plot devices that only exist to further the stories of characters, it was actually refreshing to see Selina's story being given equal importance in Helena's narrative. I especially liked that there was emphasis on the close relationship that she had with her daughter Helena. Furthermore, I did like the fact that Selina actually had agency in the narrative leading to her death. In huge contrast with the way that her death was written in the New 52, Selina was actually depicted making a very difficult decision out of a strong desire to protect her family from harm. Neither she, nor Bruce, nor Helena foresaw what was coming, which actually put more weight on the impact of Selina's death, enough for Helena to be strongly affected by it.

All in all, this is by far one of the best Huntress origins in existence that it actually made me sad that Paul Levitz didn't put in the same heart and soul into Helena's newer origin in the New 52 that he did in 1977.