The Best of the Huntress: All-Star Comics #69 Review 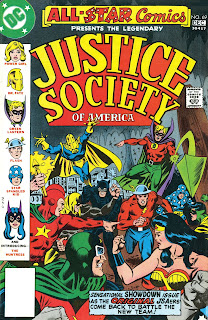 Introduction: In the same month that the Huntress made her comic debut in DC Super-Stars #17, she also made her first appearance in All-Star Comics #69 as a mysterious Bat person who's identity wasn't revealed until two issues later (or in DC Super-Stars where she was first outed as Helena Wayne). Consistent with Paul Levitz' earlier discussion of the character in 1977, Helena Wayne was intended from the beginning to succeed Bruce Wayne as the second generation Batman of Earth-2, and to occupy his seat in the Justice Society as the Huntress. The seeds for both ideas are present in this first issue of All-Star to feature the character.

Summary: The issue opens up with the Justice Society returning home to Earth-2 after an inter-dimensional team-up with the Earth-1 Justice League of America. At JSA headquarters, Alan Scott laments having to deal with bankruptcy and Jay Garrick thinks of arranging a vacation for himself and his wife, Joan. Inside the building, the JSA find police commissioner Bruce Wayne waiting inside with an arrest warrant. The Justice Society heroes are confused by this gesture since they've always thought of Bruce as their ally and never imagined he'd one day turn on them.

Bruce justifies his actions citing the JSA has been involved in various situations that were life-threatening to civilians, including property damage and destroying an entire airport. Doctor Fate finds the whole situation unreal since the JSA has always intervened in situations that were threatening to their entire world, and have always been mindful of avoiding situations that would result in casualties. Power Girl angrily confronts Bruce about his irrational behaviour and is subsequently attacked by a police officer possessing a gun capable of harming her when he perceives her as a threat. Power Girl is wounded in the altercation resulting in a brawl between the Justice Society heroes and the police officers.

Doctor Fate picks up the wounded Power Girl and condemns Bruce for his actions. He then advices the rest of the Justice Society heroes to depart in order to get Power Girl to a hospital as soon as possible. Bruce Wayne calls for some back-up of his own in the form of the retired Wonder Woman, Hourman, Starman, Doctor Mid-Nite, and his ward Dick Grayson as Robin. 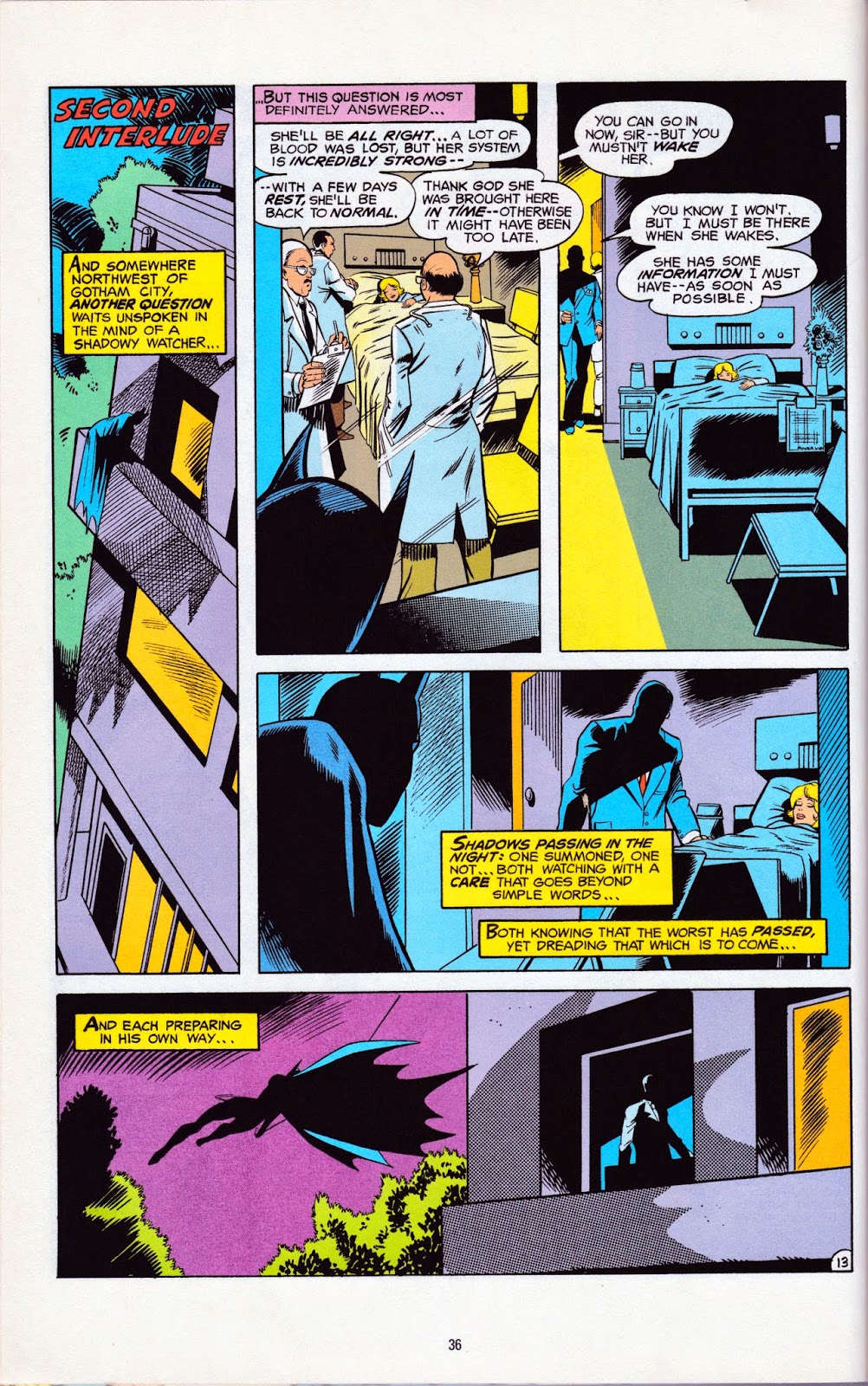 In the first interlude, the scene cuts to a hospital in the northwest of Gotham where the Justice Society leaves Power Girl to be treated for her injury. The team then departs to Wayne Manor to settle the matter with Bruce once and for all. Outside the hospital, a mysterious Bat figure is seen observing the situation from afar and thinks about how crazy the situation has gotten. The mysterious Bat person also laments having to intervene in order to prevent an unnecessary showdown.

The Justice Society arrives at Wayne Manor to find not only Bruce waiting for them, but some of their other comrades as well who have sided with him. With different members of the Justice Society knowing different versions of the same problem, a brawl erupts between all members as each seeks to discover the truth.

In the second interlude, the mysterious Bat person climbs the hospital wall from the outside and peers through Power Girl's room window. Inside Power Girl is lying on a bed unconscious with hospital staff surrounding her. After they depart, Clark Kent comes in to visit his cousin, and presumably learn the details of her assault. The mysterious Bat person then silently departs.

Back in Wayne Manor, the brawl amongst Justice Society members continues with Wonder Woman taking on Green Lantern, Robin against Hawkman, Doctor Fate against Hourman, Doctor Mid-Nite against the Flash, Starman against Star-Spangled Kid, and Wildcat against Bruce Wayne. It is unknown for how long the fights amongst the heroes lasts, but it is eventually halted by the intervention of both Superman and Power Girl (now fully recovered) who have deduced that Bruce Wayne hasn't turned against them, but has instead come under the influence of Psycho-Pirate trying to tear the Justice Society apart.

Doctor Fate casts a spell to relieve Bruce Wayne of Psycho-Pirate's influence, causing the latter to breakdown in despair when he realises what has transpired. Bruce apologises to Power Girl for hurting her and acknowledges the troubled state he's been in since the demise of his wife, Selina Wayne, a year prior. Power Girl forgives him and the two tearfully embrace. They are observed from a distance by the mysterious Bat person from earlier in the story who is revealed to be a woman in a Batman-inspired costume. She comments that everything will be alright and that her 'work can begin.'

Review: Admittedly, not a whole lot happens in this standalone story since it very much exists to accomplish one thing, and that is to introduce the character of the Huntress to the reader.

Within the context of the story, the Huntress herself isn't actually named (except on the cover) and she isn't given much to do, thus creating an aura of mystery around her character. As such, not much is learnt about the Huntress right away, but it is established very early on that she is an awful lot like Batman in that she is a detective who operates within the shadows. It is also implied that she operates in secret as she is seen actively avoiding the Justice Society and especially Bruce Wayne. 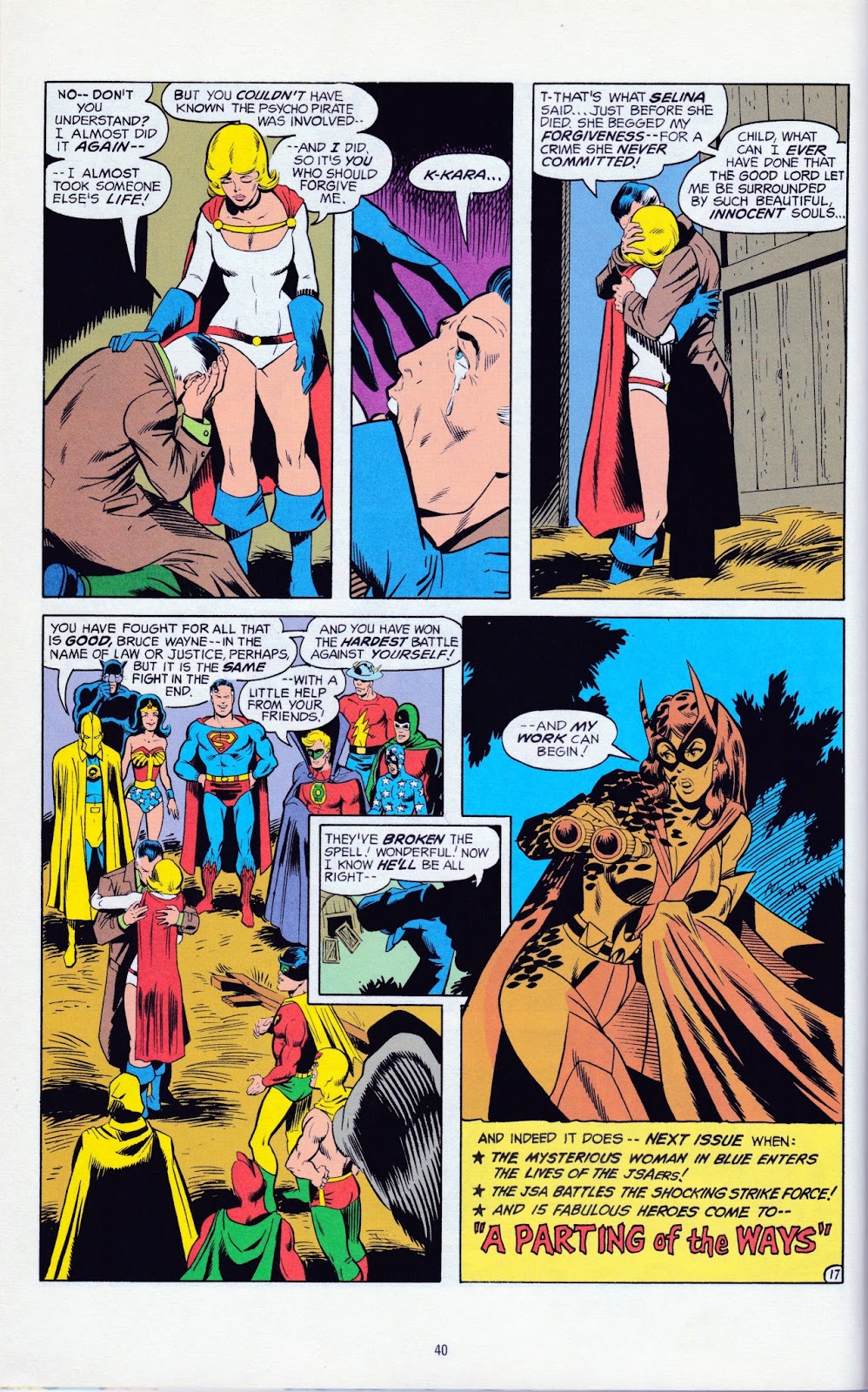 Another interesting bit about this first appearance of the Huntress in All-Star, is that her future friendship with Power Girl is immediately foreshadowed. All of her scenes in this story have consisted of observing Power Girl from a distance, and immediately establishes a concern for her well-being.

The only complaint I have about the way the Huntress is introduced in this issue is that the mystery of her character is immediately spoiled by two things. The first is the cover of this issue, which identifies her as the Huntress and shows a picture of her face, thus giving away the fact that the Bat silhouette present throughout this story is really her.

The second item that spoils the mystery of the Huntress is her origin story as told in DC Super-Stars #17, which came out the same day as this story. So if you read that story first, you knew right away who the Bat figure was, and if you read this story first, you still knew who the Bat figure was because the cover identified her right away. So there was considerable fail in execution on the editors' part if the goal was to create an aura of mystery around the Huntress to pique readers' interest.

Another significant development that's established in this same story that's going to be important later on is the declined trust for Bruce Wayne by the Justice Society (and to an extent, his own daughter), with this story being the starting point. The Justice Society's distrust of Bruce Wayne especially comes to a peak in the America vs The Justice Society miniseries where he once again betrays the Justice Society (posthumously) to the point of being brought to the US Supreme Court for trial. In that same story, Helena Wayne also started having mixed feelings about her father, thus diminishing her admiration for him a bit.

Other than that, there's really not much else to say in terms of story since it's mostly superheroes being pitted against one another and beating each other up. If you remember what it was like sitting through the second half of Man of Steel that was all 'crush, crush, crush, and demolish,' it's a similar case here with 'crush and demolish' being limited to Wayne Manor. We also never see Psycho-Pirate make an appearance throughout the story, nor do we ever learn his motive for invading Bruce Wayne's mind specifically for turning the Justice Society against each other. At best, it is implied that the loss of Selina Wayne left Bruce emotionally vulnerable, and therefore made him an easy target for Psycho-Pirate to exploit. Beyond that, this story was more exposition than anything else.

Whether or not Huntress ever deduced that her father was possessed by Psycho-Pirate is also never established. Either way, the real story of the Huntress' official inclusion into the Justice Society doesn't occur until the next issue, which will be reviewed next.