Breaking News! The Pre-Crisis Earth-2 Returns In Trade This July With America Vs The Justice Society! 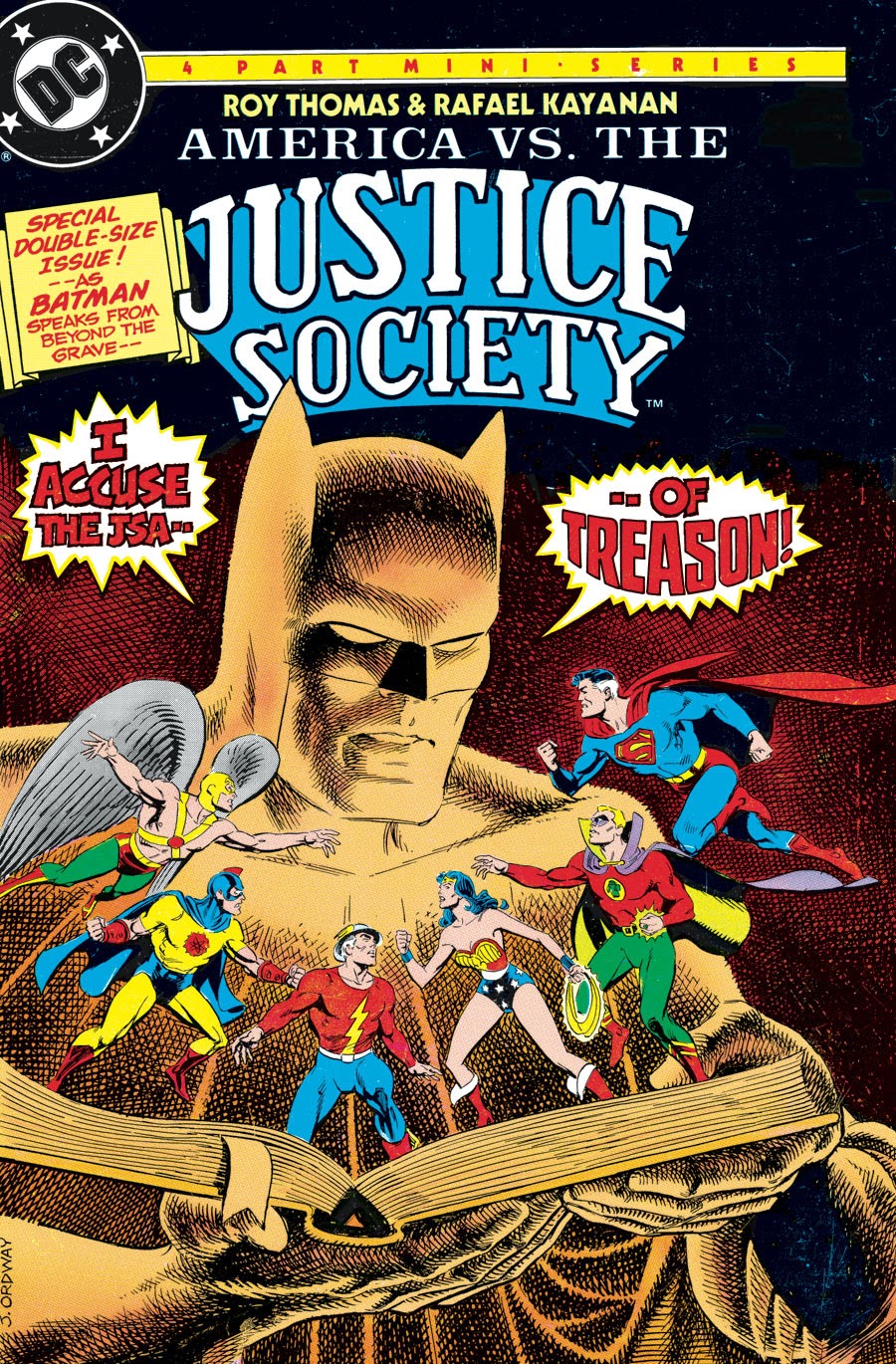 AMERICA VS. THE JUSTICE SOCIETY OF AMERICA TP
Written by ROY THOMAS
Art by RAFAEL KAYANAN, RICH BUCKLER, JERRY ORDWAY, ALFREDO ALCALA, HOWARD BENDER and others
Cover by JERRY ORDWAY
On sale JULY 22 • 160 pg, FC, $14.99 US
Following the end of World War II, Batman accuses the Justice Society of America of collaborating with the Nazis, which leads to a Congressional investigation that could mean disgrace for the JSA! Collects AMERICA VS. THE JUSTICE SOCIETY #1-4.

Finally, something good happening in July that's worth feeling excited about!

You know how long I’ve been waiting for this trade to come out? This is--in my opinon--the best pre-Crisis Earth-2 story ever told! If you want to dive deep into the history of the Justice Society on Earth-2, this is a damn good trade to get for that! This is also the same story where we see Helena Wayne functioning as a lawyer instead of as the Huntress for most of the story’s duration! What I wouldn’t GIVE to get THIS Helena Wayne and THIS Earth-2 back!

One can only hope the pre-Crisis Earth-2: Convergence books really outsell Earth-2: Society and DC actually publishes new books set within the continuity of this version of Earth-2! One can even continue to support the original Earth-2 post-Convergence by buying this trade in July! Honestly, it really is that good a story! And for $14.99, you literally can't go wrong with this since you're getting the real deal! It's certainly a better investment than paying $2.99 a month on an Earth-2: Society book that's not even taking place in the characters' own universe anymore. In case you're going 'huh? wut?' at that last sentence, here's the story:

The whole premise for Earth-2: Society debuting in June is seeing the characters usurp another Earth to rebuild their entire society from scratch after the events of Earth-2: World's End and Convergence left them all homeless. It's going to explore the theme of colonisation (and subsequently, colonialism), which is a neat idea for an Image comic, but not the story I want to get out of the Earth-2 Justice Society franchise. Also considering that DC went out of their way to waste everyone's time AND money undoing all of the initial world-building of James Robinson's run with Earth-2: World's End, why should I care to invest in their 'New Earth-2' now? What's there left for me to care for now that the characters are even more far removed from their own history and legacy than before? I'd be an idiot to waste more money on the same hacks who destroyed everything that was good about Earth-2 to start with, and replaced it with something less than inferior.

Between paying a small amount a month for a 20-page comic that's likely to be complete schlock in the less skilful hands of a less knowledgeable writer (and worse yet, an incompetent editor), and paying a lot more for a 160-page trade that actually has quality writing, the characters are written with love and respect, I'll spend a lot more and take the latter. With the latter, you're getting a more heartfelt story written by people who loved the lore of the Golden Age Justice Society, and expanded the mythology of these characters through the parallel world known as Earth-2. It was written by writers who took these older characters in bolder, new directions without actually disrespecting what came before.

In contrast with what we have today, any changes that were made to the Golden Age characters in the later decades actually felt like a natural progression of things rather than an abrupt change to the status quo. It especially helped that these characters had at least 17 years of stories for future writers to build upon, even though these stories were decades old. The same cannot be said about the current Earth-2 that has been a radical departure from the original concept in a really damaging way. Even less positive things can be said about the current team that is developing this franchise, as they have more than demonstrated a lack of love and respect for the lore of these characters. To the current team, they're nothing more than alternate universe characters they think no one cares about, which has left many fans of these characters (like myself) feeling frustrated in more recent times. At least, that's how it's felt like these past three years.

With all the schlock I've had to sit through as an Earth-2 Justice Society fan (worse in the last year than not), you can pretty much count on me pre-ordering the fuck out of this trade. With all the goodness America vs the Justice Society has to offer, I actually have something positive to review this July! It's actually a good thing I didn’t review this story already, or I would've posted the original comic scans that aren’t so pretty in print!
Posted by Diane Darcy at 18:40