The Best of the Huntress: Wonder Woman #299 Review 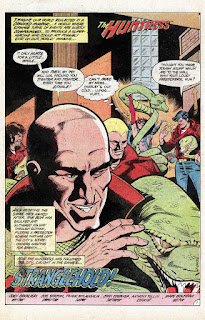 Summary: The Huntress has found the hideout of Toro and the Boa, but they weren't without any surprises of their own. Having unleashed one of the boa constrictors on the Huntress--Rosemary--Toro and Boa make their escape. With Rosemary having a strong stranglehold on her, the Huntress tries to prevent the boa constrictor from killing her by holding her breath. She is unable to hold it for very long, and the boa constrictor tightens her grip on the heroine after every exhale, causing her to nearly pass out. She is then rescued by Charley Bullock who wakes up just in time to kill the snake.

Charley explains to the Huntress that he had been faking his unconsciousness from the moment he was captured, even left a microcassette recorder recording in his utility belt for evidence. He further explains to the Huntress his decision to become Blackwing, feeling that Gotham was in need of a new "bat-like" protector following the death of the original Batman. He felt that Batman helped to keep Gotham safe and it was this desire to keep the city safe that inspired Charley to pick up the mantle. The Huntress reassures Charley that he didn't need to explain his decision to put on a costume and that the real Batman would've been proud of him for wanting to protect the city. She also tells him that she's proud of him as well.

With Charley's evidence in hand for the police, the Huntress follows Toro and the Boa to their "meeting," using the same tracking device she tagged their car with earlier. On arrival, Huntress sees that regular store owners are being intimidated into paying their "insurance" to the mob. Huntress disrupts the meeting by taking down both of the mob leaders--Toro and Boa--and leaving them for the police to find. At the conclusion, Huntress finds herself questioning whether or not she should hang up her cape and leave her police work to the police. After thinking about it, she concludes that all she has done as the Huntress has been worth the journey. 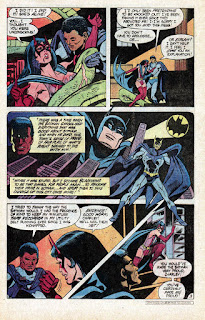 Review: Story-wise, this wasn't a very memorable story arc. It was a very run-of-the-mill, street-level crime story. However, it wasn't the story itself that made Joey Cavalieri's first take on Helena Wayne remarkable, but rather the work that he did on the character and her supporting cast.

At the conclusion of this story arc, Cavalieri starts taking the character of Helena Wayne in a more introspective direction. While Paul Levitz did have the character question herself at times during his run, a lot of the times, Helena's self criticism and introspection was very short-lived and often contained within each individual story. It was never a continuous part of her heroic journey, and that's one thing Cavalieri does differently in his run.

In fact, with this story arc, we start to see the beginning of Helena's introspective journey as both Helena Wayne and the Huntress, and how she balances out both sides of her identity. At the conclusion alone, we already start to see Helena consider the possibility that maybe her work as the Huntress is unnecessary, and that maybe the police are in fact capable of doing their own jobs.

On Charley Bullock's side of the story, this is sadly the last we see of him, as nothing more was done with his character following this very brief trek into the superhero lifestyle. It's a bit of a shame because he did demonstrate strong potential for further character development at the conclusion of this story, and there was plenty of story left to be told with his character. Would he have eventually figured out that the Huntress was his associate Helena Wayne the whole time? How would he have come to that conclusion? Would he have made the connection between the kinds of cases the Huntress took on and which ones Helena Wayne was interested in?

Would he have similarly noticed a recurring pattern of the Huntress showing up at the same exact places as Helena Wayne, or going missing at the same time as Helena Wayne? Would he have similarly figured out that his other associate, Richard Grayson, was Robin and the ward of Helena's father, Bruce Wayne? Would he have eventually figured out that Bruce Wayne was the Batman, and subsequently realised that Helena Wayne was the Batman's daughter the whole time? There was a lot of unrealised potential with Charley Bullock's character that sadly went unexplored, in part due to the Crisis on Infinite Earths reboot. I can't help but wonder each time what could've been had that reboot not taken place at all.

Beyond the character work that Cavalieri started building upon with the characters Paul Levitz co-created with Joe Staton and Bob Layton, there's not a whole lot more left to say. At least until the next story arc, anyway, where Cavalieri starts to dissect Helena Wayne's complicated relationship with her boyfriend, Harry Sims. This particular chapter was very much just the conclusion, resulting in a rather short review. So really...until next time.