Top 5 Times Helena Wayne Hinted She May Be Bisexual 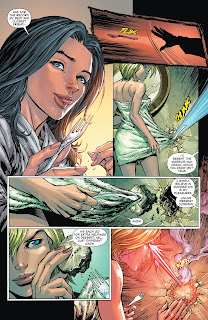 June is Pride Month for the LGBTQA community, and for years I've been wanting to write about Helena Wayne's bisexual behaviour in the comics. Everything from pre-Crisis to post-Crisis to post-Flashpoint, there has been a treasure trove of evidence that seem to suggest Batman and Catwoman's canonical Earth-2 daughter may be attracted to more than one gender.

While Helena Wayne has historically only had one confirmed romantic partner—District Attorney Harry Sims—writers also couldn't resist teasing romantic attraction between herself and her father's ward, Dick Grayson, as well as writing her friendship with Power Girl in ways that play into romantic tropes. In the latter case, it's especially hard to overlook the queer subtext.

Despite neither DC Comics nor Huntress co-creator Paul Levitz ever explicitly confirming Helena Wayne's sexuality, there are plenty stories with the character for readers to examine and draw our own conclusions. Based on the way Helena Wayne has interacted with various characters as both the Huntress and as herself across three different continuities, I would argue that she is indeed bisexual. 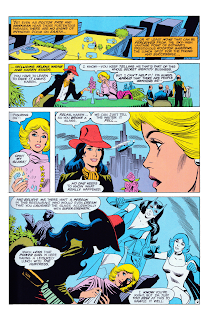 Through the entirety of pre-Crisis DC, Huntress and Power Girl's friendship has been depicted as largely platonic. At best there were instances in Crisis on Infinite Earths where Huntress would wrap her arms around Power Girl as a way of comforting her. There was even one instance in Huntress' own solo series where Power Girl held Huntress like a bride while the two were arguing with Huntress' boyfriend in his own office. (Talk about awkward!) However, none of this compares to the romantic lunch scene the two women shared in All-Star Comics #74.

From the way the scene is setup to the way the characters interact, the lunch scene in All-Star Comics #74 has all the makings of a romantic trope. Both women are seen dining at an expensive restaurant atop of a Gotham skyscraper, complete with a romantic table setup as evidenced by the presence of flowers, which Helena notices. Helena is even very well dressed for the occasion as opposed to the more casually dressed Karen Starr (aka Power Girl). Throw in the fact that both women get googly eyed with each other, and Helena even pays the cheque for both of them, I'm pretty sure this is a bit more than just a casual outing between two best friends! 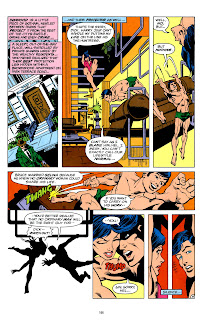 Over the course of Helena Wayne's solo adventures as the Huntress, she has made a variety of friends and foes, some of which have been teased as potential love interests. Some of the more notable ones include her actual boyfriend, Harry Sims, and two other men who have expressed romantic interest in Helena, such as Tom Kelly and Gary Minelli. However, apart from Harry, the only other man who has managed to pique Helena's interest romantically is her father's ward, Dick Grayson.

Dick himself is a bit of an odd choice considering he was loved and raised by Helena's father like a son, and Helena even thought of him as a brother. However, a conversation between her and Dick over her turbulent relationship with Harry got her to reconsider her thoughts on that. The moment Dick suggested she needed to pursue a romantic relationship with someone who would love and understand her as she is—superhero lifestyle and all—she started looking his way. Dick even found himself looking at Helena in a brand new light, but decided not to pursue those feelings further, much to Helena's dismay. I guess it just wasn't meant to be, Helena. 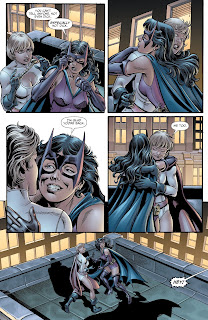 Post-Crisis DC was a very weird time to be a Huntress fan, particularly because the character of Helena Wayne got retooled into a brand new character called Helena Bertinelli in order to fit the direction of the new DC Universe at the time. As Helena Bertinelli, Batman and Catwoman were removed as the Huntress' parents and the character was given a whole new history. However, some concepts are in fact too good to leave in the dust bin, and eventually, the original Helena Wayne Huntress resurfaced, complete with a slightly new history.

Following the events of Infinite Crisis, a new Earth-2 emerged complete with new iterations of Helena Wayne and Dick Grayson as its residents. Just like in the pre-Crisis continuity, Helena was once again in a romantic relationship with Harry, but openly admitted she was not in love with him because there was someone else in her life she wanted to be with. Power Girl automatically assumed this person was Dick Grayson, but Helena neither confirmed nor denied her assumption. Instead, Helena implied that she does love Dick romantically, but also made it clear throughout the JSA Annual #1 story that Power Girl was the person she was yearning for the most. So maybe Power Girl was half right? 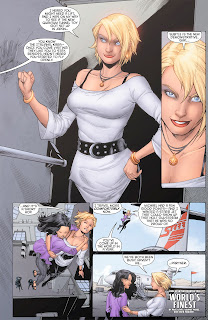 Following the events of Flashpoint, the DC Universe once again experienced a cosmic reboot. In this new universe, the post-Crisis Helena Bertinelli was retconned back into Helena Wayne, complete with regaining Batman and Catwoman as her parents. But something was noticeably different about this new Helena Wayne. In addition to the fact she still retained the 'Helena Bertinelli' name (until she no longer needed it) and retained some of the 'Bertinelli' personality traits and costume, Helena Wayne behaved more openly queer in her post-Flashpoint miniseries.

In Huntress #1 alone, Helena allowed the bellboy at her hotel to think she was gay in order to request a female sex worker as part of a case she was working on. In Huntress #4, she flirted with male henchman while wearing a bathing suit in order obtain information. But it was really in Huntress #6 that truly setup the nature of Helena Wayne's relationship with her iconic Kryptonian best friend. While running from the cops at an airport in Italy, her best friend, Karen Starr (again, Power Girl), was waiting to pick her up. Upon seeing each other, Helena got all googly eyed while Karen gazed back at her with confidence. Karen quickly rescued Helena from her dilemma, and once again gazing at each other, Karen tells Helena 'we've both been busy, haven't we...partner.' Hello there! 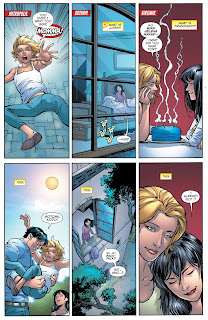 When it comes to the Huntress and Power Girl-centric Worlds' Finest series, there's little that's memorable about it story-wise, but it really does standout as one of the comics with the most queer-heavy subtext. While writer Paul Levitz never explicitly confirmed whether or not Karen and Helena were a romantic couple in the current continuity, that still didn't stop him from writing them in romantic situations. Everything from the two women holding each other to going on picnics and dinner dates, to even being perfectly comfortable undressing in front of each other. Helena even flirted with Karen in one scene after the latter took a shower and pinned her towel to a wall with her fork.

Even with Karen dating men in Worlds' Finest and Helena somewhat confirming she is interested in men, there is no denying that the level of intimacy the two women displayed went above and beyond what's appropriate for a platonic friendship. So much to the point that a queer female writer, Marguerite Bennett, noticed and may have even confirmed Helena's romantic feelings for Karen in her story for Earth-2 #27.

In one of the flashback sequences in that issue, Karen celebrated Helena's birthday sometime after both women ended up on the main DC Earth following the deaths of their families in the Apokolips War on Earth-2. Helena was mostly brooding over that loss, but quickly cheered up when Karen made her a birthday cake. When asked what she wished for, Helena told Karen she already got her wish and rested her head on Karen's shoulder, heavily implying she is with the person she wants most in the world. If that's not love, I don't know what is, especially when the scene heavily alludes to the final scene of the 1984 film Sixteen Candles!
Posted by Diane Darcy at 00:00