I don't know what stories will be collected in the Celebration of 75 Years trade, but judging by the names listed in the credits, it'll include stories from the pre-Crisis Earth-2 up to the Geoff Johns run of the post-Crisis Justice Society of America title. I do, however, highly recommend America vs the Justice Society since it explores the history of the Justice Society on the pre-Crisis Earth-2. It's also the only story where we see the pre-Crisis Helena Wayne functioning as a lawyer. So Helena Wayne fans! If you want to know what the character was like prior to the New 52 and DCYou, here’s your chance to meet her! :)

Here are some links! 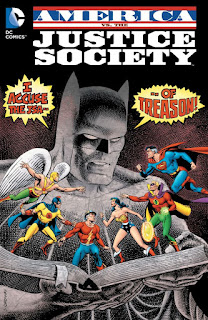 Do you swear to tell the truth, the whole truth, and nothing but the truth? Years after his death, Batman’s diary is made public only to excuse his old teammates, the Justice Society of America, of being Nazi collaborators with Hitler himself. Not wanting to fight their own country, the Justice Society surrender themselves to the law and now stand trial for crimes they did not commit.

Who is the mastermind behind framing the World’s Greatest Superheroes? And why would they tarnish their pillars of society? Written by the legendary Roy Thomas with illustrations by an all-star team of Jerry Ordway, Rafael Kayanan, and others, this classic tale collects AMERICA VS. THE JUSTICE SOCIETY #1-4. 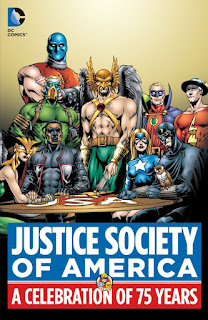 Comic book history was made in 1940 with the introduction of the Justice Society of America in ALL-STAR COMICS. Hour-Man, Doctor Fate, The Spectre, The Sandman, The Atom, The Flash, The Green Lantern and Hawkman all became acquainted with one another and the world met its first super-hero team!

In the seventy-five years since their inaugural meeting, new generations of heroes including Superman, Wildcat, and Wonder Woman have come to the table with the purpose of protecting the DCU with their combined crime-fighting powers! From their first momentous team up by Gardner Fox and Everett E. Hibbard, to their modern member rosters by David Goyer and Geoff Jonns, JUSTICE SOCIETY OF AMERICA: A CELEBRATION OF 75 YEARS collects stories that unite DC Comics heroes over time and throughout the ages, from such legendary talents as Roy Thomas, Dennis O'Neil, Paul Levitz, Robert Kanigher, James Robsinson, and more!
Posted by Diane Darcy at 16:22