I ♥ Huntress, Day Zero: Why I Love Helena Wayne 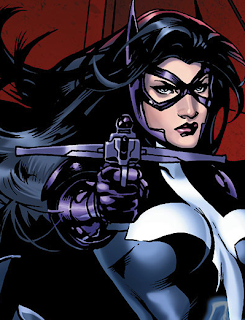 If there is one character I wish I had growing up in the 1990s, it is definitely the Helena Wayne version of the Huntress.

Aside from the fact that Helena Wayne is the canonical daughter of my unsinkable DC ship, she is, to me, more than just the daughter of Batman and Catwoman taking on a rich legacy. She is also an empowered heroine who brings attitude to her work, is highly intelligent, athletic, quirky, and very passionate about the what she does. She could hold her own in a fight without needing to be rescued and she was a very prolific lawyer in her civilian identity.

While I definitely didn't practise law as a little kid, these were, nonetheless, traits I could easily identify with. They were also traits I wish I could have seen more of from female characters in the various franchises I grew up with. The fact that DC Comics did away with such a phenomenal character within the first decade of her publication history while she was still developing into an interesting heroine (and at the peak of her popularity at that) felt like a great disservice to her character. I did in fact feel the pain of her loss two decades after she was initially erased from continuity. I also felt that I had been cheated out of getting to know a character that I know would have empowered me growing up.

One of the things that has always appealed to me about Helena Wayne's Huntress is the most obvious: she is the daughter of Batman and Catwoman. Considering how the comics industry has always had a reputation of being a 'boys club,' it is a pretty big deal to me that DC Comics even allowed their most iconic hero to have a daughter succeed him in the role of Gotham's protector and be good at it. What's more is that she isn't Bruce Wayne's daughter with just anyone. She is also the daughter of the woman he chose to marry and spend the rest of his life with, the equally iconic Selina Kyle. The fact that Selina is as much an important part of Helena's upbringing as Bruce is, is a pretty big deal too when you consider how often wives and mothers are tossed into the sidelines in most narratives. These developments not only demonstrated to me a strong desire for inclusivity of more influential female heroes on DC's part, but it also made a pretty strong statement about the value of marriage as a positive chapter in the lives of DC's superheroes.

Another thing that appealed to me about Helena Wayne is that despite the rich history that came with her birth and upbringing, she also chose an identity that was not adjunct to either of parents but honoured them at the same time. This was a development that was truly unique to Helena Wayne in a way that went unparalleled with other heroines who also got their inspiration from either Superman or Batman. She is as skilled and meticulous as her father, as sharp and witty as her mother, but she also brings something of her own to her work. She has a unique approach to crime-fighting in that she sees it as both her birthright and an obligation that she has to the people of her city. She is both compassionate and aggressive in her pursuit of justice. She can either be thought of as the strangest woman one will ever know, or a hardass who cracks down hard on criminals.

As a woman, she is more than just 'Gotham's Rich Princess' who follows in her father's footsteps, she is also a well-respected lawyer in the criminal justice system, and a valued team member of both the Justice Society and Infinity Inc. She is recognised for her intelligence and her achievements, she has her own ideas about life and relationships, and pursues both the way she sees fit. Sometimes she is successful, other times not, but regardless of the circumstances, she remains forever confident in her abilities.

The final thing that appealed to me about Helena Wayne is her close friendship with Kara Zor-L, alias Power Girl. Aside from the fact that Huntress and Power Girl are very much the female equivalent of Batman and Superman for the World's Finest title, I very much like the fact that they're more than just each other's partners for fighting off world doom and cancelling every iteration of the Apokolips apocalypse. They are also each other's confidantes who are always there for each other in times of need. They can be seen comforting one another whenever one is experiencing a rough patch in their life, and they can be seen going to lunch or dinner together on their regular schedules to talk about normal everyday activities that have absolutely nothing to do with superheroics. Not only is it great and refreshing to see positive depictions of female friendships in a narrative that doesn't involve rivalry over a lad, but I really love seeing how completely grounded these two women are in their personal lives in a way that does resemble real life friendships. They do normal things together that most women do in real life, and enjoy a lot of the same simple pleasures in life despite leading extraordinary lives in extraordinary circumstances. 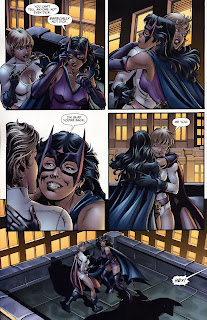 Given how much a character like Helena Wayne has to offer, it saddened me greatly how quickly she was robbed of a lengthy publication history and further development as a character who is also Batman's canonical daughter.  A character like Damian Wayne survived his first reboot with his entire origin as Batman's son intact, whereas DC Comics felt Helena Wayne had to lose hers in order to 'convenience' their post-Crisis continuity.

Not only is it a callous move on DC's part to play with fans' emotions like that, but it especially doesn't encourage fan support of both versions of the character by turning her into an 'either/or' deal, meaning that fans can't have both versions of the Huntress co-existing in their respective universes, completely baggage free. They literally exchange one Huntress for another and they also develop whichever version they decide to go with at the expense of the previous one.

While I think it's rather unfortunate that DC Comics has not learnt from the mistakes of the Crisis reboot, and I especially find it disheartening that much of what was original about Helena Wayne was lost with the New 52 reboot, I do, however, remain optimistic that one day someone will get it right. I maintain the hope that someone will recognise how much Helena Wayne means to her fans and how important she is to the Batman mythos, even if she is from a parallel universe. I similarly maintain the hope that one day future writers will choose to develop Helena Wayne in a way that makes sense for someone who is Bruce Wayne's daughter with Selina Kyle, and will one day be able to reclaim her place on Earth-2, alongside her amiga, Power Girl.

On that same footnote, I do hope that DC Comics will one day recognise Helena Bertinelli's importance not just to her fans, but also to their mission statement for diversity. Given how very different she is as a character from that of Helena Wayne, there's really no reason why this character can't be established as her own separate character, completely free of the baggage that comes with being a new origin for the Huntress. In my mind, this is a character who is capable of developing into a heroine of her own making without needing to fulfil the role that is best accomplished with Helena Wayne's Huntress. Given that her own origin story provides a unique backdrop that sets into motion Bertinelli's motivation for becoming a costumed heroine, I feel that this could easily be explored further and could even lead to a very different kind of storytelling that doesn't rely on the Batman mythos. Her story is her own with a unique purpose. If she so chooses to be a part of the Bat family, it should be out of her own accord and not out of some inexplicable need to be 'seen as a daughter' by someone she has relation to. It simply doesn't make sense for her character.
Posted by Diane Darcy at 14:03