The Best of the Huntress: Wonder Woman #286 Review 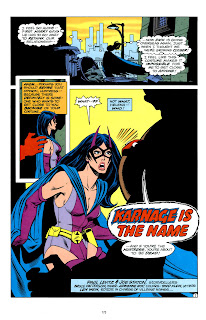 Summary: The Huntress had just stopped a hospitalised convict from killing her boyfriend, Harry Sims. Helena Wayne had just started growing closer to her father's ward, Richard Grayson. Yet, she walks alone on a chilly day in Gotham introspecting about the limitations of the superhero life. She enjoys the thrill of being able to stop a crime from happening, but she also enjoys having relationships in her life. Which is more important to Helena, and which is she willing to sacrifice?

As the Huntress thinks about the choices she's made, she's quickly met with a new adversary--a man named Charlie Karnage, or simply just 'Karnage' as he prefers to be known. Why does he personally hate the Huntress and why does he want her dead so badly? After all, this is the first time they've met. Or have they? Has the Huntress done some kind of damage to Karnage to warrant his attack on her? Does he know she is Helena Wayne as well if he knew where to find her in her civilian identity? And who is his mysterious employer? Things are about to get turned upside down for the Huntress as an encounter from the past is about to turn deadly.

Review: One of the most defining chapters in the Huntress' pre-Crisis life begins in this first instalment of an 8-chapter story arc. Not only will the character face her first real adversary that will disrupt her moral code in a very personal way, but this first brush with the darker side of Helena Wayne's personality will also decide how she deals with dangerous threats from this point forward.

Prior to this chapter, Helena Wayne was highly confident in her abilities to the point of stepping up to the challenge of taking on her father's legacy as the Huntress. She was, after all, an exceptional athlete, very well educated, and prodigiously intelligent. Like her father before her, Helena did not need to rely on any special powers or tricks to take on (and defeat) her enemies. She only needed to exploit a weakness and use it to her advantage. She often accomplished this effortlessly since the majority of her enemies were well known Justice Society villains, or villains her father had fought repeatedly throughout his lifetime. Even when she didn't know how to defeat a powerful enemy like Solomon Grundy, she still relied on her intelligence to get herself out of every situation. She often came prepared, often observed her surroundings, and manipulated them to her favour. That was all prior to this chapter. In this one, we start to see the reverse happen: what happens when a villain finds a weakness in the Huntress that they can exploit? 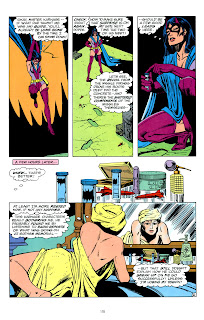 When we first see Helena in this chapter, she is emotionally vulnerable. Coming at the heels of her fight with Lionmane to defend her mother's honour, followed by the Joker, followed by Edgar Stenville, and then the convict at the hospital (seemingly back to back), the Huntress has had a pretty exhausting week. Despite an overwhelming turn of events for the young heroine, Helena remained optimistic and took comfort in the relationships that she has. That was until Harry Sims decided to 'take a break' from her to rethink their relationship (which to her sounded more like a real breakup), and things with Dick Grayson weren't any better. Despite the two individuals thinking of each other as family, Dick still decided to leave Gotham (and Helena for that matter) to 'rethink' his relationship with her as well, but for entirely different reasons. While Harry's dilemma is stemmed on the fact that he cannot accept Helena's vigilante lifestyle, Dick's dilemma is stemmed on the fact that he loves Helena in a more romantic manner and not as a 'little sister' like before. This leaves Helena feeling blue and pensive.

Throughout this chapter, Helena continues to introspect on the pros and cons of the superhero lifestyle. Is it worth sacrificing a normal life with normal human relationships to do justice 24/7 as a public service? Or does she, perhaps, want to have a normal life with those normal relationships as well? One of the major cons for her is that she feels very much alone once she takes off the mask. As much as she loves and values the Justice Society heroes as her friends and family, they're also only mostly united through world catastrophes and the supervillains they fight. Beyond that, the Justice Society heroes rarely meet in their personal lives except during holidays and/or when a friend is in need.

The closest Helena has to a regular friend in the Justice Society is Kara Zor-L (Power Girl) whom she does meet with on a somewhat regular basis outside of Justice Society initiatives. Outside of Kara, Helena mostly only has her coworkers and Dick Grayson whenever he's in town. With her family dead (minus Alfred), she can't really reveal too much about herself to anyone without endangering them. She also rarely has anyone she can turn to for comfort when her superheroic endeavours cause her distress because--once again--the JSA heroes have lives of their own and most don't reside in Gotham.

The page that best illustrates Helena's inner conflict in this regard is the one where she goes through her childhood belongings thinking about how important those items have become to her once the people attached to them have died. The imagery by Joe Staton is very haunting, which helps to convey that sombre feeling of loneliness that Helena is experiencing. When she especially pulls out her diary that she had when she was about six years old, she looks sad as she reads those very innocent, yet hopeful entries she wrote as a child where she expressed an interest in being a hero like her father on the night he revealed his identity as Batman to her. It was as if she was trying to remind herself why she decided to embark on this journey in the first place, especially given the sacrifices involved. It was very solid writing on Levitz' part, especially since it gave insight not only on Helena's childhood, but how her own family history influenced her own personal identity as well as the choices she made as an adult. 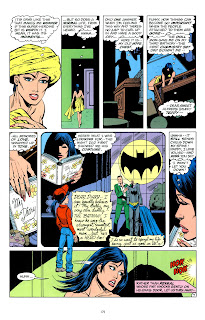 The only issue that I can find with this story arc so far is the villain, Charlie Karnage. Not only is he the second black man to get introduced as a criminal in a Huntress story, but he's the second black male criminal to be characterised in a highly stereotyped way to the point of caricature. Not only does his stereotyped characterisation reinforce a very damaging image of black men in America, but it's a problem that isn't helped by the lack of POC representation back in 1981 when this story was first published. Throw in the fact that he is not established as the main villain in this story but as a pawn for a previous white male villain, this unfortunately puts him in a more expendable position, which means that this character is highly likely to be disposed of later once he serves his purpose. In other words, he's more of a plot device rather than an actual character in this story.

The only saving grace on the front of POC representation in this story arc is Helena's associate Charlie Bullock who is presented as an associate of Cranston, Grayson, and Wayne. Though not given much to do other than attempt to defend Helena against Karnage, he at least helps to balance out the otherwise racist caricature of Charlie Karnage. His actions in this story arc will also be important in a future story arc that will see him take on a different role than simply being a different face in Helena's law firm.

While not perfect, on the whole, this story arc is a thoughtful character piece for Helena Wayne. Not only does it have the character introspect on what's more important to her, but it especially sets up for what is yet to come for the character. Prior to the events of this story arc, Helena Wayne is a really confident heroine who fights crime as a public service in Gotham. This story arc, however, will prove to be a game changer for her, and will certainly challenge her limits as a heroine as the threats get more personal in the upcoming chapters.