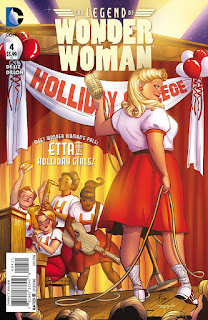 Summary: Diana has left the familiar boundaries of Themyscira and into the world of the unknown. Throughout her life she heard horror stories of constant strife in the outside world and the untrustworthy nature of men. It was assumed that a combination of both ingredients would result in the death of all life in the outside world. But what Diana finds upon opening her eyes in this new world is anything what but the Amazons described.

Even with the existence of strife--the strife known as World War II--the outside world is actually flourishing with life. The sun remains as bright, the grass is just as green on the other side, and the people she meets are full of life, love, and happiness. What is this strange new world and why have the Amazons told her otherwise? As Diana begins her sojourn into the outside world, she meets all kinds of people who will become her greatest friends and allies, and even some of her most dangerous foes. Everyone from the elderly couple that nursed her back to health after a turbulent storm knocked her off course, to the flamboyant Etta Candy and the Holliday Girls, to the infamous agent of Ares, the Duke of Deception!

Review: After the first three chapters focused on Diana's life on Themyscira, chapter 04 begins to see her journey into the outside world. Believe me when I say, I couldn't wait to review this issue a few months ago!

Several things happen in this fourth issue. First, we get Diana's reaction to the outside world. One thing that writer Renae De Liz does very well in this chapter is present Diana's culture shock in a way that feels natural for her character. On Themyscira, Diana was always presented as reserved and respectful, but also determined and passionate about the things she believes in. When she first meets the old couple who nursed her to health in this issue, she's very quiet and reserved, but mostly because she does not know how to behave around these individuals. They converse with her in ways she's not used to, and they talk to her about things that are similar but also very foreign to her. For example, she understands the value of love and family, but doesn't understand why an elderly woman would just give her an item of value that was made in memory of her grandson. She's reluctant to accept such a precious gift, but ultimately takes it at the old woman's insistence. The item that she receives from her is an American flag that she made for her grandson's return, and this flag will be important to Diana later. (Though you can already begin to guess how). 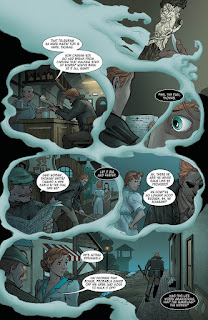 As Diana departs in search of a way back home to Themyscira, she starts to feel helpless for the first time because she doesn't know how to get back and that's something that frightens her in a quiet way. Another thing that frightens her as well is that she doesn't know how to interact with other people that she meets. This is most notable when she accidentally stumbles upon a college party at Holliday College and meets various college students who find her strange. She also meets her future best friend, Etta Candy, and her future allies, the Holliday Girls, in this setting.

I really have to give it to Renae De Liz for really doing her research on the Golden Age Etta Candy. Her characterisation of Etta is very spot on with the character Charles Moulton Marston created 75 years ago, and she's every bit as lively as the original character. One of the things that always stood out to me about the original Golden Age Etta is how full of life that character was, and the fact that she was never burdened by society's cookie-cutter standards of beauty (something that unfortunately changed with the Silver Age).

The Golden Age Etta Candy always had an exuberant personality, was always very confident in her abilities, and she had an unwavering love of sweets (hence her name 'Etta Candy'--an obvious pun on the fact that she always ate candy). She was also very interested in fashion, pop culture, and men, but she also never allowed anyone to bully her, or decide for her what she should like, what she should eat, what she should wear, etc. Etta was not only the 'every college woman' in the Golden Age Wonder Woman comics, but she also lived by her own standards and she was very accepting of other people who were different like her. I will never forget her very famous 'nonsense dearie, my constitution has room for lots of amendments' line in Wonder Woman #1 in 1942.

De Liz successfully captures all of the charm described above in her version of the character in this one issue alone. In this one issue, De Liz establishes right away that Etta wants to pursue a career in entertainment, she's very popular amongst the Holliday College students (and has her fair share of rivals as well), and immediately shows Diana compassion when she finds herself in unfamiliar territory, rescuing drunk college students from themselves, and people looking at her like a circus freak. She also doesn't leave out the fact that Etta loves sweets (and even acknowledges the pun in her name in text) but also tones down the extent of that love of sweets so as to avoid stereotyping her as a large woman.

De Liz' Etta Candy is still large in size, but is also very proud of her size just like the original Golden Age Etta was. It was definitely very exciting to finally see Etta enter the page in this issue because she provides a very strong contrast to Diana. Whereas Diana is conventionally beautiful by American society's standards (blue eyes, silky black hair, tan skin, slender body, even if she's very tall and a bit muscular), Etta is the flipside of the coin on that front. Despite being equally attractive herself (blue eyes, blonde hair, curvy), Etta isn't thought of as conventionally attractive by American standards (even in 1944--the setting of this comic) because American culture (as with all western society) has a very limited idea of beauty. De Liz acknowledges this reality in her comic, most notably when she juxtaposes Etta with Pamela Smuthers who looks like a supermodel. De Liz, however, also challenges this very limited view of beauty by depicting Etta as celebrating her own appearance, and by not being easily putdown by either Pamela's bullying or contempt for her. She also 'fights back' by asserting her thoughts without sinking to Pamela's level. De Liz also establishes in this issue that men find Etta very attractive but that Etta also has standards on what kind of men she likes. She has a very well-rounded personality. 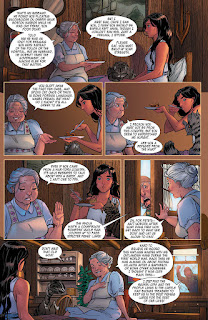 All in all, De Liz' characterisation is flawless and very true to the spirit of the Golden Age Etta Candy. She doesn't just capture the character's flamboyance in writing, but also in her pencil work, again producing a strong contrast with Diana who is very reserved for most of this issue. De Liz is very skilled at capturing body language and providing all of her characters with very distinctive looks. She doesn't just do this for Etta, Diana, and Pamela, but also for the college students Diana encounters, and even the elderly couple who appeared earlier in the issue. Even her elderly couple felt like very real human beings with very distinct personalities and values, which provided a huge contrast to those of the college students. Definitely, one of De Liz' strengths as a writer is solid characterisation that feels very human and tangible.

Aside from Etta, there is one more character who makes their debut in this issue: Thomas Byde, who also becomes the Duke of Deception in this issue--one of Wonder Woman's iconic villains from the Golden Age era. While we don't see much of him in this issue, De Liz' characterisation of him prior to his transformation is also very heartfelt. We meet a man who is at the lowest point of his life, complete with alcoholism and thoughts of suicide, but it's also presented in a very respectful manner that isn't too triggering for people who have experienced both. (I would know because I've experienced both in my life). De Liz not only sells his character in writing, but also in the art, which is where his plight is more strongly felt. It's not just her use of light and shadow that sells it, but it's also the way her husband, Ray Dillon, conveys the same emotion through his use of colour, specifically by using a teal colour palette to convey feelings of sadness and depression. Contrast that with the way he uses a brighter colour palette for the more lively Etta Candy, and the sombreness of Byde's character really sinks in.

Last but not least, this issue does contain one Aquaman easter egg, namely in the form of the elderly husband from earlier claiming to have found Atlantis during one of his fishing trips. This effectively establishes that the larger DC Universe does exist in Wonder Woman's world. This is especially great because it does solidify what De Liz has consistently said on social media about having her own version of the DC Universe mapped out on her mind and would like to further flesh out. Frankly, I would love to see more of that world building myself because she really is off to a great start with this comic by far. If you're not buying this comic already, you definitely should! It really is compensating for the lack of a proper Golden Age continuity in the current mainstream DC Universe, enough for me to say I really wish De Liz' DC Universe was mainstream Earth-2 canon. If the goal of the New 52 (and subsequently Rebirth) is to reimagine the DC Universe for a newer, modern audience, De Liz definitely did it right for the Golden Age continuity with this comic. If her DC Universe had been Earth-2 canon from the start, we would probably be looking at very different sales figures for Earth-2 right now.