The Best of the Huntress: Wonder Woman #289 Review 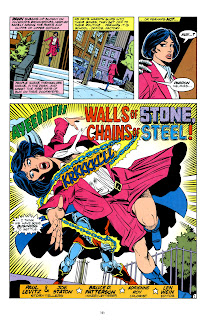 Summary: It's an ordinary day in Gotham and Helena Wayne is just getting ready for work. The moment she makes it out the door, she is attacked by someone she has seemingly met before and is knocked unconscious by a chain that produces electrical shocks. By the time she wakes up hours later, she finds herself bound to a wall with medieval manacles and her shirt ripped open. Her captor is none other than Edgar Stenville, a crime boss she has run into twice on two back-to-back cases.

Having deduced that the Huntress had to be Helena Wayne as evidenced by the fact that she kept coming to Arthur Cranston's rescue,  Edgar Stenville (now going by the name of Crime Lord) decides to enact his revenge on the young heroine. He begins by fondling her neck and chest with the tip of his sword, which further rips her shirt (all of which constitutes sexual assault). He then knocks Helena unconscious by applying electrical shocks to her body. By the time Helena wakes up, she finds herself lying on the floor with no recollection of what was done to her while she was passed out, but noticed Stenville had released her from the manacles and left her costume in the room with her to change into. Helena deduces that Stenville is on a male power trip and changes into her Huntress costume to take the fight to him.

Review: This is one of those stories that's worthy of discussion namely for its casual depiction of sexual assault in a comic that still targeted children as part of the demographic. While I don't think neither Paul Levitz nor Joe Staton were aiming for shock value when they constructed this story back in 1982, it does nonetheless make you question why they felt the need to have the Crime Lord assault the Huntress in a very sexualised manner. It's not only an irresponsible creative choice that disempowers the female superhero in a specifically gendered way to a very young and impressionable audience, but the fact that the sexual assault is never acknowledged at any point in this story arc is very problematic because it normalises sexual violence against women.

This is not a case of two people consenting to kinky sexual play. This is very much an explicit case of a male criminal dehumanising a female superhero by treating her body like an object. He's not enacting revenge by 'inflicting the same kind of terror she inflicted on him' (which was not sexual in nature), but a case of disempowering and humiliating her in a way that's specific to her gender, in this case, through the use of sexual violence. The worst part is not knowing what else he did to Helena both times that she was unconscious, and Helena at no point ever acknowledges her own sexual assault. Let's talk about that.

One thing that never happens during sexual assault is the affected individual brushing it off like nothing happened. Everyone who has ever experienced sexual assault knows that they were assaulted, and they do react to it. How a person reacts to their sexual assault does differ from person to person, but one feeling that is universally shared is that feeling of being violated. It's the troubling knowledge that someone actually touched you in a very intimate way without your consent. It's the discomforting knowledge that someone treated you like an object and acted upon you like an object, which often produces feelings of shock and eventually anger. It may not happen right away, but once the reality of the whole thing really sinks in, the way you feel about it is intense. (At least that's what I experienced when I was sexually assaulted as a teen).

Given that Helena in this story was knocked unconscious twice, was left in a vulnerable position, and even fondled with a phallic-looking object while bound with her chest exposed (plus she didn't know what else was done to her while she was passed out), she wouldn't just get up and ignore the fact that it happened. Nor would she quickly brush it off to go on detective mode as she normally would as the Huntress. No. She would instead react to the fact that she was violated. Even if she doesn't do it right away, she would still, at some point, acknowledge that the assault happened and would react to it. At best, she's visibly upset and uncomfortable at the time that the Crime Lord is assaulting her (when she's conscious), and she even acknowledges that the guy is a sick, sadistic bastard, but the aftermath of the assault itself is never actually dealt with.

This is definitely one of those stories that could've benefitted from having a female editor as part of the creative process because the depiction of Helena's capture was not every well thought out by the male creators, and even the imagery in the three pages that it happens in can be pretty triggering to someone who has survived sexual assault in real life. Considering that neither Levitz nor Staton were attempting to make a point about sexual violence with this story, they could've easily left out the sexualised nature of Helena's capture, and nothing about the overall story would've changed. She could've been easily captured by her villain in the same way her father was always captured by his villains, and it would've still been a standard story about a superhero vs a supervillain, just without the sexual violence.

Helena Wayne may have gotten an 'A' in her abnormal psychology class for this story, but I graduated with an actual psychology degree, complete with research experience. I do know for a fact that the creative choices made by both male creators came from a place of unchecked privilege, and a failure to examine the misogynistic context of having a male villain sexually assault a female superhero as part of his revenge story arc. They especially failed to take into account how casual depiction of sexual violence would be internalised by a young impressionable reader (including one who could become a future DC Comics writer, artist, or editor), and they especially didn't consider if any survivors of sexual violence (including children unfortunately) could pick up this story at their local drug store in 1982.

Beyond that very glaring problem with the casual depiction of sexual violence in this chapter, the rest of the story is pretty solid in terms of purpose. It is actually a defining chapter for the character of the Huntress as the events from this story does later affect how she approaches crime-fighting. Unfortunately, all of that will be discussed in the future instalments since this one chapter was three pages of Helena being sexually assaulted before actually taking the fight to the Crime Lord, the bulk of which happens in the next chapter.