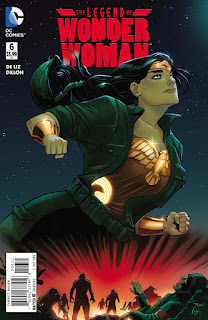 Summary: In Normandy, France, Princess Diana (now going by the name Diana Prince) volunteers as a nurse for the US military to gain information about the Duke of Deception. Accompanying Diana is Etta Candy of Holliday College who looks to dazzle US soldiers with her singing talent, while at the same time functioning as Diana's guide to the outside world. Death and destruction follow the Duke of Deception wherever he sets foot, effectively plaguing the shores of Normandy with armies of undead soldiers that cannot be defeated with mortal weapons.

Deciding to no longer stand by while brave soldiers pointlessly lose their lives in a battle that isn't even their own, Diana decides to bring the fight to the Duke of Deception himself. Using the combative arts she learnt from her mentor, Alcippe, and the enchanted gifts she obtained from her mother, Diana runs to the battle fronts to defend the Allied soldiers against the Duke's dark armies of death. She also confronts the Duke about his possession of the Baelytus, a jewel that was once worn by her mother, Queen Hippolyta. Diana, however, is not the only one who wants answers. Etta Candy--who up until this point has been a very patient host for Diana--wants answers of her own.

In finding out that her new friend possesses supernatural abilities, Etta demands that Diana tell her her origin story. Diana complies feeling that she does owe Etta an explanation, even if the likelihood of her believing her story is close to zero. Etta promises to believe anything she says without question. Diana tells her everything from the history of the Amazons to the rise of Queen Hippolyta, and even her own birth and upbringing on Themyscira. Etta has a hard time digesting most of this information, but takes it as a suitable explanation for her new friend's unusual abilities. Diana believes she needs to hide herself from the world to avoid endangering others, but Etta feels differently. She strongly feels Diana could be a stronger influential power operating in the open, especially with everyone talking about the 'wonder woman' who saved Allied forces hours earlier. She strongly feels that as 'Wonder Woman,' she could easily empower others and influence change, effectively becoming a champion of the world. She even designs a costume for Diana that she feels symbolises Wonder Woman's power, using the American flag that was given to her earlier on by the old woman. 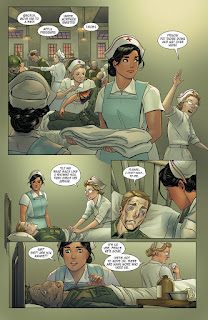 Review: Issue #6 of Legend of Wonder Woman is what I would describe as the most defining chapter of Renae De Liz and Ray Dillon's epic narrative. It is the chapter that all of the previous issues have been building up to, leading to Diana Prince's satisfying transformation into Wonder Woman, the moment we were all waiting for.

Words cannot describe how De Liz masterfully crafted the build-up to this moment, leading Diana to find her place in the larger world outside of Themyscira, and most importantly, how she wants to define her role in it. In accepting her place as Wonder Woman to the world at large, Diana tasked herself with expanding her role from being Themyscira's champion to being a champion to the entire world. That acceptance culminated in the teasing revelation of the Wonder Woman costume on the final page of this issue, which in itself leaves you feeling pretty excited for the next issue.

I really enjoyed that throughout this series, De Liz didn't take any shortcuts in storytelling to quickly get Diana into the role of Wonder Wonder. She took us all on a journey of self realisation that started with Diana trying to figure out how to get back home after escorting Steve Trevor back to his world, only to see with her own eyes how badly the outside world suffered. Not only was a major world war taking place in 1944, but she was especially affected by the suffering of innocent civilians who were caught in the crossfire of a war that was never about them. She was particularly affected by the sight of whole families being left homeless and children either being orphaned or left starving on the streets. That was a pretty devastating thing for her to see, which ultimately factored into Diana's decision to defy all the rules and actually fight at the front lines. She wanted to fight not for her own honour, but out of a strong desire to protect the innocent lives that were being destroyed daily by warfare.

These are very much the core concepts of Wonder Woman as a character that truly make her an icon. She not only celebrates femininity by existing within the context of a society in which sexism doesn't exist to create limitations for women, but it especially facilitated one of her most important and enduring traits: empathy. Hierarchies exist within Themysciran society--complete with different levels of power for each of its residents--but equality still exists. All life is valued and each of the roles that the various Amazonian women occupy is respected. By placing Diana in the middle of one of the worst conflicts in human history--World War II--we see this trait in Diana more clearly.

While De Liz doesn't get into the specifics of the conflicts taking place during this very disturbing episode of the 20th Century, World War II is nonetheless universally remembered for the brutal violence that was committed against various groups of people all over Europe, Asia, and the Pacific in particular. This was a period that was defined by extreme white supremacy that facilitated the rise of dangerous individuals such as Adolf Hitler, Francisco Franco, and Benito Mussolini. This was a period where the Japanese army formed an alliance with both Nazi Germany and Fascist Italy, and attempted to violently conquer Asia as well as the Pacific islands, effectively bringing the US into the war. This was a violent era defined by mass exterminations of people of various ethnicities, cultures, and other groups that were defined as 'abnormal' by these rising powers as a way of 'cleansing' the human race of 'impurities.' It was a violent era defined by ruthless dehumanisation in the form of unlawful imprisonment of innocent civilians, human experimentation, rape, and using human body parts to make furniture and other such brutalities. 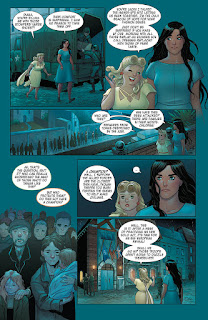 Given the reality that many people were living with during this time, it's easy to see why the appeal of superheroes was exceptionally high (both in the real world and in the fictional world that these Golden Age heroes resided in). De Liz effectively captures this same desire for a champion who will stand up against powerful bullies and fight on the behalf of innocent civilians through the perspectives of the Allied soldiers in this chapter, and later the civilians themselves in issue #7.

At the centre of Diana stepping into her new position as that champion is her empathy, coupled with the fact that she is a woman who comes from a place where all groups of people are loved, valued, and accepted. In this regard, Diana is more than just a champion of justice, she also represents the very marginalised people who are being directly harmed by the war. The fact that she is herself a member of various marginalised groups (she is a woman who is not Christian and also comes from a society that embraces queer identity and racial diversity) is how she gets her power as an icon. These very marginalised groups see themselves through her and effectively feel empowered by her--a theme that gets explored further in future issues of Legend of Wonder Woman.

In addition to all the contextual references that defined the superhero genre during the Golden Age era of comics, De Liz also continues to provide some fan service in the form of making references to other DC Comics characters that were very prominent during this time. In this issue, De Liz explicitly names the existence of the Justice Society in the world that she is building around Diana. While she doesn't name any of the founding members (not yet anyway), it's not hard to guess who those characters would be. In the 1940s, the Justice Society was largely comprised of Jay Garrick as the Flash, Alan Scott as the Green Lantern, Kent Nelson as Doctor Fate, Wesley Dodds as the Sandman, Rex Tyler as Hourman, Al Pratt as the Atom, and Carter Hall as Hawkman. While Batman and Superman occasionally teamed up with the Justice Society during this time, they were not full time members like their descendants (Huntress and Power Girl) would later become, but were honorary members. When Wonder Woman did fight alongside the Justice Society during the original Golden Age, she did so as a full time member of the team, and that is something that gets foreshadowed in this issue.

The last important thing that happens in this issue is the role that Etta Candy plays in Diana's self realisation as Wonder Woman. Throughout Diana's journey outside of Themyscira, Etta has been at her side to facilitate her transition to this unfamiliar setting. It was through Etta that Diana was able to cross the Atlantic in pursuit of the Duke of Deception. It was also through Etta that Diana acquired her last name of 'Prince' and got to volunteer as a nurse for the US military. (In the original Golden Age comics, Diana Prince was a real nurse who looked exactly like Diana, which facilitated the latter to assume her identity and pose as her). Now that Diana has publicly outed herself as the world's Wonder Woman, it was through encouragement from Etta that Diana fully embraced this new role and even acquired her Wonder Woman costume, which Etta put together for her.

This was a pretty significant story arc for both women that solidified their friendship. Without Etta, Diana would've struggled to blend into the outside world and she would've especially found it hard to achieve her goals as a fighter for justice in a world that structurally despises women. Similarly, without Diana, Etta would've never considered helping out in the war efforts, preferring the safe comfort of the American borders well away from the war.  Without Diana, Etta would've never found the courage to fight against powers that were far greater than herself. Etta by herself was already a force to reckon with, but with Diana, Etta realised for the first time the full extent of her potential, and that's a level of self awareness that is going to play out in the remaining three chapters.