The Best of the Huntress: Wonder Woman #308 Review 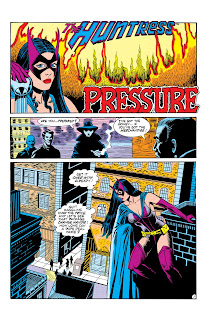 Summary: It has been a wild ride for the Huntress. From the moment she took on the cases of the Mechanic, Pat Pending, and the Undertaker, all of which led her to Arkham Asylum where she was shot with a potent cocktail of hallucinogens, Helena Wayne is more than happy to get back to her normal routine of being a lawyer by day and the Huntress by night. But are things really back to normal for the Huntress, or are things just getting started? As the downward spiral of Helena Wayne's life continues, she is met with a new set of friends and foes, one of which is the ambitious reporter, Nedra Borrower, who is out for the Huntress' blood!

Review: Last we left off before spending the last four months of 2017 celebrating Helena Wayne's 40th anniversary was the conclusion of the Arkham Asylum story arc. In the last chapter of this story, Helena Wayne was made to confront her worst fears after being shot with a very potent hallucinogenic. In this chapter, she seeks to get her life back on track, but it does not appear as though there is any going back to the way things were following those recent events. 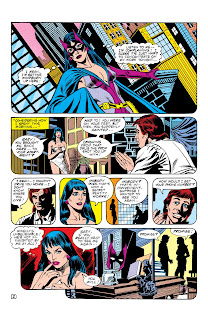 This is admittedly a very strange way to start a new chapter. Aside from the fact that Helena is not reacting appropriately to a situation most women would identify as a sure sign that sexual assault took place, it's also hard to know for certain where Joey Cavalieri is trying to go with the Gary Minelli character. On the one hand, he doesn't hide the fact that he is very much attracted to her despite her lifestyle, and is even turned on by it. This is a significant difference from Helena's romantic partner, Harry Sims, who very strongly rejects this aspect of Helena's life.

The fact that Cavalieri named this new character "Gary" to rhyme with "Harry" and like Harry also serves the law in some capacity (he is established as a detective here), you can start to see that he is clearly juxtaposing this new man in Helena's life with her romantic partner. The question is, is Cavalieri trying to give Helena a new love interest who actually respects her as a person? Well...that's the part that's not really clear because the same chapter also establishes that he is something of a black sheep in Gotham's police department, and not in a good way. The fact that Gary undressed a woman he is attracted to while she was unconscious also doesn't paint him in a positive light, and instead places him in the category of being a creep.

Another character that is introduced in this chapter as an antagonist for Helena Wayne is a female reporter named Nedra Borrower who was only previously mentioned in the earlier chapters. Now, Nedra as an antagonist is quite interesting because in contrast with all the previous antagonists Helena has faced since her comic debut, Nedra is the first who isn't a criminal in any capacity. Nedra is in fact a law abiding citizen who is also an ambitious career woman. So where does the "antagonist" part come in? Well, that's the part that's interesting: She hates the Huntress for pursuing her goals in life. Huh? What? Yeah. Let's talk about that.

When we first meet Nedra in this chapter, she looks like a Lois Lane-type reporter who has latched on to a big story that she feels will get her noticed, in this case, the debacle surrounding the Mechanic, the Undertaker, Pat Pending, and Arkham Asylum. So far, nothing's out of the ordinary...yet. When Nedra learns from the suspects the police took into custody that the Huntress was not responsible for any of the deaths she was originally blamed for, Nedra was immediately disappointed and no longer felt like she had a story. It turns out the criminal ring that was responsible for the events of Arkham Asylum and the deaths of the aforementioned individuals was not the story she wanted to cover. Instead, she wanted to cover the Huntress' involvement in those deaths. So why is Nedra obsessed with painting the Huntress as a murderer? 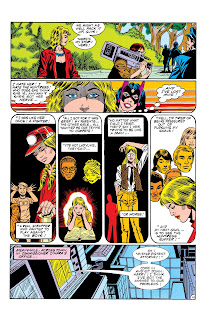 From the backstory we are provided with from Joey Cavalieri, Nedra started out with ambitious goals as a child, but was frequently discouraged from pursuing them due to her gender. She had a strong desire to compete in male dominated spaces, but was frequently told her pursuits were not "lady-like" and even made people assume she was a lesbian. Feeling trapped, limited, and isolated in a bubble intoxicated with internalised misogyny and homophobia, the Huntress represents to Nedra the person she wants to be: free. But that is also the problem Nedra has with the Huntress.

Given Nedra's reasoning for hating the Huntress, her problem is less about the Huntress actually existing and more about the fact that another woman who isn't herself got to do exactly what she wanted to do. I guess you could say the Huntress is something of a black mirror to Nedra that presents to her the person she sees herself as on the inside, but the face she sees on the outside is that of someone else. Being met with that reality hurts her.

The existence of the Huntress makes Nedra feel as though she has failed herself in a very big way. Nedra has surrendered to her own insecurities, internalised misogyny, and homophobia by doing exactly what other people wanted her to do. She became the person other people wanted her to be and she doesn't feel like she is living an authentic life. The Huntress by contrast symbolises for Nedra the woman who didn't bend to the will of other people and got to pursue the goals she wanted to pursue in life against all odds. She got to be her authentic self. So Nedra thinks.

Truth be told, Nedra does not know the woman who is the Huntress, let alone the reasons that drove that woman to become the Huntress. She doesn't know Helena Wayne's insecurities and other internal struggles, nor does she really care because none of that is relevant to her. She sees the Huntress as the hero the rest of the world sees. So while Nedra has set out to "destroy the hero" and the public's perception of her as her "new goal," in reality, she wants to the destroy the metaphorical black mirror that represents her own failures as a person, not Helena Wayne. The Huntress just happens to be the entity she is projecting all of her anger towards. 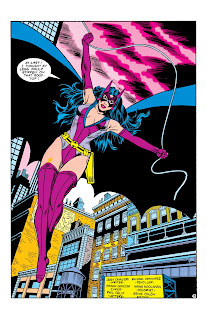 With self-loathing driving Nedra Borrower to destroy another woman she doesn't know, this brings us to the last topic of conversation for this chapter: is she succeeding?

One recurring theme that's been prominent since the start of Joey Cavalieri's run that is present here is growing public distrust in the Huntress, leading to public pressure on Gotham's authorities to put an end to her activities. This is probably starting to sound like the plot of the 1986 maxiseries Watchmen by Alan Moore and Dave Gibbons. While Cavalieri's story does explore this same theme, he doesn't do it for the same reason Moore and Gibbons do in their own story.

Within the context of Watchmen (written three years after this Huntress story was published), trust in superheroes was present from the moment the first costumed vigilante appeared in that universe as "Hooded Justice" in 1938. Since one of the themes of Watchmen was to explore the natural consequences of costumed vigilantes existing in the real world, public distrust in superheroes culminating in their public banning in 1977 was handled as a natural consequence of that decades-old distrust.

Within the context of Joey Cavalieri's Huntress story, growing distrust in the Huntress is being explored as a consequence of mass media, specifically the power that media has in shaping public opinion and ultimately human behaviour. This is something that gets explored more in-depth in a future chapter, but it does nonetheless show that Nedra has been manipulating public perception of the Huntress since the beginning of Cavalieri's run. We're just now seeing a face being put to the name.