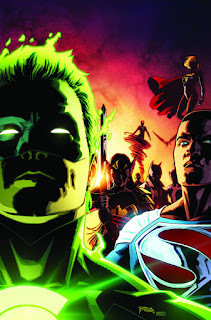 Originally, we were supposed to get an Earth-2: Rebirth series as part of the Rebirth relaunch this year, and this was officially announced on DC's website months before the WonderCon press conference and full Rebirth solicitations. When we got more details about the relaunch at the aforementioned convention, we all noticed that Earth-2: Rebirth was not among the solicited titles despite being in the initial line-up, and no explanation was given by Geoff Johns, Dan DiDio, and Jim Lee as to why that was. Geoff Johns later confirmed that 'the Justice Society was still out there,' and that 'Earth-2 was not a Rebirth property' and would 'continue the current series.'

What's more is that Geoff Johns' DC Universe: Rebirth #1 did actually confirm that the more classic Justice Society does exist, and we know it's the classic Justice Society because Johnny Thunder is pushing 100, and remembers when McCarthy tried to get the team to reveal their identities in 1951. This is not consistent with the current Earth-2 continuity, but it is very consistent with both the pre-Crisis Earth-2 and post-Crisis continuities. That same one-shot also confirmed the existence of Kent Nelson as Doctor Fate on Prime Earth and the remaining Justice Society members, though they have 'disappeared somewhere' and no one except Johnny seems to remember them. Lastly, Geoff's one-shot established that the New 52 continuity is the same as the post-Crisis continuity but with an altered history as a consequence of Doctor Manhattan's time manipulation.

There's a lot to digest there because on the one hand, Convergence undid Crisis on Infinite Earths, which means that logically, the post-Crisis universe shouldn't still exist because that aftermath no longer happened. Realistically-speaking, the current New 52 continuity should actually be back to its Earth-1 status, even if it does keep post-Crisis additions like Tim Drake, Stephanie Brown, and Helena Bertinelli as the Huntress. We know that Convergence is a canonical story because that story is the reason we have the post-Crisis Superman back in continuity. His storyline in that event facilitated his migration to the New 52 universe and actively replaced his New 52 counterpart.

Another thing that's worth considering is that despite Kent Nelson being confirmed as existing on Prime Earth, it was never actually confirmed if he originates on Prime Earth. Historically, Kent Nelson is from Earth-2 and when Crisis on Infinite Earths destroyed the multiverse, his history got folded on to the post-Crisis Earth, which was an amalgamation of various DC Earths, including Earth-2. There was never a Prime Earth Kent Nelson because the one that appeared on Prime Earth post-Crisis was the same one as the Earth-2 Kent. If Crisis on Infinite Earths no longer happened because of Convergence, and if the only person who still has memory of the Crisis is the original Wally West from Earth-1 (who later became the post-Crisis Flash), it's very possible that the pre-Crisis Earth-2 is back in continuity and the Prime Earth Kent Nelson is in fact the pre-Crisis Earth-2 version. Like the post-Crisis Superman and pre-Crisis Wally West, he could in fact be stranded on Prime Earth or he may have actually travelled there, which is also possible given that he has magic-based powers.

While there is plenty of evidence to suggest that the Justice Society characters in Geoff Johns' one-shot may be existing on Prime Earth, we also shouldn't forget that all of the Flashes are capable of travelling to parellel Earths through the speed force. That is how Barry Allen discovered the existence of the pre-Crisis Earth-2 in 1961, and that is how both Jay Garrick and Wally West discovered the existence of a duplicate Earth-2 in Geoff Johns' Justice Society of America run. We therefore cannot rule out the possibility that Rebirth's Wally West may have actually visited Johnny Thunder from pre-Crisis Earth-2. Given that we don't know any details about Doctor Manhattan's involvement in the stealing of time, or how this ties into the status quo that was established by Convergence, DC still has plenty of time to sort all of this out, and figure out how all of these pieces fit together. It is possible that Earth-2: Society may start paving the road for the reinstating of the more classic Justice Society, we just don't know how that's going to happen, or if that's going to happen.

Here's what we do know: Convergence undid Crisis on Infinite Earths and reinstated the original multiverse. That same miniseries also established that these worlds 'evolved' into their current forms. That miniseries established that the pre-Crisis Earth-1 and post-Crisis Earth-0 are the same Earth as the New 52 Prime Earth, and that the pre-Crisis Earth-2 is the same as the New 52 Earth-2. If Watchmen's Doctor Manhattan has been manipulating everyone's timelines this whole time instead of Pandora (as Geoff Johns' Rebirth established), has been moving characters from different DC continuities around like chess pieces (there are three Jokers, for example, one of which is the pre-Crisis Earth-2 Joker), and on top of that, has been erasing everyone's memories, we can't rule out the possibility that the current Earth-2 Justice Society characters like Alan Scott and Jay Garrick may in fact be the missing Justice Society heroes the older Johnny Thunder remembers, but with altered memories. We also can't rule out the possibility of the New 52 Power Girl being the same as the pre-Crisis Earth-2 Power Girl, but with altered memories. The same may also be true of New 52 Helena Wayne who's pre-Crisis death has now been undone by Convergence, effectively allowing her to exist again, but with altered memories. It would certainly be consistent with the theme Geoff Johns established in his Rebirth one-shot.

Whether or not these characters get reunited with many more missing JSAers and end up on an Earth-2 that actually resembles the pre-Crisis original, or if the solicitation for Earth-2: Society #17 is setting them up to be a part of the Prime Earth Justice Society for Rebirth, only time will tell. Right now, with no plans for the Justice Society characters laid out by DC at this time, and with a very messy continuity DC themselves are still trying to make sense of, anything is fair game at this point. The destruction of the current Earth-2 coupled with the characters ending up in a limbo dimension does certainly hint at the possibility of DC looking to transfer these characters over to Prime Earth for a Rebirth of the Justice Society. After all, the solicitation does mention that only a 'handful' of them end up in this limbo dimension, and it is possible they may find more missing JSAers in this limbo like Rex Tyler as Hourman, the original Dinah Drake as Black Canary, and Charles McNider as Dr. Mid-Nite (the other three that were shown in the hourglass in the Rebirth preview). We may get a new Earth-2 title following Earth-2: Society's conclusion, or DC may just settle for launching a Justice Society title instead with these characters back on Prime Earth.