The Best of the Huntress: Wonder Woman #290 Review 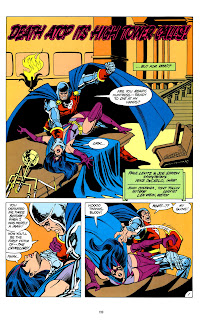 Summary: Following his capture of the Huntress, the Crime Lord provides further details of his plan. The first is the most obvious: he plans to kill her. However, he also knows who the Huntress' allies are and knows what she is capable of doing. Rather than risk losing to her in a fight to the death, the Crime Lord secures his 'final victory' against the Huntress by using Alfred Beagle's life as his insurance against his own death, effectively making the fight personal to the heroine.

With Alfred's life on the line, the Crime Lord offers Helena Wayne an ultimatum: if she dies in the fight, Alfred will live. If the Huntress succeeds in killing the Crime Lord, then Alfred will die. This ultimatum succeeds in shaking Helena, but it doesn't stop her from putting up a fight. Though battered, bruised, and injured, Helena gives it her all until gravity works in her favour, and the Crime Lord falls to his death when he attempts to deliver the final blow. Though her own life is spared, Helena still has to race against the clock to save one more life in another town: in this case, the life of her family's butler. The thought of that alone terrifies the heroine.

While Helena concerns herself with defeating the Crime Lord and preventing the death of a family member, her partners at Cranston, Grayson, and Wayne grow worried about her absence, though not for the reasons we would think they'd be concerned. Also inside the offices of Cranston, Grayson, and Wayne is Charlie Bullock who pulls up the firm's file on the Huntress, implying he may know that a connection between the heroine and his colleague, Helena Wayne, exists. 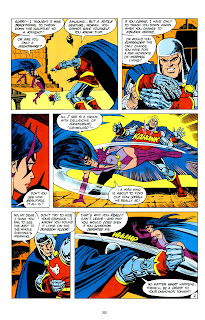 Review: This is a very defining story arc for the Huntress, precisely because of the very personal nature of it. This is the first time that a villain discovers her true identity and uses the life of someone she is close to as collateral. It is also the first time that Helena realises how often she underestimates the danger threshold of the criminals she encounters, especially in this case since she never bothered to assess what a crime lord like Edgar Stenville was capable of doing. A man who appeared to be nothing more than a petty, cowardly criminal turned out to be the most calculating, most dangerous villain Helena has encountered thus far.

While the bulk of this chapter is Stenville and Helena fighting to the death, the fight itself and subsequent denouement are the least interesting aspects of the story. What is interesting is how the element of surprise was used against Helena and how Stenville in particular orchestrated the deadly match in a very calculating way that shook Helena. Before, Helena never had to consider the possibility of a villain ever getting the upper hand on her because she learnt so much of her villains' profiles from her own parents. In the case of Bruce Wayne, he either fought them alone as Batman (as in the case with the Joker), or he encountered them with the Justice Society (as in the case with the Thinker and Solomon Grundy). In the case of Selina Kyle, they worked for her as Catwoman (as in the case with Lionmane and Silky Cernak).

As it was, Helena was very confident she could take on any of Earth-2's villains because most of the high profile ones already had an established history, and even got to work alongside heroes (like the Justice Society) who already had experience fighting them. As such, Helena could easily defeat them by studying their MOs and using this knowledge to her advantage. Prior to Stenville, she has never had a villain that she didn't already know how to defeat, which made Stenville her first genuine villain, which posed a very different challenge to Helena.

Helena's challenge in this story is two-fold. Contrary to what she was used to, Helena found herself not knowing right away how to defeat a villain like Stenville and she didn't have time to figure him out either because another person's life was in the balance. She was also burdened with needing to keep herself alive and figuring out a way to defeat Stenville without compromising the life of an innocent man. There was no easy way out of this conundrum, which understandably left Helena emotionally compromised. She didn't know what to do, she only did what she could do in this situation, which was kill or be killed.

Helena knew that even if she allowed Stenville to kill her in order to spare Alfred's life, there was no guarantee that he would actually keep his word, potentially resulting in two deaths instead of one. While Helena would've preferred throwing Stenville's ass in jail, she also knew that doing so wasn't realistically feasible as he had instructed his henchmen to kill Alfred by midnight if they didn't hear from him. This meant that even if Helena had succeeded in disabling Stenville somehow and getting him to a police station, by the time she had finished doing that, it may have already been too late to save Alfred, which is not a death she could live with. This really left Helena with only one option, which was to kill Stenville and haul ass as quickly as possible to the town Alfred was being kept in to try to save him. 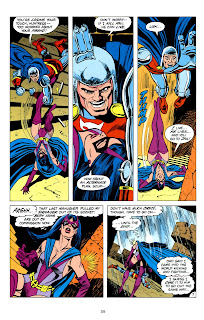 In many ways, this story arc addresses the question of whether or not heroes should kill and whether or not there are story situations that justify it. Although the Comics Code of Authority prohibited any depiction of heroes murdering their foes at the time of this story's publication, resulting in authors needing to 'find a way around it,' it is nonetheless a legitimate question. Had this same story been published today, the outcome of the fight between Stenville and Helena may have played out differently and I don't think it would've been out of character for Helena to make an exception in this case.

As previously addressed, Helena was emotionally compromised with the knowledge that if Stenville had his way, a family member of hers would die. With that emotional compromise, it also meant that Helena would not have been able to think anything through as she normally would in most situations because she was completely unprepared for an ultimatum of this magnitude. She never counted on something like this ever happening to her at all. Given all the complex emotions she was experiencing, she could only react in this situation, even if the decision she ultimately made wasn't the right one or the one she would've preferred. At best, she did consider allowing Stenville to kill her, but even she was incapable of doing that she since she equally values her own life.

Though Helena was able to get out of this fight alive and without having to kill her opponent through dumb luck,  the question of whether or not Helena is willing to cross the line to save the life of someone close to her is still not over as the next instalment of this story arc will show.