The Best of the Huntress: Wonder Woman #321 Review 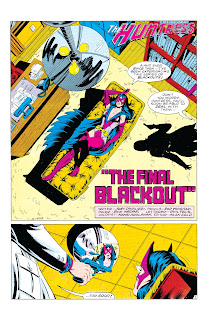 Summary: Helena Wayne has decided to seek psychiatric help as the Huntress for the recurring nightmares she's been having about her mother. She thinks the nightmares may be linked to some cat burglaries that have been happening in Gotham recently. Most disturbing to Helena yet is the fact that she blacks out during these robberies, which makes her question whether or not she's the one committing them. Before she has the chance to unpack to psychiatrist, Dr. June Moorman, the doctor herself tries to kill the Huntress, which alarms the heroine. Exactly who is June Moorman, and what history does she have with the Huntress that makes her want to murder her?

Review: Not going to lie, this was a difficult review to write. Not just because it's Helena Wayne's last solo story before Crisis on Infinite Earths rebooted the DC Universe between 1985 and 1986, but also because the story itself comes to a close without a proper conclusion. As such, it is left open-ended and ends on very a weird note. The reason for that was because prior to the Crisis reboot, a Huntress miniseries was in the works by DC Comics due to Helena Wayne's growing popularity with fans. Originally, the Huntress solo book was going to pick up from where this story left off and test the waters to see if the character could hold her own monthly series. 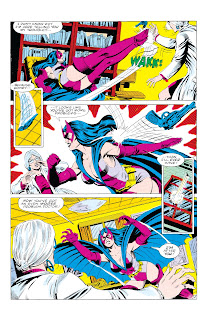 Crisis on Infinite Earths was a controversial reboot for a multitude of reasons. The biggest of which was that it attempted to merge—unsuccessfully—an entire DC Multiverse with conflicting core mythologies and histories into a single Earth continuity. In doing so, DC was met with the challenge of needing to reboot many of these Multiverse characters in order to make them functional on their new mainstream DC Earth. This was a controversial decision in and of itself. One of the characters who was profoundly affected by these changes was the Huntress, who was changed from her original incarnation as Helena Wayne to Helena Bertinelli by Joey Cavalieri so that she wouldn't conflict with DC's plans for Batman who was originally her father.

Discussing the ups and downs of the Crisis reboot and the damaging longterm repercussions it had on the Huntress (whether you're Team Wayne or Team Bertinelli) is a topic that deserves its own post or two. For the purpose of this review,  I'll do my best to discuss what this story does wrap up, which isn't much considering the very weird way that it ends.

One of the things writer Joey Cavalieri does at the start of this story is revisit a plot thread from the Arkham Asylum story arc a year earlier. Normally, I don't think it's a problem to revisit subplots that didn't see a proper conclusion in the original stories they appeared in. In this story, however, it feels a little out of place.

While we did see Dr. June Moorman as the nurse—Lucinda Morrison—in the Arkham Asylum story, she was also not a major character in that story. Her very brief appearance did not influence any of the major events that affected Helena's character and was very much an insignificant bystander. She didn't have much—if any—in the way of any actual agency. In this story, we learn a little bit more about her, but not enough to inform the reader on why she was deathly scared of the Huntress to the point of wanting to kill her.

From the information provided, Lucinda/June wasn't directly involved in any of Dr. Tarr and Professor Fether's criminal activities because they drugged her every day that she worked at the asylum to keep her complicit. More than anything, she was an innocent employee caught in the throes of a very unfortunate situation. While it's reasonable for her to fear the Huntress tracking her down in association with Tarr and Fether's illegal experiments, it also doesn't really explain why she was eager to kill the Huntress in a way that suggested she may have been equally guilty for what went down at the asylum. 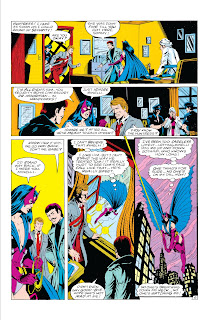 The weirdest thing about this story's conclusion, however, isn't even the June Moorman/Lucinda Morrison character arc. Instead, what I found most bizarre was the way Joey Cavalieri chose to wrap up the Gary Minelli subplot.

Throughout the last few story arcs, Gary Minelli had been a recurring character who first appeared as an inmate in the Arkham Asylum story arc. He turned out to be an undercover police officer who was later reassigned by Commissioner O'Hara to investigate the Huntress for possible criminal activity. An assignment he happily accepted and spent most of the last few issues stalking the heroine.

Since Day 01, Minelli made it known to the Huntress that he is openly attracted to her in a romantic manner, though she does not appear to reciprocate those feelings. In this issue, he openly admits that he's been stalking her, and feels she should be happy about that because he's her 'air-tight alibi' that she is innocent of all the cat burglaries in Gotham. He is puzzled when she isn't.

Helena is naturally disturbed by the fact Minelli had been stalking her, but is at the same time not too concerned about that, which is odd to me. Even odder was Helena being more offended at Minelli wanting to start a proverbial cockfight with Tom Kelly, whom he immediately identified as a romantic rival. I'm honestly not sure what to make of Joey Cavalieri's logic here when he wrote these pages, but I guess this was his way of confirming that Helena sees Gary as an ally (despite his creepy behaviour), but is perhaps more romantically interested in Tom Kelly, who at least respects her.

With the two characters, it seems Joey Cavalieri wanted to give Helena Wayne better choices for romantic partners that wasn't her problematic boyfriend, Harry Sims. The thing is that he executed this in a very strange way. Between the two, I have to agree with Helena's implied interest in Tom Kelly because he at least respects her boundaries and respects her as a person. Gary Minelli strongly admires the Huntress, but doesn't seem to have a concept of boundaries and is way too forward in his sexual advances, which would put off any woman. 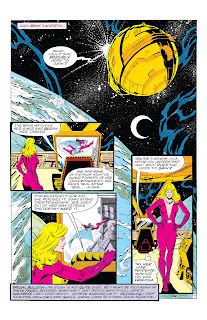 Unfortunately, we don't know what would have come out of Helena's weird romantic entanglement due to the Crisis reboot (which is teased on the last page of this story), but I prefer to assume she eventually took up Tom Kelly's offer to listen to his Motown records in his flat.

While this is Helena Wayne's last solo story as the Huntress for the pre-Crisis era, it is certainly not the last story we'll be covering with her. There is still her Solomon Grundy story that I never reviewed from the Paul Levitz era that I'll save for Halloween. There is also still her Justice League appearances to cover, and I still have to pick up on her Infinity Inc appearances.

Of course, there is still the video blog that Mark and I are working on together that we are hoping to pick up again in either September or October depending on how quickly we can replace one last piece of equipment, which is what's currently holding that up. Other than that, we managed to resolve all the other issues that we were having with recording back in December of last year.

Hopefully the next time you hear our voices, we don't still sound like Cybermen. :)