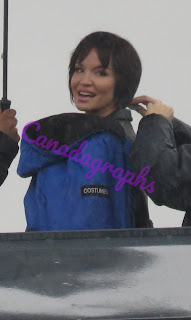 Since the official announcement Ashley Scott will be reprising her Birds of Prey role as the Huntress for the upcoming CW DCTV crossover Crisis on Infinite Earths, it has been an exciting couple of weeks for me as a Helena Wayne Huntress fan. Not just because Ashley Scott was my first exposure to the Huntress at all, but because she's also been revealing in the past couple of weeks how much this role has meant to her.

This week, Scott began shooting her first scenes for The Flash S06E09 and revealed in an Instagram post the emotional experience she had slipping back into the Huntress costume for the first time in 16 years:

Just to add a little more WONDER-full to the mix... Look what I was doing exactly 3 years ago to the day... Hiking under The Huntress moon. Today, was an extremely emotional day. I Slide my hands into her leather coat, Laced up her corset, adorned in her jewelry, I looked into Helena’s eyes again after almost 20 years. She is bold, she is wise and she is fierce... I feel swells of energy, knowing the fans that so loved our show will get to see her again. It is absolutely one of the greatest pleasures in my life to have been gifted with playing her the first time and now that has deepened beyond my own understanding. Here’s to you Huntress and to the devout fans that have kept you alive and well. Prrrrrrrfect 🦇 #birdsofprey #thehuntress #crisisoninfiniteearths #dccomics #dcuniverse –– @ashleyscott


In addition to Scott's Instagram post, Canadagraphs also managed to capture a few photos of Scott and her stunt double on set completely suited up as the Huntress in North Burnaby. You can check out their complete photo gallery of the Huntress in the link below, complete with possible spoilers for The Flash episode 09. Don't click the link below if you do not wish to be spoiled!

CANADAGRAPHS | Crisis on Infinite Earths - The Flash - First Look at the Huntress! 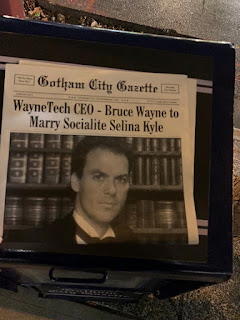 While that is definitely Helena Kyle as we remember her on the set of The Flash, we also learned in another Crisis teaser a few weeks back that Michael Keaton's Batman married Michelle Pfeiffer's Catwoman in the Batman 1989 universe we fondly refer to as Burtonverse.

Could Ashley Scott end up pulling double duty and portray both her original Birds of Prey character and possibly a more iconic version of the Helena Wayne Huntress for Burtonverse? Speaking for myself, a meeting between Birds of Prey's Helena Kyle and a more iconic Helena Wayne Huntress would make me fly over the moon in excitement! (Just don't drop a wall on her, Marv Wolfman!)

Apart from Crisis on Infinite Earths, I've also been rewatching the 2002 Birds of Prey series these past couple of weeks and have been writing reviews for each of the episodes, which will go online first week of November. Look forward to that!
Posted by Diane Darcy at 00:00