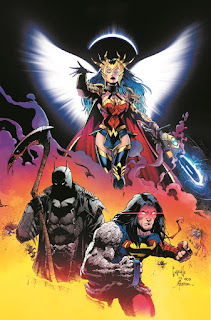 This week, DC revealed their upcoming event Dark Nights: Death Metal and their plans for DC Generation—a series of one-shots that will officially start the new DC timeline.

For Dark Nights: Death Metal, the DC Universe will find itself consumed by Dark Multiverse energy as a consequence of the events of both Scott Snyder's Justice League and the Year of the Villain: Hell Arisen miniseries. At some point in the story, Wonder Woman will come across an important piece of information, and will recruit DC's remaining heroes to put up a fight against Perpetua and the Batman Who Laughs.

Exactly how Dark Nights: Death Metal will tie into the future of the DC Multiverse and the upcoming Earth-5G timeline is unknown, but the creative team of Scott Snyder and Greg Capullo promise the Dark Nights: Metal sequel will be 'fun, bombastic, and over-the-top' just as comics should be. Speaking for myself personally, I hope the event picks up right where Justice League #39 left off as it ended on a massive cliffhanger. The first issue of Dark Nights: Death Metal will go on sale 13 May 2020.

Also on sale this May is the very recently announced Generation One: Age of Mysteries, the first of a series of DC Generation one-shots that will be told from the perspectives of Wonder Woman, Lucius Fox, Alfred Pennyworth, Green Lantern (Alan Scott), The Spectre (Jim Corrigan), and Mister Terrific (Terry Sloane). Each of the one shots is going to detail DC's 80 year history as well as setup DC's future storylines.

Without revealing too much, DC co-publisher Dan DiDio promises everything will count and that there will be surprises along the way. The series of one shots will explore the following storylines: