Catwoman 80th Anniversary Special #1: 'Helena' Is Not The Love Letter To Helena Wayne Tom King Thinks It Is 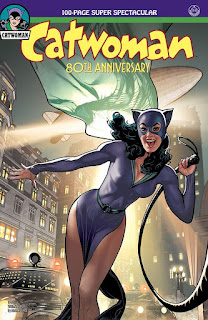 Catwoman 80th Anniversary Special #1 dropped this week, and well...I found it a bit underwhelming compared to the other anniversary comics that came out this year. Namely, the #750 anniversary issues for Wonder Woman and The Flash that were genuinely great, and Robin 80th Anniversary Special #1, which was also a favourite. For the 80-year-old feline fatale, however...I lamentably only liked four stories out of the ten that were featured: 'Skin the Cat', 'The Catwoman of Earth', 'Addicted to Trouble', and 'The Art of Picking a Lock.' Out of the four, 'The Catwoman of Earth' was the closest I got to getting a pre-Crisis Catwoman story.
As much as I would love to talk about the four stories I did enjoy from the Catwoman anniversary special (and I'll probably do it as a Patreon exclusive), I'll instead be focusing this post on the Tom King and Mikel Janín 'Helena' story. I will not be reviewing the story itself since my thoughts on Tom King's take on Batman and Catwoman is already pretty well known. But I will focus on King's interpretation of Helena Wayne's origin.
Before I autopsy Tom King's understanding of Helena Wayne as a character and the place that she holds in Batman and Catwoman's legacy, we need to first revisit her original Earth-2 origin in DC Super-Stars #17 from 1977 (which got a facsimile release last month), and her updated origin story in Secret Origins #7 from 2014. Specifically, we need to revisit the main themes that were explored in those original stories (both written by Huntress co-creator Paul Levitz) in order to understand the narrative Helena Wayne is meant to embody. It'll be especially important for discussing how well Tom King understands that narrative before discussing his sharp U-turns.
In case this needs saying, spoilers ahead for DC Super-Stars #17, Secret Origins #7, and Catwoman 80th Anniversary Special #1! (Also Brave and the Bold #197.)
1. DC Super-Stars #17 (1977) 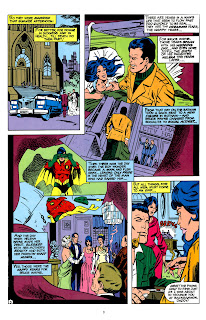 When diving into the pages of DC Super-Stars #17, in the story called 'The Secret Origin of the Huntress', readers are immediately met with an image of Bruce Wayne and Selina Kyle standing at an altar getting married. Writer Paul Levitz then informs readers that the story takes place on the parallel world of Earth-2, the world where DC's Golden Age heroes and stories resided.
In the first few pages, Levitz follows up on the lives of the Golden Age Batman and Catwoman following their last canonical adventure in 1954. We learn that sometime during this timeframe, Selina decided she wanted a fresh start in life and began her next journey by paying her debt to society. Once she was cleared of all her crimes as Catwoman, she resumed her romantic relationship with Bruce, and married him shortly after in the summer of 1955.
In the decades that followed, Bruce and Selina enjoyed a happy life together as a married couple, and even raised a daughter named Helena, who was born to them in 1957. Despite having moved on from their lifestyles as Batman and Catwoman, Bruce and Selina's enemies did not forget who they were. As such, their histories eventually caught up with them, resulting in Selina's death in 1976. With her mother now no longer a part of her life, a 19-year-old Helena Wayne pursued justice for her mother by capturing her killer in her first case as the Huntress. This life-changing event then catapulted Helena into a vigilante lifestyle mirroring that of her father.
So, what is the significance of this story and of Helena Wayne in particular?
To start with, DC Super-Stars #17 depicts a world where the original versions of Batman and Catwoman from the 1940s aged in real time. This concept of ageing superheroes became staple to Earth-2 canon, and helped set it apart from Earth-1 where the more modern versions of DC heroes and stories resided. The premise of Earth-2 allowed storytellers to more meaningfully explore how Batman and Catwoman would age, and where they could realistically end up as time progressed. This idea was explored more in-depth in the 1983 issue Brave and the Bold #197, where we learned that Selina Kyle by the age of 30 had wanted to move on from her life as Catwoman, just like she originally did in Batman #62 in 1950.
The Brave and the Bold story revisited the reason Selina chose to reform and why she lied about being a flight attendant who suffered from amnesia. It turned out she realised by the age of 30 she wasn't getting any younger, and that she eventually wanted to marry and have children. She also knew she couldn't realistically pursue that new life as long as her legacy as Catwoman followed her wherever she went. As such, she had to find a way out of the very trap she setup for herself when she became Catwoman.
In that same story, Bruce also disclosed the reason he no longer wanted to keep crusading as Batman. His costumed lifestyle was alienating him from the most important people in his life, and causing him to lose significant relationships. He lost his original fiancée, Julie Madison, and another girlfriend named Linda Page because he couldn't tell them he was Batman. He was also coming to terms with the fact that Alfred—his confidante—wasn't going to live forever, and that his ward, Dick Grayson, was growing up and would eventually leave the nest. Once those two remaining relationships were gone, Bruce would end up entirely alone, which was not the future he wanted for himself.
Within the context of DC Super-Stars #17, Bruce and Selina's story became a story about ageing and transformation after becoming aware of how their costumed lifestyles was impacting their quality of life. Rather than allow themselves to get to a place where they would end up alone and forgotten by the world around them, they chose to turn their lives around for the better, by pursuing something else they both wanted: a family. As such, Helena Wayne embodies the positive change Bruce and Selina made to their own lives as strongly evidenced by the fact they gave Helena a normal upbringing.
While Helena (as an adult) still made the decision to follow in her father's footsteps and continue his work in Gotham as the Huntress, it was still her autonomous decision. Bruce and Selina at no point decided she should learn to be a crimefighter, nor did they treat Helena as an extension of themselves. Instead, they gave Helena the best education Wayne money could buy and ensured that their daughter could lead a healthy, high quality life away from the dangers of a costumed lifestyle. Whom she chose to become as an adult was entirely up to her, but luckily she chose to honour her parents' legacy on her own terms.
2. Secret Origins #7 (2014) 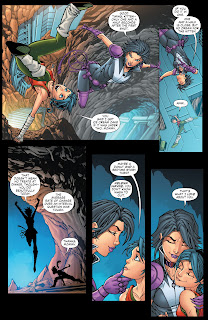 During DC's revamping of their main line with the New 52 in 2011, many characters—including Helena Wayne—got revised origins. In the new timeline, Helena Wayne got her start as her parents' Robin on Earth-2 before she later adopted her more iconic identity of the Huntress when she got stranded on the main DC Earth alongside her best friend, Power Girl.
Between the New 52 Earth-2 and Worlds' Finest series, we got bits and pieces of Helena's past on Earth-2 and the kind of relationship she had with her parents. In the new continuity, the Earth-2 Bruce and Selina still married, but they married much younger and continued living their superhero lifestyles as Batman and Catwoman. Selina still started out as a jewel thief, but later adopted a more heroic lifestyle sometime before or after she married Bruce. By the time Helena was born, both of her parents raised her from a very young age to become a crimefighter like themselves.
While Helena and her father were not particularly close apart from working together as Batman and Robin, we did learn in Worlds' Finest #0 that she was very close to her mother, who actually encouraged her superhero lifestyle. It wasn't until Secret Origins #7, however, that we were given more details about the kind of mother-daughter relationship they actually had.
In the story 'The Huntress: Two Names, Two Worlds', we learned that Selina was Helena's primary caretaker and mentor who taught her most of her skillsets. It was Selina who taught Helena how to dodge bullets in under two minutes, and it was Selina who read to Helena when she was little. It was also Selina who helped Helena decide on a superhero identity and costume, and was the first to supervise her first outings as Robin. After Helena tragically lost her parents to war, her mother continued to be a positive influence in her life as evidenced by her decision to become the Huntress and model her costume directly after her mother's. She even made it her mission statement to continue her mother's work, even if she had to do it on another Earth in the DC multiverse.
While this story makes significant changes to Helena's upbringing, the core concept of her character embodying positive change in Bruce and Selina's lives is still present. Just like their pre-Crisis Earth-2 predecessors, the New 52 Earth-2 versions of Bruce and Selina still made the decision to marry and have Helena as their child. While they didn't give Helena a normal upbringing like before, their decision to raise her to become a superhero like themselves still came from a place of love.
Even after Helena Wayne grew up and tragically lost her parents to war, the love she felt for both of them continued to play an important role in her career as the Huntress. Just like her pre-Crisis predecessor, upholding her parents' legacy and memory in an honourable way continued to be an important goal for the New 52 version of Helena Wayne. Not only did she model her Huntress costume directly after her mother's, but she continued to use her skills for the benefit of others just as she was taught. She even continued to be in control of her own life, even when she was met with the hardship of being stuck on a parallel Earth where she didn't actually exist.
3. Catwoman 80th Anniversary Special #1 (2020) 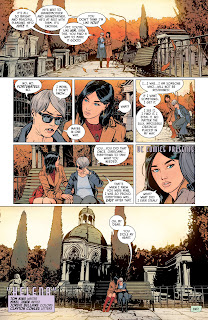 
Did you enjoy reading this article? Consider supporting me on Patreon where you can get early access to upcoming posts and exclusive content that won't be posted anywhere else!