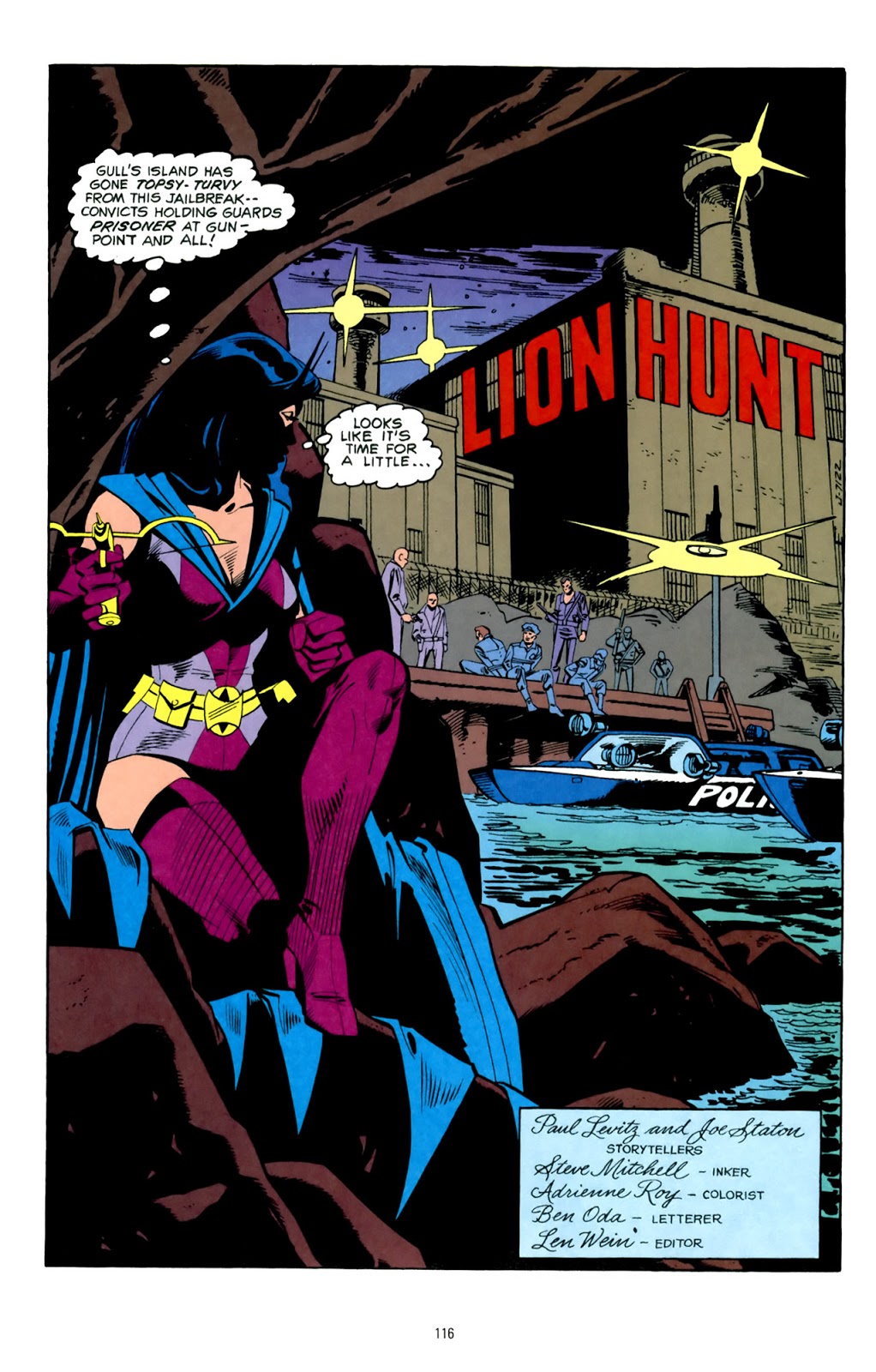 Summary: The story arc begins with the Huntress paying a visit to Gull's Island Prison where her boyfriend, Harry Sims, decided to spend the night in order to ponder his relationship with her alter ego, Helena Wayne. Inside the prison walls, Harry thinks about whether or not he's in love with Helena despite knowing her secret, but is then confronted by Huntress who wants to talk about their relationship. Harry says that he needs time to think things through and whether or not he's ready to accept the fact that she leads a double life. Huntress agrees to give him the time he needs, and though he agrees to keep her secret safe, she's not certain that'll be enough given the circumstances.

An explosion takes place inside the prison's walls just as Huntress is leaving, which causes her to pass out. It turns out that her mother's former henchman, Lionmane, is attempting a prison break and has managed to capture the prison's warden as their hostage. During the commotion, Harry goes to check up on Helena who is still passed out outside. He attempts to wake her but her reflexes kick in and ends up tossing him instead, which she apologises for. When she finds out that ringleader is Lionmane, she remembers an old score her mother had to settle with him and decides to take matters into her own hands.

Feeling that Harry would be more useful gathering up more police than staying with her at the prison, Huntress tranquillises Harry to keep him from protesting and sends him off the island on a boat with the police she freed. Inside Lionmane negotiates his freedom with the mayor of Gotham in exchange for the hostages he's holding. Unsurprisingly, his terms are that any refusal from the mayor would result in death of the hostages, beginning with the warden which is Huntress's main concern. 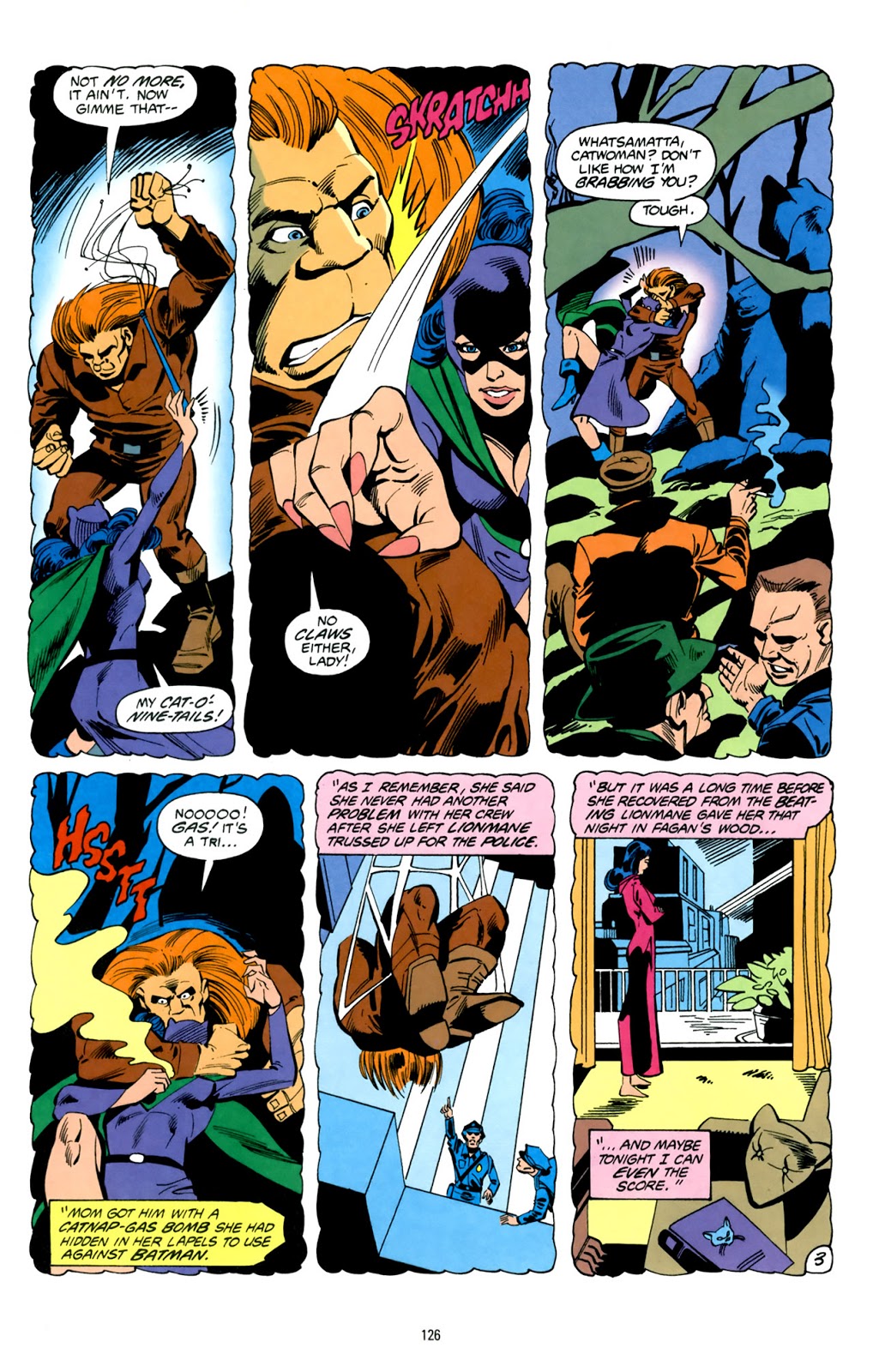 Huntress ends up rescuing the warden from Lionmane's grasp and her plan is to create a distraction until more police arrive. She challenges Lionmane to a one-on-one fight and if he wins, she 'promises' to tell Lionmane where he could locate the stolen jewels Catwoman burried away in Fagan's Wood, which is a secret he's been wanting to know about since his days as Catwoman's henchman. On that alone he accepts Huntress' challenge.

During the fight between Huntress and Lionmane, Huntress fills the reader in on the fateful night in Fagan's Wood where Lionmane betrayed Selina after feeling that she was 'too soft' as a crime boss. He attempts to kill her, but Selina manages to escape by knocking Lionmane out with a catnap gas bomb she had hidden in one of her lapels that she was saving for Batman. Given that his intent was to take over Selina's gang, Selina herself left Lionmane behind to be captured by police.

Even though Selina survived her attack, it also took Selina a long time to recover from the brutal beating she took from Lionmane, which is something Helena herself wants revenge for. Huntress takes a hell of a beating from Lionmane herself given his brute strength and size in comparison with her considerable smaller stature. Huntress however doesn't go down without a fight and manages to hold her own until the police are in a position to intervene.

From the other side of Gotham Bay, a conscious Harry watches the prison from the distance feeling a little resentful of the fact that Helena had chosen to fight alone instead of letting him fight by her side. He also feels his masculinity a bit threatened since he feels it is his responsibility to protect the woman he loves. Before Harry can think more on the issue, he gets a surprise visit from the Joker.

Back at the prison, Huntress continues her fight with Lionmane as their crowd grows wild with desire to do some violence of their own. Lionmane almost succeeds at completely overpowering the Huntress until she finds the opportune moment to strike back. She ends the fight by striking Lionmane with a boulder that knocks him out. By this point, police have complete control of the situation and Huntress asks for a ride back. 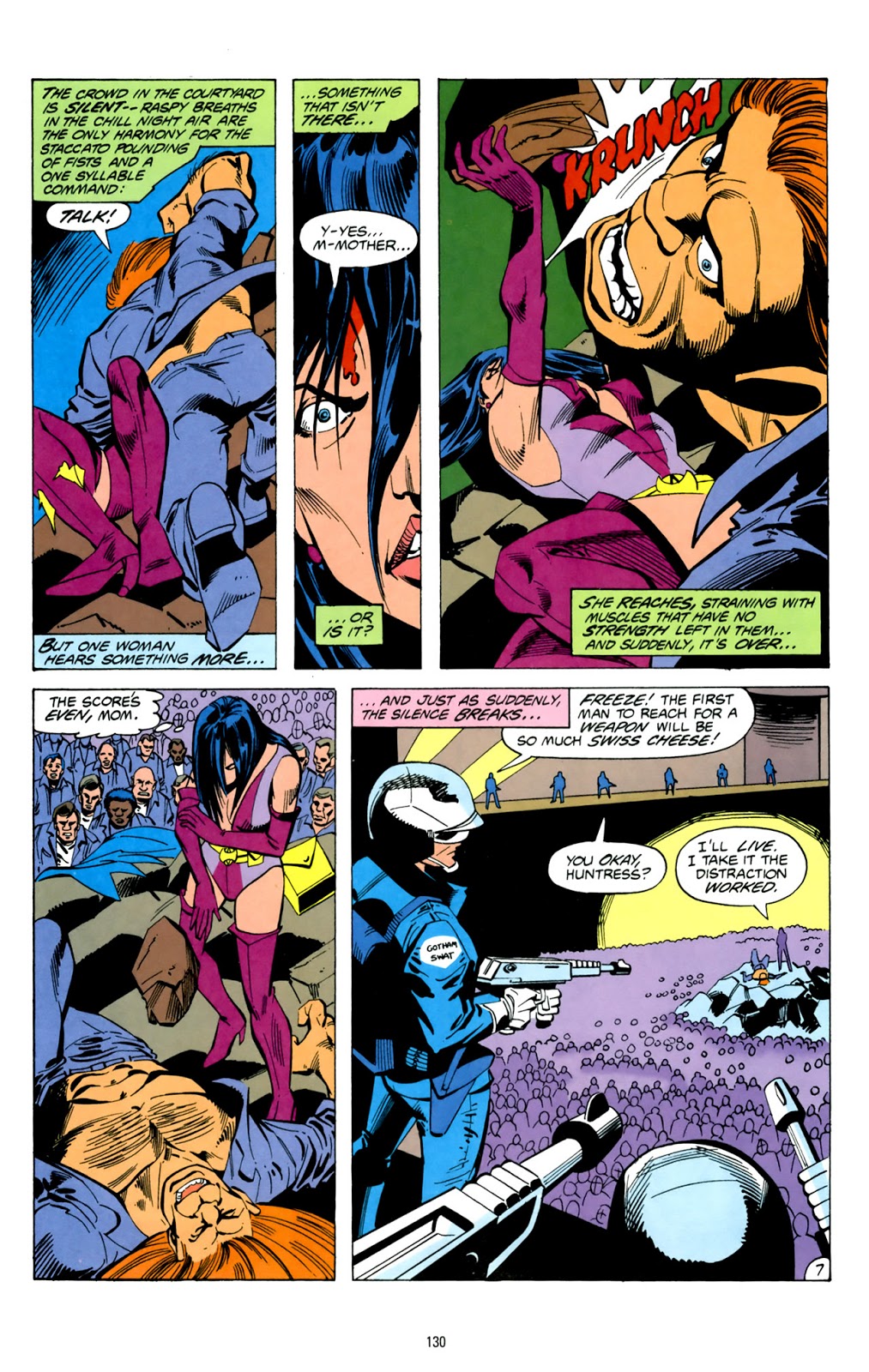 Review: There is honestly not a whole lot to say here except that this is undoubtedly one of my favourite Huntress stories from the pre-Crisis era since it's among the few that deals with Helena's relationship with her mother.

What makes this story very significant in my opinion is that it explores just how important Selina was to Helena growing up that despite her criminal past (which she had issues with), she loved her just as much, even going out of her way to take on the guy who nearly killed her as a way of restoring her mother's honour. Even though Helena could've just let the police handle the situation all on their own, the fact remained that this was a very personal matter for her, and one that she personally felt inclined to settle since her mother was no longer around to do so.

Another great thing I love about this story is that Helena is depicted as a more than capable heroine. Not only is she shown being able to take on men more than half her size, but she's even depicted rescuing men from danger, which is something that's been heavily missing from her characterisation in the New 52. In huge contrast with the New 52 incarnation, this version of Helena Wayne was very much an equal opportunity defender and didn't discriminate based on sex like she does now. As such, she feels that much more heroic as a character worthy of the 'Finest' title. It's definitely a trait I wish Paul Levitz had preserved with the newer version of the character, instead of doing a complete 360 on her personality and making her polar opposite of all of the things that made her likeable in the first place. At this point, I can only hope that a future writer will eventually develop this character in a way that bring her back to her roots, especially since I no longer have faith in Levitz these days to make it happen.

The only complaint I have about this story besides the fact that the dialogue is a bit cheesy, even redundant in some cases, is I was never really fond of the way Paul Levitz wrote Helena's relationship with Harry. Even though it doesn't really occur in this particular story, one of the things I didn't enjoy about Levitz' handling of the Helena/Harry relationship is that he pretty much wrote Harry as calling all the shots in the relationship with Helena being made to look like the more emotionally dependent partner. The fact that Harry was consistently written as sexist (as he was here) didn't really help on that front.

Fortunately in this story, Helena is depicted initiating a serious discussion about her relationship with Harry, and she's even written handling the situation maturely. Who ended up making a final decision, however, that's a discussion for another day.

All in all, this is a great pre-Crisis story to read if you want to know more about how the pre-Crisis Helena valued her relationship with her mother, and if you especially want to see a version of her who is actually heroic.