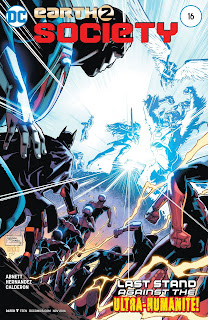 Summary: The Ultra-Humanite has taken control of the Green Lantern and begins to move in on the Justice Society in order to recover Fury's Pandora casket. He wastes no time using the Green Lantern's immense power to take out the four most powerful members of the team: the Flash, Power Girl, Val-Zod, and Red Tornado. Fury takes on the mind-controlled Green Lantern next, but is unsuccessful at stopping him as he overpowers her.

The mind-controlled Green Lantern enters the vault where the Pandora casket is being kept and is met with Red Arrow who was assigned to guard the casket by Fury herself. Red Arrow is subsequently killed by the Ultra-Humanite and he releases his mental grip on the Green Lantern once he is no longer useful to him. The Ultra-Humanite approaches the casket believing he is the only one who is qualified to rebuild the world, but is met with one last group of heroes who put up a final fight before deciding the fate of the new world: Huntress, Hawkgirl, and "Dick Grayson."

Review: There's really nothing to say about this week's issue other than the fact that the finale was pretty abrupt for the buildup this story arc had, probably in preparation for DC relaunching a more classic Justice Society title sometime next year. As such, there is really nothing to report on narrative or character-wise. At least not until next month when the next story arc begins. At best, the only highlight of this month's issue was the Ultra-Humanite summing up this sham of an Earth-2 franchise in one panel: "Earth-2 is a joke. Barren and useless. Theatrical scenery with no substance. You should have left the job of world-building to someone with the genius for it." 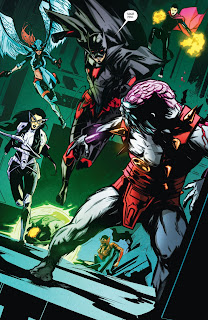 Regardless if Abnett was being meta about the current state of Earth-2 in the current continuity, it's unfortunately true. Given the sad state the franchise was left in when DC editorial drove James Robinson off the original title, and drove the whole damn franchise off of a cliff at high speed when they were left to their own devices, I can't say that I'm sad or even remotely upset about this story arc's abrupt end.

I would probably feel differently about this if I was more invested in this comic and premise, but the fact is I'm not. Seeing as I've found this comic conceptually problematic since issue #1, I can't say that I really care that this happened at all. At this point, I'm just waiting for DC to announce their Rebirth plans for the Justice Society next year, and hope that Dan Abnett sticks around for that. It does certainly feel like this comic is starting to setup for those plans.

Since I really have no feelings about this, I'm not sure how to rate this issue. It wasn't good, it wasn't bad, it wasn't decent, it just was. So I guess I'll just assign a star for everything I liked about this issue: Dan Abnett's writing, Angel Hernandez' art, and the one panel where the Ultra-Humanite summed up the sad state of Earth-2 in the current continuity, meta or not. So, three stars in total. Shortest review I've ever written on my iPhone in five minutes during my lunch break. New record for me!