The Best of Huntress and Power Girl: All-Star Comics #74 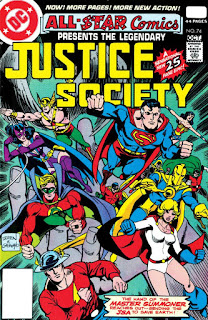 In Gotham City, Helena Wayne takes Kara Zor-L to lunch and together they talk about Kara's problem about keeping her identity a secret. Kara feels like she's always being watched and that she's not good at hiding her powers. She thinks that if she accidentally uses her powers as Karen Starr (her civilian identity), it will easily tip people off that she is Power Girl. Helena confidently reassures Kara that no one will suspect her to be Power Girl or that she is (at the moment) dining with the Huntress. Helena pays the cheque for both of them (how sweet!) and walks out of the restaurant with Kara. As they make their exit, their JSA buzzers (Earth-2 mobiles?) go off summoning them to an impromptu Justice Society meeting.

At JSA headquarters are Doctor Fate, Hawkman, the Flash,  Green Lantern, Huntress, and Power Girl. Doctor Fate lays down what he knows about the 'critical hour' and the 'impending doom' they have to stop. The attending members then split into two groups of three to stop conflicts that are occurring in two different parts of the world: Hawkman, Green Lantern, and Power Girl intervene the conflict that's erupting between the Chinese and the Russians, while the Flash, Doctor Fate, and Huntress intervene the terrorist attack taking place at an International Women's Convention. The two groups succeed in putting a stop to both conflicts, but are unaware of the fact that their intervention actually kickstarted the impending apocalypse by causing the world to double down on the very conflicts they stopped.

Doctor Fate summons all Justice Society heroes to JSA headquarters to explain to them what's really happening and how to prevent further conflicts from erupting: by sitting these conflicts out and let them play out until the 'critical hour' ends. The Justice Society heroes feel uneasy about doing nothing to prevent people from killing each other, but avoid intervening nonetheless to prevent further death and destruction. When the critical hour ends, the Master Summoner appears to the Justice Society to express his disappointment at thwarting his destructive plan and the fact that he has to wait another millennium to try again. 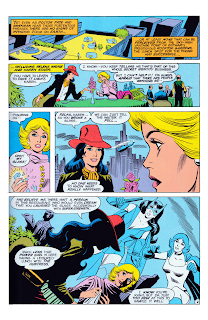 Review: It's 07 September 2016, and you know what that means: It's Helena Wayne's DC calendar birthday today! I figured why not review a pre-Crisis Huntress and Power Girl story for today? Especially the most subtexty one that exists for them in the pre-Crisis era, complete with lunch, flowers, and flirty gazes, all of which happen in the span of two pages?

Femme slash aside (which we'll get to later), this is admittedly a story that started off with a promising idea but struggled to realise its full potential and reach a satisfying conclusion. For example, the idea of a powerful entity appearing every millennium to unleash death and destruction on Earth in itself makes for an interesting villain. Had writer Paul Levitz taken the time to further flesh out the character and establish a backstory for him that explained why he needed to destroy a world every millennium, he could've easily developed an epic Justice Society story with that idea. Unfortunately, however, he didn't, which means that my intrigue as a reader got met only halfway.

Another interesting idea that Levitz struggled to execute was how this powerful entity intended to set his plan for death and destruction into motion. To be fair, Levitz was off to a great start by having the entity trick the Justice Society into fulfilling his goals and by establishing that each time the Justice Society intervened, the conflicts got worse, effectively bringing the world closer to world's end. Where Levitz faltered was in the resolution, which I felt could've been better thought out. For example, this would've been the perfect opportunity to have the Justice Society heroes learn more about their new enemy, where he comes from, and why he wanted to destroy the Earth. By learning as much as they could about the Master Summoner, they could've then developed a better way to prevent his plan from seeing fruition.

By learning the reason he wanted to destroy the Earth, the Justice Society could've used time travel--for example--to fix a critical moment in time that caused the Master Summoner to try to end the world every millennium, effectively ending a vicious cycle. By having the Justice Society just decide to sit out a conflict and allow the death and destruction to run its course, it made them look incompetent, and it also demonstrated that the writer wrote himself into a corner because he hadn't thought the details of his story through. As such, he ended up doing what was easy, resulting in a barely anticlimactic conclusion, which is never a good thing.

Despite those major flaws in the story's plotting, I did still enjoy the story, and I especially enjoyed the interaction between the characters. Levitz does address issues like unchecked male privilege and how this can cause even good men to behave in ways that are sexist. This was most accurately depicted in the Green Lantern and Power Girl scene where Lantern unwittingly said that 'helping others' has made the Justice Society 'better men,' effectively erasing the contributions of its female members. Lantern didn't intend to be sexist, but his socialisation within patriarchal society still taught him sexist behaviour, something Power Girl made him aware of when she called attention to his use of 'men' within the context of a team effort that included her. There was at least one instance where Levitz wasn't thoughtful about the way he addressed the issue of sexism, namely in the scene where he wrote the woman holding the International Women's Convention in Montréal as ignorant of the political nature of the convention, resulting in Doctor Fate mansplaining this to her. I can safely say with 100% certainty that every woman who holds any kind of gender equality convention is more than aware of its political nature. Gender politics is, in fact, the reason these types of conventions exist!

Another thing I enjoyed about this comic (or maybe it was the first thing?) was the lunch scene between Kara Zor-L and Helena Wayne. I love how their friendship is depicted in this scene and I especially I love the way it is drawn by artist Joe Staton. There is some lesbian subtext between them in this scene, namely in the form of flowers being present on the table, the fact that they're both well dressed, the flirty way in which they make eye contact, and the fact that Helena pays the cheque for both of them. Whether or not this was done on purpose by Levitz and Staton is unknown because the Comics Code of Authority at the time of this comic's publication prevented any depiction of homosexuality, and the visual cues are pretty subtle. They're not obvious enough to confirm to the reader that this is a romantic date, but there's also enough information for a reader to potentially interpret the characters as having romantic interest at least. 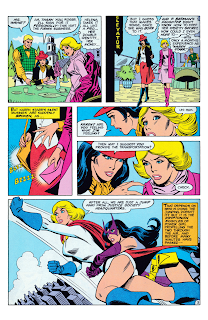 The conversation between Kara and Helena during this scene is platonic in nature, but it's still meaningful to both women as it centres on Kara's struggles with 'blending in' as human because she doesn't feel as though she's mastered controlling her more alien side. I felt the scene in itself was very sweet in its depiction because Helena tries to reassure Kara that she does look human to the world at large and that no one would easily suspect her to be Power Girl. She makes it clear right away that she does care for Kara and even pays the cheque for her, which--in my opinion--is not insignificant. I know Helena's rich, but how often do your friends actually pay for your meals, especially expensive ones? (Rarely, in my experience, though I'm pretty sure Helena pays the cheque each time).

I know I always love Joe Staton's artwork in many of the pre-Crisis Huntress and Justice Society comics, but I admittedly felt he really brought his best to the table (no pun intended) to the Kara and Helena lunch scene. While Staton never struggled to draw anatomy and has consistently drawn Kara and Helena with toned and muscular bodies as appropriate for their superhero activities, both women look really posh on these two pages. I love the outfit that Helena wears in this scene (she even has a hat!) and Kara looks equally elegant. The colours that they wear also fit them perfectly. The combination of red, white, and black conveys Helena's confidence in these pages while the pink does a fine job at conveying Kara's vulnerability. The women are also not sexualised in these pages despite the lesbian subtext, which is great, because it does show respect for both characters.

Though not a perfect story in terms of plotting and execution, there is still enough about All-Star Comics #74 that I find enjoyable to make this one of my favourite Justice Society stories of all time. I would've definitely loved more scenes with Huntress and Power Girl working together, but the pages we do get with them is worth the whole damn comic.