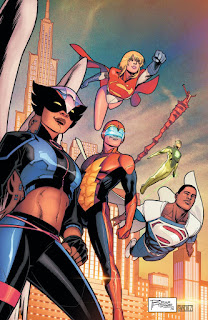 EARTH 2: SOCIETY #22
Written by DAN ABNETT
Art by VICENTE CIFUENTES
Cover by BRUNO REDONDO
In this series finale, a new dawn rises on Earth-2. After a terrible struggle, the Wonders have restored their world, better than ever. Can they become the new heroes and caretakers the reborn planet needs to protect it from future threats? And what of the price they paid for peace—what is the final fate of the Earth-2 Batman and his legacy?
On sale MARCH 8 • 32 pg, FC, $3.99 US • RATED T • FINAL ISSUE

Apparently, Earth-2: Society #21 is not the final issue as originally solicited, but the March solicitation for #22 seems to be hinting at DC finally dropping the other problem Earth-2 and Justice Society fans have been having with this franchise since 2013:

"And what of the price they paid for peace—what is the final fate of the Earth-2 Batman and his legacy?"

If my eyes are not deceiving me, it sounds like DC will be dropping this false Dick Grayson character they've been trying to sell to fans for two years (to no success) at the conclusion of this series. Personally, I felt they should've dropped this character from the Earth-2 Batman narrative at the conclusion of the Annual itself when he finally reunited with his son instead of killing him off like they're implying here. Nonetheless, it looks like DC finally got the message. It finally dawned on them that a new Earth-2 Batman was never a popular idea with Earth-2 and Justice Society fans--the primary audience for this title.

Thomas Wayne only worked as Batman in Flashpoint and the Earth-2 Dick Grayson only sells as the Golden Age Robin that Bruce actively raised like a son alongside his own daughter, Helena Wayne. Thomas Wayne's death on Earth-2 should've never been retconned to have him fill his son's boots, especially since doing so changed Bruce's narrative in a profoundly stupid way. The Earth-2 Dick Grayson similarly should've never had his original history retconned if they were planning to reinstate him back into the Earth-2 Batman narrative. His reinstatement should've also never resulted in the marginalisation of Helena Wayne as her own father's successor. 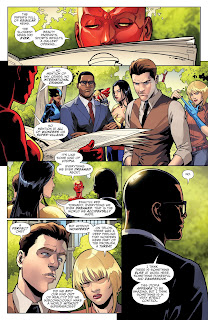 So what happens now? Honestly, I don't know. At this point, we only know that the classic Justice Society is set to return on Prime Earth, but we don't know which characters are going to actually show up with that classic Justice Society. Only three classic members have been confirmed so far: Johnny Thunder, Kent Nelson, and Jay Garrick. We also know--based on the solicitation--that the new Earth-2 Dan Abnett created is here to stay, so we can probably expect an end to the constant "world's end!" stories moving forward.

At best, Abnett in his interviews seems to hint that this particular series will be concluding, but there are still more stories to be told with these Earth-2 characters. So at the very least, it does sound like a new Earth-2 title could still be launched. If it does, without a new Batman and more focus on the characters they do have with more low-level stories, this new Earth-2 series could potentially sell better than Earth-2: Society did.

I don't think a third Earth-2 series will sell as well as James Robinson's original series (especially with Justice Society Rebirth on the horizon), but at least the world Dan Abnett created is a completely clean slate from the previous two series, so that should give everyone a fresh new start. Without the baggage of Earth-2: World's End in particular, that should help a new Earth-2 series sell at 40-25K at least.

What do I personally want to see happen? Exactly what I've been wanting since 2011: a proper Justice Society team with more focus on character development and less "epic" storytelling. Keep the threats and stories low-level so that the characters are not at constant war. Take the time to develop characters like Alan Scott, Jay Garrick, Kendra Munoz-Saunders, and Val-Zod. Take the time to properly build the relationships between these characters in a meaningful way. Keep the cast small to avoid weakening the story and characters.

When it comes to the Batman and Superman legacies of Earth-2, I definitely want to see Huntress and Power Girl occupying those legacies. They are the true successors of the Bruce Wayne and Clark Kent of their respective world and need to be handled as such. I also want to see them working together again and for their characters and relationship to be given more meaningful development. It is long overdue now. 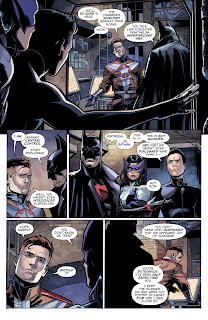 On the subject of Helena Wayne, it's been my observation that DC has been largely excluding her from Earth-2 covers and solicitations since returning to Earth-2, and they've been very blatant in ignoring her as her own father's successor. That is something I would like for DC to stop doing moving forward, especially since this kind of behaviour sends a very troubling message about how women are valued as Batman legacy characters. I expect this kind of childish behaviour from fans who don't like the character, but I expect more professionalism from DC Entertainment as a major business trying to sell a product.

Helena isn't some insignificant character unworthy of visibility and respect. She is the daughter of Batman and Catwoman, DC's second most iconic couple right after Lois and Clark. That alone is a major selling point of the character that it's incredibly foolish for DC to not want to bank on that. If they want a Batman character that they can sell and market to the Batman crowd, they already have one with Helena Wayne. She is truly one of a kind and that alone will draw the attention of the very audience they've been trying to target for four years in addition to the Justice Society fanbase. That means they need to actually feature Helena on covers, mention her in their solicitations, and to actually market her as the true legacy of her parents.

Beyond that, there's nothing else more to say. I just want more thoughtful, meaningful stories with the characters I love, and for them to be handled with more care and respect. If we get the more classic versions of all of these characters back with Justice Society Rebirth, fantastic! I'll be completely on board with that. If they decide to launch a new Earth-2 title alongside Justice Society Rebirth so that both classic fans and New 52 fans can still read about their favourite characters, I'll be on board with that too. At least this new Earth-2 sounds like it's getting back on track with what people loved about the concept, and that's all that matters.
Posted by Diane Darcy at 16:55