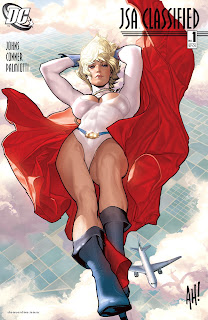 Summary: It's been 20 years since Crisis on Infinite Earths collapsed the multiverse into a single Earth with a single history. It seems that most of DC's heroes remained largely unaffected and some may have even benefitted from the cosmic reboot. But what about Power Girl? Is she the long lost cousin of Superman? The granddaughter of Arion? Or a future member of the Legion of Superheroes? Who is Power Girl and where does she fit into a world that seems to have a place for everyone except for her? These are the questions Power Girl seeks to answer as she begins to doubt her origins and her place on this different Earth.

While all of these thoughts are passing through Power Girl's mind, a man's life becomes endangered when he falls off of a lift. She rescues the man, all seems fine and dandy at first. But then, out of nowhere, the brother of Arion--Garn Danuuth--starts attacking Power Girl in the middle of Manhattan. Power Girl fights back with all her might, only to find out she was fighting a hallucination. The Justice Society appears to try and help her, but Power Girl doesn't want their help. Stargirl offers Power Girl to continue helping her find her past, but Power Girl declines requesting that they leave her past alone.

Somewhere, behind the scenes, a mysterious villain emerges seemingly responsible for Power Girl's hallucinations. He too appears interested in Power Girl's past...but for what purpose?

Review: It is Power Girl's 40th anniversary this year and I simply couldn't let this otherwise politically awful year end without celebrating that significant milestone in the character's history. And what better way to do that than to review the story that brought to light everything that went wrong for the pre-Crisis Earth-2 characters by DC master writer Geoff Johns?

Following the events of Crisis on Infinite Earths, there is no property I can think of that suffered the most from that cosmic reboot than the Justice Society franchise. The characters were originally retconned out of existence, then brought back, then Zero Hour tried to wipe them out again, and then they made a triumphant return in 1999, this time seemingly here to stay. But in addition to attempting to wipe DC's Golden Age heroes out of existence in favour of the more "iconic" Silver Age characters, Crisis also led to radical changes to the histories of some of these characters with two of the most notable examples being the Earth-2 Huntress and Power Girl. 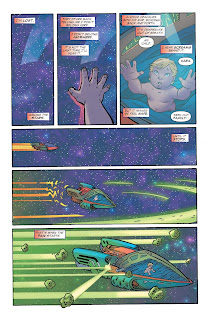 The Earth-2 Huntress went from being Helena Wayne--the daughter of the Golden Age Batman and Catwoman--to becoming the sole surviving member of a crime family with a drastically different personality as Helena Bertinelli. Power Girl was originally "acknowledged" as having been Superman's cousin post-Crisis, but was eventually retconned as having been "Arion's granddaughter" instead. Power Girl is the character Johns focuses on for addressing that significant discrepancy from the Crisis reboot head on.

One thing I've always loved about Geoff Johns as a writer is the care and respect that he puts into all of the characters that he works on. You can't question Johns' love for these characters because more often than not, he develops their stories in ways that make you empathise with them right away. If you started out not knowing anything about Power Girl, who she is, where she came from, or you simply didn't care about her character prior to this story, Johns successfully changes that around for the reader.

I can safely say for myself my only exposure to Power Girl prior to this story was during the Joker's Last Laugh storyline from 2001 where she fetched Harley Quinn for Oracle because the Joker wanted to get her pregnant with his child. That was all I knew of Power Girl back then. She was simply that busty powerhouse that captured Harley Quinn and was never seen or heard from again. The only other memorable thing from that Power Girl appearance was Stephanie Brown telling Cassandra Cain that "Oracle dialled 1-800-Power-Girl," which was actually pretty funny. But beyond that, there was no reason to get into Power Girl's character. Then I came across the first four issues of JSA Classified by Geoff Johns and Amanda Conner.

In contrast with the Power Girl I met years earlier, Johns actually presents her as a real personality with real thoughts and emotions. In his story, Power Girl's "powerhouse" status takes back seat to the person that is Power Girl. Johns doesn't answer that question right away, but he nonetheless sets both the character and the reader off on the journey to discovering who she is. In many ways, Johns' writing of Power Girl in this story very much serves as a reintroduction to the character. He doesn't reboot her, but he does start his storyline by asking the most important question about her: what is her real origin? 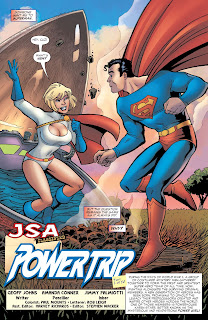 One by one, Johns tackles all of the origins that have been proposed for the character before inevitably zeroing in on the character's true origin at the conclusion of his story. For his first issue, Johns chose to tackle two of those origin stories: her original Earth-2 origin as the cousin of the Golden Age Superman and the one that was immediately given to her post-Crisis as the granddaughter of Arion.

The question of Power Girl's true history dances back and forth between these two narratives, with Johns more heavily emphasising her "Superman's cousin" origin to be her true history but without actually confirming it. Johns continues to cast doubt on this idea by proposing whether or not she is the cousin of the post-Crisis Superman or if her mind is playing tricks on her. It's a very clever use of the "half-truth" and "lost memories" tactics. Power Girl is correctly remembering she is Superman's cousin, but not the Superman of the Earth she's now living on.

Throughout this first issue, Johns makes nice homages to Power Girl's Earth-2 past and even does an homage to the cover of the 1959 issue of Action Comics #252 that debuted the original Silver Age Supergirl. And of course, his story wouldn't be what it is without the artwork by Amanda Conner and her husband Jimmy Palmiotti who really sell it on the emotional side. Amanda Conner is known for her very energetic art style, which works tremendously for comics of the comedy genre, but has rarely had the opportunity to work with a story that comes with a more serious tone. Conner successfully showed in her first issue of JSA Classified that she was up to the challenge.

Conner's effective use of expression in particular really does help to bring out some of the more comedic parts of Johns' script, and it also helps to put a stronger weight on Power Girl's feelings on the more serious parts of it. Conner successfully strikes a nice balance between when it is appropriate to be "funny" and when it is appropriate to be "serious," effectively making her one of the best visual storytellers in this industry and the best choice artist for this story.

The only thing I found mildly off-putting about this first issue was the occasional use of cheesecake, most notably where Power Girl's large rack was concerned. Interestingly, Johns did openly acknowledge at one point in his story that this was a problem that affected the character often, but that was only for the one page where Power Girl--in a meta sort of way--acknowledged that most of the time "people don't look at her face." The other times, however, it was just unnecessary objectification of the character. Fortunately, it only happened about two or three times in this issue (most notably in the opening pages where Dr. Mid-Nite is running tests on her) and it's not pervasive throughout this story, nor a "running gag" like in other stories featuring Power Girl. For the most part, Power Girl is handled with respect.

On the whole, this continues to be a strong first issue of a mini arc featuring one of the Justice Society's most beloved heroines, even 11 years after its original publication. It also continues to be one of the best reintroductions to Power Girl in the character's publication history. It's possibly even the best introduction of her character since her first appearance in All-Star Comics #58 on 31 December 1975 since it starts to bring the character back to her roots. All in all, off to a great start.

Next week, we will continue our celebration of Power Girl's 40th Anniversary with JSA Classified #2, where Johns and Conner continue to peel back the layers of the character's 4 decade history!