The Best of the Huntress: Wonder Woman #298 Review 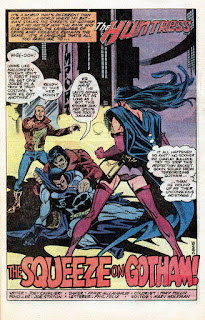 Review: It's kind of serendipitous that I got around to reviewing this story arc around the time Earth-2: Society writer Dan Abnett described the new Earth-2 Dick Grayson as an everyman who took up the mantle of Batman, not because he had the skills to take on that role, but because he had the "enormous courage" to do so. It's interesting because Huntress writer Joey Cavalieri explored that same idea in this story with Charley Bullock, but with two major differences: first, Helena is still the hero of her own story, and second, Charley became inspired by Batman to become a superhero. He didn't become another Batman, which makes him--in many ways--a far more interesting character than the obvious marketing tool Dan Abnett is working with in the Earth-2: Society comic.

Prior to this story arc, Charley was a recurring character in Helena's ongoing narrative. He was very much an everyman working a normal job, living a normal life. He worked in the same profession as Helena as an associate partner at her law firm, and like Helena, he too became disillusioned by how easily powerful criminals exploited loopholes in the justice system to get away with crime. This was a theme that began to surface during the Crimelord story arc and it is the theme that Joey Cavalieri chose to explore more in depth in this chapter. 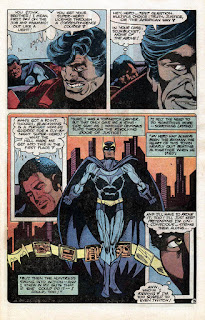 In the last chapter we saw Charley come to the epiphany that a new hero was needed in Gotham now that the Batman was no longer around to protect it. Though Helena Wayne had taken it upon herself to continue what her father started as the Huntress, Charley felt that having one hero protect Gotham wasn't enough, which prompted him to develop a superhero identity of his own as Blackwing. In the last chapter we only saw him debut his superhero persona, but we didn't learn the full details of his decision to become a costumed hero until this chapter.

It was established right away in the last chapter that despite having enormous courage, Charley also didn't have the experience to do the kind of work the Huntress does every night in Gotham. However, he rationalised in this chapter that if an ordinary woman like the Huntress could do it, then so could he. It wasn't until he actually tried to do what the Huntress does every night that he realised how dangerous and scary this line of work actually is. This was actually brilliant characterisation by Cavalieri because it made Charley feel like a real person trying to do something extraordinary.

Charley didn't magically know how to be Batman upon putting on a costume. He actually used all that he had to try to take on a dangerous foe. He never received in any combat training, but he brought with him courage, inspiration, and a strong determination to do justice right. This is one way that he is similar but also significantly different from Helena. Though Helena also didn't enter the scene with experience and made her fair share of rookie mistakes when she first started out as the Huntress, she still had the privilege of being Bruce Wayne's biological daughter, and was therefore raised by Batman himself.

Though Bruce didn't raise Helena to follow in his footsteps, she still benefitted from having access to the best education her father's money could afford. As a wealthy woman, she could actually afford to immerse herself in academia and extracurricular activities growing up because she never had to work to help her family financially. They were more than financially stable. Helena could therefore commit to learning anything she wanted to learn, and even graduated valedictorian from one of the hardest universities to get into in the United States: Harvard. Among the courses Helena took in uni included psychology courses, and she was particularly active in athletics. 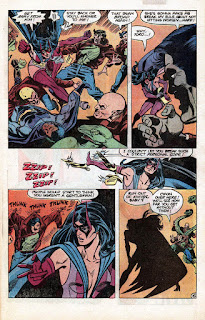 Between access to higher education, athletics, and learning how her father solved cases as Batman, and how her mother cheated the system as Catwoman, Helena--in many ways--already came with the tools needed to succeed her own father as the Huntress. The only thing she only truly needed to do was gain experience. By the time Charley took on the mantle of Blackwing, Helena had already acquired six years of experience fighting crime as the Huntress. Seeing her juxtaposed with Charley showed a significant difference in the way these two people operate as superheroes, as well as how they respond to dangerous situations.

As someone with no experience, Charley was scared for his life and faked unconsciousness as a safety measure after his first attempt at superheroics. Helena by contrast did not fear for her life, but she did fear for the life of Charley (who is her co-worker and friend), which affected the way she fought against Toro and Boa, the story's main villains. Since she rarely had to worry about protecting anyone during her cases as the Huntress, Helena could easily focus on capturing the criminals she went after with few challenges. In having someone to protect this time around, this posed a new challenge to the heroine in ways she was not prepared for. Helena knows many different ways she can disarm and take down a criminal, but does she know how to do this without risking someone else's life in the process? This was the main challenge Helena faced during her encounter with Toro and Boa to the point where she was unable to fully concentrate on taking down her new villains, leading to the chapter's cliffhanger.

On the whole, Cavalieri does amazing character work in this chapter. In juxtaposing an everyman who decided to become a superhero with a woman who had the luxury of being raised by a superhero, it created an interesting new narrative that was engaging in a wholly different way from past Huntress stories. It helped that Charley wasn't a character that literally came out of nowhere to take up the mantle of Batman like the Earth-2: World's End version of Dick Grayson. This was a character who was already a member of Helena's supporting cast and had an existing relationship with the lead heroine. This was a character both Paul Levitz and Joey Cavalieri allowed you to spend time with in the previous chapters, which created familiarity and allowed the reader to get invested in this character in a way that actually felt organic.