The Best of the Huntress: Wonder Woman #303 Review 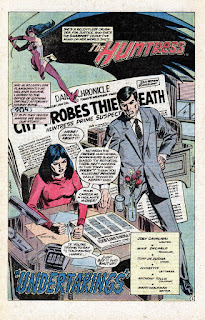 Summary: News of the Huntress allegedly killing a bank robber has spread like wildfire throughout the mainstream media, and Harry Sims once again castigates his girlfriend on how she handled a dangerous criminal irresponsibly. Fed up with her boyfriend's rebukes, Helena Wayne fires back at him by pointing out how he's losing perspective on a case where evidence of her involvement in the criminal's death is faulty at best.

Upon Harry revealing that all of the criminals she's "tangled" with recently has ended up dead, Helena begins to take notice of a suspicious recurring pattern. If all of these criminals are "dying" on her, who is signing off on their death certificates and where are their funerals being held? Taking a closer look at each of the criminals profiles, she narrows down her suspects to the personnel of one funeral home in Gotham. The only one in town seemingly "interested" in these criminals.

When the Huntress goes out to investigate the suspicious funeral home, what she sees next may be more than she had bargained for. Who is the Undertaker and why is he killing off all of these criminals she's been capturing? More importantly, what is he up to and why? 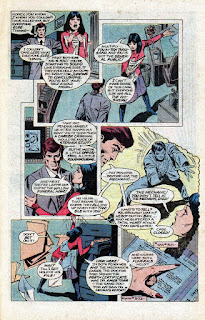 Review: Without question, this is one of my favourite chapters in Joey Cavalieri's Undertaker story. Considering it's April Fools Day today, it seems like an appropriate chapter to talk about. Between Pat Pending and the Huntress thinking they were both one step ahead of each other, the joke was ultimately on them both as neither one was as in control of the situation as they thought.

As meticulous as the Huntress was to capture the real culprits of a crime she was being framed for, and as meticulous as Pat Pending was to avoid being captured by her--even hoping to humiliate her by duping her in the worst way possible--neither one came out on top here. It turned out they were both being manipulated by a third party from the moment the Huntress took notice of the Mechanic two chapters ago.

This is excellent plot build-up by Joey Cavalieri as he continues to unravel the Undertaker's sinister and mostly obscure operation. What I like most about this is that the reader knows as much as the Huntress does, which keeps the unravelling of mysteries interesting. By not switching back and forth between what the Undertaker is doing and how the Huntress is investigating her newest (and frankly dangerous) case, the reader is afforded the opportunity to learn details at the same time as the lead heroine, which makes you feel like you are experiencing this new adventure with her.

Another thing I love about this chapter is the character of the Undertaker himself. Despite not being a fighter and boisterous about his capabilities, he is still pretty meticulous and calculating. Absolutely no one--not even the Huntress--counted on this being something more than business as usual. What Helena expected to be nothing more than just a series of bank robberies turned out to be a ruse in a much more sinister scheme by a much more sinister man. What's more is that in Huntress digging too deep into a hole she thought was small, she found herself falling deeper into a larger hole that told a much bigger story than the one she anticipated. I really love how Cavalieri built upon the seeds he planted earlier in the first two chapters. 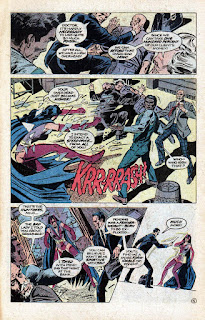 The thing I continue to enjoy most about this first story arc is Joey Cavalieri's characterisation of Helena. I still don't like Harry since he's still pretty abusive towards Helena, but I like that Helena isn't depicted as "taking it" because she happens to be in a relationship with him. Instead, she calls him out when he's in the wrong and asserts herself when he starts scolding her like a child. Of course, it would've been better if Cavalieri had written her as leaving him entirely, but we all know why that never happened. (*Cough*Crisis on Infinite Earths*Cough*)

Outside of her relationship with Harry, I continue to enjoy seeing Helena written as meticulous and passionate--traits that are dextrously augmented by Mike De Carlo's pencils. While he has a slightly different art style from Joe Staton's more expressive style, he still capture's Helena's thoughts, emotions, and body language in ways that are still recognisable to the character. His style also matches well with Joey Cavalieri's style of writing and even fits the darker tone of the story.

The only complaint I continue to have with this story arc is the one-sided depiction of black men as uneducated criminals, this time coming in the form of Milo who is introduced for the first time in this chapter. It's especially problematic as he is the sole black male character in this chapter and he reads more like a racist caricature than an actual person. He doesn't even read like a henchman since even the white henchmen in this story are given way more personality than he is.

I don't think it was Cavalieri's intention to depict Milo in a way reinforced racist stereotypes against black men in America, but lack of awareness still did not work in his favour. If anything, Milo's introduction in this chapter showed that he didn't know how to write black men as diverse human beings at the time of this story's publication. Other than that, this is still a pretty strong chapter that ends on a rather edgy cliffhanger.