Road to Justice Society Rebirth: What We Know So Far, Week 01 (Spoilers Ahead) 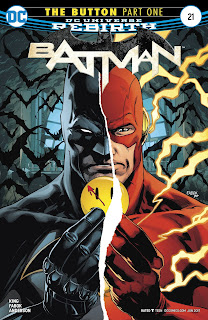 It's a really exciting time to be a DC Comics fan right now, and this year is proving to be a really exciting year for Rebirth. While we still don't know the status quo of the classic Justice Society (or that of many other pre-Crisis Earth-2 characters for that matter), we've already had at least five of them confirmed as returning, and we've even gotten teases of ones that we can potentially see in the future.

Amongst the Justice Society heroes and villains that have returned/will return in Rebirth so far include:
The only character that's been appearing in Rebirth so far that I'm not sure is confirmed as an absolute return is Power Girl. This is in part because the Harley Quinn title she's been appearing in is a self-contained comic that functions independently of the events of Prime Earth, and in part because it was originally the New 52 version of Power Girl that started appearing in that comic.

Post-Rebirth, however, there have no references to either Earth-2 or Helena Wayne. This is very unusual for the New 52 version of Kara who was obsessed with returning to Earth-2, and she's not the type to suddenly "forget" that her best friend exists. There's also the fact that Helena Wayne has not made a single appearance with Kara in Harley Quinn despite being her partner, which seems to confirm the "forgotten" part. Additionally, Kara's pre-Flashpoint friendship with Atlee (aka Terra) has been re-established in Harley Quinn, and she's back to sporting her classic costume and not the New 52 version.

Given that Helena Wayne is suddenly out of the picture and Kara is being characterised more closely to her classic self, it's probably safe to assume that this version of Power Girl will eventually turnout to be the pre-Crisis Earth-2 original who is a member of the missing Justice Society. The best evidence I have for this at the moment is the fact that one of the "three Jokers" (the post-Crisis Joker) has appeared in Harley Quinn already. But until DC actually confirms Power Girl's status in the Rebirth universe, we can't really say--for now--that she is one of the confirmed returns. DC may still later establish her as one of the "forgotten" Justice Society members, and may still later explore how she (properly) returns. 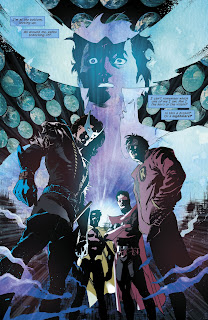 Other Justice Society and pre-Crisis Earth-2 characters who have been teased in Rebirth so far have included:
At the moment, we don't know how any of the pieces fit together, and today's first chapter of "The Button" hasn't revealed anything significant about the Rebirth universe, at least not as it relates to the Justice Society. At best, we did get our first tease of Doctor Manhattan's involvement and the magnitude of his god-like powers in today's first chapter of "The Button," but no major reveals about the nature of this new DC Earth yet.

I would say the most significant reveal about the current status of the Rebirth universe and multiverse came in today's issue of Trinity. In today's issue, the Prime Earth Superman talks with Batman and Wonder Woman about the possibility of their lives being manipulated by a powerful being, and may have been doing this consistently throughout time (in reference to past DC reboots). He comes to this conclusion following the events of "Superman Reborn" in which the post-Crisis Superman merged with his New 52 counterpart after he learned that "someone" had "split him in two." In the pages leading to the double-page spread showing the various doppelgängers of the Trinity from the multiverse (including the pre-Crisis Earth-2), Superman provided the most thought-provoking reveal:

[My heart is] telling me to tread lightly...because reality is on thin ice. Everything was falling apart around us. It looked liked Metropolis...but I knew it represented something more. Dozens of Supermen...Batmen...Wonder Women...all spilling out of the ether...the multiverse revealing countless possibilities...probabilities...and I realized it was all part of some grand scheme...that my life...that all of our lives...might be a toy in some sort of celestial toy box.


Though Superman was describing a recurring dream to Batman and Wonder Woman, this is still a very significant detail because it starts to provide evidence to my own theory about the relativity of time in the DC multiverse--specifically the simultaneity of it--and how this is going to factor into the resurfacing of various DC characters, especially "long forgotten" ones. It's also teasing that the original pre-Crisis multiverse is still out there existing simultaneously with the Rebirth universe, the New 52 multiverse, and every other alternate universe DC has explored. Because Doctor Manhattan experiences all of time simultaneously, the order of events as perceived by other observers such as the DC characters (and even DC readers) is completely irrelevant. This all goes back to Doctor Manhattan's roots as a quantum physicist and specifically Einstein's Theory of Relativity. 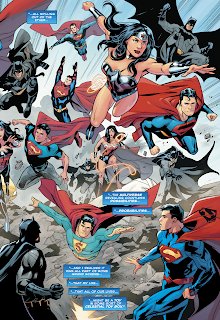 The other significant detail here is that Doctor Manhattan and Mr. Oz don't appear to just be tinkering with the mainstream DC Earth, but with the entire multiverse as well. This at least appears to be in line with my other theory about how the pre-Crisis Earth-2 could've "evolved" into the New 52 version, resulting in the versions of the Earth-2 characters we saw in the New 52. A lot of what's happening with the "past and present DC" clashing in Rebirth seems to be centred on Doctor Manhattan's perception of time as non-linear.

The fact that Mr. Oz is even hiding various DC characters in a "dimensional prison" where the passage of time is not felt (a prison that Mr. Mxyzptlk described as pure nothingness in "Superman Reborn") could also mean a future revisit of the Vanishing Point or the void outside of spacetime where Convergence occurred. This would at least start to provide some evidence for my other theory that Doctor Manhattan composed this new Earth from the various stolen cities or timelines that participated in Convergence, and may have grabbed some of these characters and histories in transit to their original universes following this event. Some elements were used to create this new DC Earth, and others were simply kept in oblivion or outside of spacetime.

Questions that continue to linger as of this week:
I supposed we'll learn more answers to these lingering questions as phase 002 of Rebirth continues to unfold throughout year. One thing I am increasingly becoming optimistic about is the likelihood of my favourite Earth-2 ladies returning, especially given the teases we've already gotten for the original Earth-2 Dick Grayson, Superman, and Batman. There's also the fact that Geoff Johns has been trying to reinstate a character like the classic Helena Wayne Huntress back into mainstream DC continuity since Infinite Crisis. Now that Johns is actually steering the larger DC ship as captain, perhaps we will finally get back the classic Helena Wayne we've all been waiting on for so long, and not doppelgängers of her like in the past 12 years.

As we learn more about Rebirth, it's increasingly starting to look like DC is inviting back not only the DC fans the New 52 reboot alienated, but even the ones the Crisis on Infinite Earths reboot alienated decades ago. After all, why stop only at post-Crisis history when there are still 50 years worth of DC comics history to reclaim?
Posted by Diane Darcy at 19:28