Road to Justice Society Rebirth: What We Know So Far, Week 02 (Spoilers Ahead) 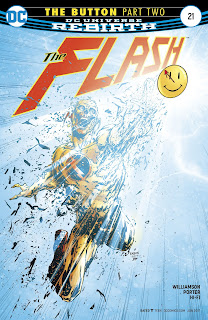 We are finally halfway through "The Button" story arc with this week's The Flash #21, and plenty of exciting things happen in this week's second instalment that are definitely worth paying the $3.99 cover price for. I won't spoil everything that happens in this week's second instalment, but I do want to talk about what this week's reveals (coupled with past reveals) might mean for the Justice Society's Rebirth. Perhaps we may even see a Rebirth of the pre-Crisis Earth-2 since the original pre-Crisis multiverse is now being teased across various Rebirth books. Really exciting stuff, I can barely contain myself!

And of course, this wouldn't be a Helena Wayne Huntress blog if we didn't spend the rest of the post speculating what this week's reveals might mean for our favourite crossbow-wielding Dark Knight Daughter! Let's get right to it! And oh yes! There are spoilers ahead! Stop here now if you haven't been reading "The Button" or any of the Rebirth comics, and would like the chance to catch up before reading any of my wild theories on what I think is going on. Your call!

Here's what we know of the Justice Society's Rebirth so far: 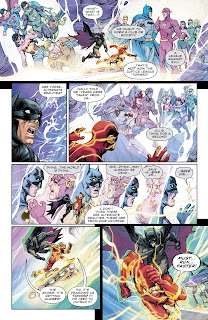 So far the recurring theme in Rebirth is the stealing of history from each of the individual DC characters, and even the stealing of DC history itself. Exactly what Dr. Manhattan's motive is for consistently tampering with DC history isn't known, but he is apparently against the heroes having happy endings, hence why their timelines keep resetting and diverging as soon as they achieve any level of happiness. I'm also assuming it's the reason characters like the Golden Age Trinity, their female successors, and the Justice Society keep getting erased and hurt by these universe resets, especially as the superheroes who symbolise DC's Golden Age, optimism, hope, and happiness. That last part is my theory anyways.

Looking at the whole picture--or at least the pieces available to us--Rebirth appears to be implying that each universe reset has occurred in a moment when the characters have collectively achieved a level of stability and happiness, most notably Batman. For an excellent case in point: let's look at the pre-Crisis continuity.

Technically, the first DC reboot occurred in 1955 when characters like Barry Allen and Hal Jordan appeared, replacing Jay Garrick and Alan Scott as the mainstream versions of the Flash and Green Lantern respectively, kickstarting DC's Silver Age. The Justice League similarly got together for the first time in 1960 with mostly new characters, effectively erasing the Justice Society from existence. DC's Golden Age continuity was not re-acknowledged until 1961 when the "Flash of Two Worlds" storyline allowed Barry to travel the multiverse for the first time, allowing him to land on the Golden Age Earth that later became known as Earth-2.

For the most part, DC's Earth-1 and Earth-2 continuities were very divergent by nature, with the only constants between both universes being Batman, Superman, and Wonder Woman with characters like Green Arrow and Aquaman also sticking around. However, the histories of Batman, Superman, and Wonder Woman between the Golden and Silver Ages retroactively diverged in 1955, the same year the Golden Age Batman married Catwoman. I'm kind of wondering now if the marriage of the Golden Bruce Wayne will be used as the crucial event that led to the creation of the Silver Age continuity with Earth-1, especially since he achieved the highest level of happiness by this point?

When we similarly look at the end of the pre-Crisis continuity, the Golden Age Bruce Wayne had already passed away by this point, but his Silver Age counterpart on Earth-1 began to follow in his footsteps. This was mostly facilitated through his meeting of his Golden Age counterpart's adult daughter, Helena Wayne, who was by now functioning as a full-time member of the Justice Society as the Huntress.

The character of Helena Wayne by herself is also a symbol of hope and optimism. As Bruce's daughter with his iconic love interest--Selina Kyle--Helena symbolises the happier portion of the Golden Age Bruce Wayne's life. She also symbolises hope for the Silver Age Bruce Wayne because her existence allows him to see the person he can become in his respective future.

Surely enough, the moment the Silver Age Bruce accepts the Earth-2 Helena Wayne as a member of his family and he starts dating the Earth-1 counterpart of her mother, that's when Crisis on Infinite Earths destroys the multiverse, and Helena along with it. By the time we see the Huntress again in the post-Crisis continuity, she isn't Helena Wayne anymore, but Helena Bertinelli, a woman who looks like Helena Wayne, but has a darker, much more traumatic past. Also in contrast with the pre-Crisis Helena Wayne, Helena Bertinelli was depicted as being much more violent, which often put her at odds with the grimmer, darker post-Crisis Bruce Wayne who often rejected her. Was the post-Crisis Helena Bertinelli punishment for both Bruce and Helena Wayne for inspiring happiness in their pre-Crisis lives? 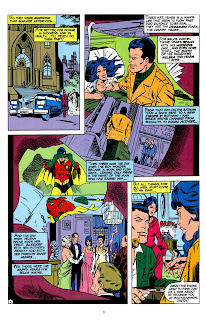 While Helena Bertinelli never became a fully accepted member of the Batfamily by Bruce, he still did love Selina Kyle. Just like his Golden Age and Silver Age counterparts, he eventually got together with Selina and pursued a serious romantic relationship with her. Once again, as soon as both Bruce and Selina found happiness with each other, the universe rebooted itself again, leading to the New 52 universe where they are once again just friends with benefits.

This recurring pattern establishes something of a track record that Bruce Wayne is never allowed to be happy with Selina, at least not for very long. Every time that he has especially married Selina and had Helena as his daughter, they all either died violent deaths or were retconned out of existence. The Crisis reboot accomplished both scenarios, and the New 52 timeline resulted in both Bruce and Selina having their lives violently cut short.

The New 52 Helena Wayne was subsequently a repeat victim of one traumatic experience after another. First with the violent deaths of her parents during the first Apokolips invasion, followed by becoming a victim of body horror and torture during the second Apokolips invasion. She couldn't even settle on a new planet without having her face mutilated, resulting in a horrific, prominent scar all across her face. There's also the part about her world ending twice, resulting in her living on three different Earth-2s. At some point, you find yourself asking "who the hell hates Helena Wayne this damn much that she never catches a break?" In all likelihood, all arrows seem to be pointing towards Dr. Manhattan or even Mr. Oz. But where does this leave the original pre-Crisis Helena Wayne in the Rebirth universe? That is one of the questions that remains to be answered.

I am pretty convinced at this point that we can expect to see the classic Helena Wayne Huntress resurface sometime in the future. Maybe not right away, but I'm pretty sure it's on the horizon if we're already seeing glimpses of the people who are important to her like the pre-Crisis Earth-2 Dick Grayson, her father, and even the pre-Crisis Earth-2 Superman. I don't think any of these characters are surfacing by accident, so I'm pretty sure a proper return of Helena Wayne is at least being considered. It wouldn't make sense to leave her out when she is a very visible remnant of DC's Golden Age history, a very well known member of the Justice Society and Batman family, not to mention she's a very popular character with fans.

The other question that's pending an answer is "how will the classic Helena Wayne Huntress return to the mainstream continuity?" Will she be a refugee of the pre-Crisis Earth-2 just like Power Girl was pre-Flashpoint? Or will her character history be integrated into the mainstream Batman family similar to what's being done to Superman now? Will she be retroactively reinstated as the long lost daughter of the Prime Earth versions of Bruce Wayne and Selina Kyle? Will this result in their marriage from the Golden Age continuity being reinstated and will Damian Wayne gain an older sister?

There are plenty of ways the classic Helena Wayne Huntress can be reinstated to the mainstream DC timeline--I only named two. It's really a matter of DC deciding where they want to go from here. Will they ultimately rebirth their original multiverse and only modernise the histories of these characters to keep them relevant? Or will they simply merge all of the timelines of DC's past continuities so that there is only one Bruce Wayne, one Selina Kyle, one Helena Wayne, one Dick Grayson, etc, all with histories that link back to their first appearances in the Golden Age with aspects of their Silver Age, Bronze Age, and modern histories grafted to them?
Posted by Diane Darcy at 20:29