Road to Justice Society Rebirth: What We Know So Far, Week 06 (Spoilers Ahead) 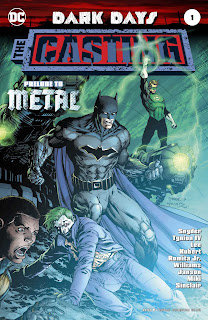 Last month, Dark Days: The Forge #1 planted some very exciting seeds for the upcoming Dark Knights: Metal event. The plot threads I am particularly interested in are the ones involving the Hawks--Carter and Shiera Hall--and Batman and Mr. Terrific. Unfortunately, we don't learn anything new from the Hawks that we hadn't already learned prior to Dark Days: The Casting, but it does appear to set them up for exploring the multiverse, which could possibly have them revisit their origins on Earth-2.

One particular detail of intrigue in this week's Dark Days: The Casting is that Carter mentions he and Shiera had not been set on the path of reincarnation by the dark priest Hath-Set using the cursed dagger made of Nth metal, which already changes one aspect of their history. Instead, the dark priest had stolen their past that started much earlier than their lives as Prince Khufu and Chay-Ara, which implies he isn't the more familiar Golden Age villain, but someone else. There is also mention of a "being beyond [their] understanding," which is the first potential clue to Dr. Manhattan in The Casting.

Another detail of intrigue is that the Joker is the third DC villain to be aware of the presence of another powerful mysterious being messing around with their timelines. The first two were Mr. Mxyzptlk and the Reverse-Flash. The Joker is also aware that someone is exploiting Batman's paranoia and obsessive tendencies to manipulate him into doing what they want him to do and they succeed. They successfully get Batman where they need him to be in order to trigger the events of next month's Dark Knights: Metal. There is also explicit acknowledgement that the origin of Bruce's Batman identity may not have been his idea, but rather had the idea purposely planted in him by that powerful being in the form of showing him a bat.

The last intriguing detail in Dark Days: The Casting is Wonder Woman mentioning her patron Gods abandoning the Earth and barring entrance to Olympus, seemingly in fear of another powerful being with the power to reshape the Earth and the cosmos, again implying Dr. Manhattan. This is also the second time that an upcoming Crisis is mentioned, not just by Wonder Woman, but also Talia Al Ghul who is also preparing for war with this "being" along with her father. 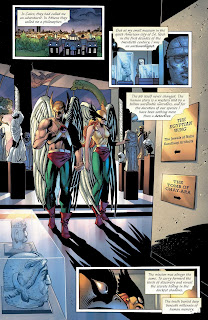 Exactly where all of this is leading is hard to say, especially where the Justice Society is concerned. What we know so far from The Flash, Dark Days, and "The Button" crossover is that much of Prime Earth's pre-Crisis Earth-1 history is starting to be restored. Where it gets complicated is where the Justice Society is going to fit into the larger narrative of Rebirth because their place in the DC Universe isn't as clear cut. In fact, their own timeline is kind of all over the multiversal map.

As is known to all Justice Society fans, the classic superhero team was never historically a part of the Earth-1 continuity and were only integrated to the Earth-1 timeline after the events of Crisis on Infinite Earths in 1986. Before that, they existed on their own separate Earth, complete with their own continuity that started with Superman's Golden Age appearance in 1938.

Where they are now is hard to say because newer, younger versions of the Justice Society characters are currently existing in a newer incarnation of Earth-2 on the multiversal map (which is still in continuity) and the classic versions that originated on the pre-Crisis Earth-2 appear to be stranded on Prime Earth. Where my brain gets scrambled is in thinking about "what's going to come out of all this?" Will the new Earth-2 turn out to be a divergent timeline of the pre-Crisis original resulting in the two different versions of the Justice Society characters we have now? If so, what will be the end game?

Will Rebirth result in the merging of the New 52 Earth-2 and the pre-Crisis original, resulting in yet a fourth incarnation of Earth-2 that merges both histories and characters into one ala "Superman Reborn?" Will Rebirth accomplish the original goal of Crisis on Infinite Earths by more successfully merging all of DC's history, characters, and divergent timelines into one single Prime Earth continuity, resulting in a massive rebirth of the DC Universe all around? Or will the major rebirth here be a restoration of the pre-Crisis multiverse effectively restoring all of DC's history, but slightly tweaked and modernised to move DC to the future? 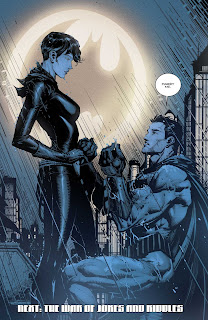 Based on what we know so far, it can go in any direction. That's how big the larger mystery of Rebirth is and how complicated DC continuity has gotten as a consequence of hard reboots and every attempt since to fix those reboots. Right now, the books I'll be paying attention to for unearthing all the clues and mysteries of Rebirth are Action Comics, Batman, Detective Comics, The Flash, Nightwing, and Dark Knights: Metal.

Action Comics will finally start to address the mysterious Mr. Oz who has been capturing and imprisoning various DC universe characters, while Detective Comics will possibly show us the other residents of Mr. Oz' dimensional prison through the eyes of Tim Drake. This could be our chance to find out if any of our favourite Earth-2 and Justice Society characters have been held prisoner by the Oz man himself, and the reason for their absence in the DC universe. One of the prisoners being teased on the cover of Detective Comics #967 is a gun-toting Batman--a trait more associated with the Golden Age version of the character from the pre-Crisis Earth-2.

In Batman, the Prime Earth Bruce Wayne has proposed to Selina Kyle and started remembering his Golden Age past with her. This could potentially trigger the reappearance of the classic Helena Wayne Huntress who is the daughter of the Golden Age originals, and possibly even the Earth-2 Dick Grayson. On the latter character, we might see the pre-Crisis Earth-2 Dick Grayson again in the Dark Knights: Metal tie-in issue of Nightwing #29 in September. The character was already teased during the "Nightwing Must Die" story arc and a multiversal Dick Grayson is once again being teased for the Dark Knights: Metal event.

The Flash is picking up the threads from "The Button" crossover, namely in the form of restoring Barry Allen's pre-Crisis Earth-1 history, but we might also see the return of our favourite Golden Age speedster, Jay Garrick, in the near future. He and Jesse Quick are two of the Flashes explicitly shown in the 25th Century Flash museum and they are the speedsters more heavily tied to DC's Golden Age history.

One possible maybe is Blue Beetle, which features Kent Nelson's Doctor Fate in a supporting role, but the story so far is less about him and more about him helping Jaime reclaim control of the scarab. At best, the conclusion of this story might point us in the direction of where Kent will go next.

Until next time!
Posted by Diane Darcy at 10:10