The Best of the Huntress: Wonder Woman #306 Review 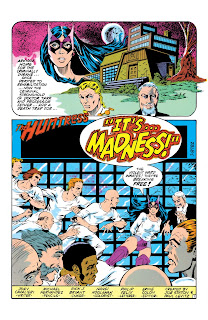 Summary: The violent ward of Arkham Asylum has broken free and they're out for blood...but not the blood of the Gotham authorities. Instead, they're after the people who placed them there: Dr. Tarr and Prof. Fether! As the Huntress learns the dark details of Tarr and Fether's sinister operation at Arkham, Police Commissioner O'Hara is being pressured by the citizens of Gotham to take action against the Huntress, following allegations of murder by reporter Nedra Borrower!

Review: We reach the penultimate chapter of the Arkham Asylum story arc, and well...this is the one story arc of Joey Cavalieri's run where the Huntress is given very little do. For most of this chapter she bears witness to the patient rebellion inside the ward, is once again assaulted by Milo, is eventually rescued by one of the patients, and eventually makes her escape. For most of this chapter, Helena Wayne doesn't really have much in the way of agency and functions more in a spectator role. As such, there isn't much to write home about as far as her character development is concerned. We won't see the focus shift back to her until Wonder Woman #307 where we see the effects of the hallucinogenic drug she was shot with in the previous chapter.

I would say this chapter does a lot "seed planting" for upcoming story arcs. One important plot point from the last chapter that's picked up here is the one concerning reporter Nedra Borrower riling up Gotham citizens into protesting the activities of the Huntress. In the previous chapter, they were putting pressure on Gotham DA Harry Sims to take action against her, which put him in a tight spot since Helena is still his girlfriend. In this chapter they are putting that same pressure on Police Commissioner O'Hara, who also has a working relationship with the Huntress. Just like Harry, he also feels conflicted about how to respond to the issue, but knows that he has to respond. This will be a central conflict for both men in later chapters. 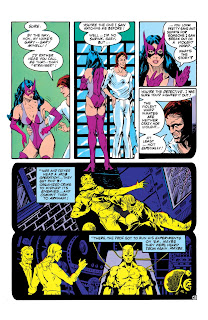 One character that is introduced in this chapter that will later have a recurring role in Helena's story is a young police officer named Gary Minelli. He is one of the "patients" from the violent ward who was captured earlier in his timeline by Tarr and Fether and he is the patient that releases Helena from her straightjacket. It is also established in his first appearance that he is attracted to Helena, but Helena doesn't seem to be aware of this, probably because she spends more time prioritising escaping from Arkham.

The one character I continue to be uncomfortable with in this chapter is Milo, who is once again characterised in a highly stereotyped way, very much to the point of being a dangerous caricature of a black man. At best, he's once again given agency in this chapter like in the previous one, but his characterisation isn't what I would call an improvement. His characterisation is still one-dimensional (even by pre-Crisis standards) and does little else in the story other than to repeatedly assault Helena. Fortunately, this is the last time we see him in Cavalieri's run.

Story-wise, there isn't much to say on this front either. It's more or less just "concluding" the Arkham side of the story, but doesn't serve much of a point or purpose other than to provide context for Helena Wayne hallucinating in the next chapter. Beyond diving into Helena's head, it does a lot of setting up for upcoming story arcs involving Nedra Borrower in particular. As such, this is probably the weakest story of Cavalieri's run because nothing of real consequence happens here. At least nothing involving the Arkham story in itself.