Road to Justice Society Rebirth: What We Know So Far, Week 07 (Spoilers Ahead) 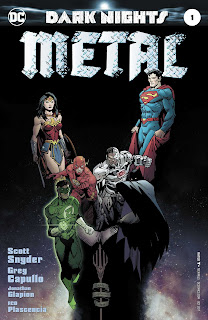 Picking up where Dark Days: The Casting #1 left off last month, Dark Nights: Metal #1 begins to show the consequences of Bruce Wayne opening a portal to the dark multiverse.

Once again, not a whole lot is revealed in this first issue regarding the Justice Society that we didn't know already. However, opening that portal to the dark multiverse does draw the attention of some of DC's magic-based characters such as the Justice Society's Doctor Fate and Vertigo's Dream of the Endless. Another group of characters the dark multiverse attracts are the Blackhawks, whose leader--Lady Blackhawk--is revealed to be former Hawkgirl, Kendra Saunders.

This is a very significant reveal because this marks the first appearance of the Prime Earth version of Kendra, who looks exactly like her New 52 Earth-2 counterpart, but with her original history with Carter and Shiera Hall restored. Another reason this reveal is significant is because the Prime Earth Kendra is aware of the existence of the multiverse, including the dark multiverse.

The multiverse that Kendra is aware of, however, is not the original infinite multiverse that existed prior to the events of Crisis on Infinite Earths. Instead, we are reintroduced to the one that appeared after the events of Infinite Crisis, complete with the set number of 52 Earths. The one detail that especially stood out to me is the part where Kendra described this multiverse as a tiny bubble floating inside a much bigger bubble (the dark realm in this case), implying that it may not even be the real one.

What could this possibly mean? 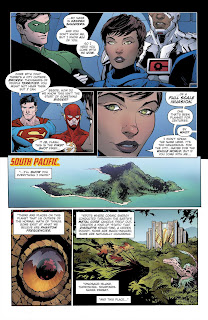 Well, within the larger context of the Rebirth narrative, we know that Dr. Manhattan has been playing around with the individual timelines of each of the Prime Earth characters in some capacity. Is he also inside this dark realm playing around with the 52 Earths Alexander Luthor created in the events of Infinite Crisis? After all, the Earth-2 that exists on the New 52 multiverse map is not the same one that we visited in Geoff Johns' Justice Society of America run from 2007.

The version of Earth-2 we briefly visited in Johns' JSA run was in many ways an exact replica of the pre-Crisis original, complete with the same characters that populated the original Earth. It had a very 1980s aesthetic despite the story taking place in the present (according to Johns, anyway), and the characters continued to wear their original costumes. Only a few key details were changed from the pre-Crisis Earth-2, such as the death of Alfred Beagle and the circumstances surrounding Bruce Wayne's death.

The New 52 Earth-2 is a vastly different world in every capacity, complete with a new set of characters that didn't originally appear on the previous Earth-2. In fact, many of the original characters did not appear on the New 52 Earth-2 at all except for Alan Scott, Jay Garrick, Helena Wayne, and Kara Zor-L. Any other pre-Crisis characters that did appear (most notably in Earth-2: World's End) had nothing in common with their original counterparts, except for their names.

Is this Earth-2 still the same one we saw in Geoff Johns 2007 JSA run? Is it one of the 52 Earths Doctor Manhattan tampered with, resulting in a vastly different history and a new set of characters? Is this tiny multiverse Doctor Manhattan's creation? Did he manipulate Alexander Luthor into triggering its existence? Is it even a real multiverse if the dimension on the other side of it is a dark multiverse? Could it possibly even be a simulation of a multiverse if the New 52 Earth-2 was able to "reset" itself? 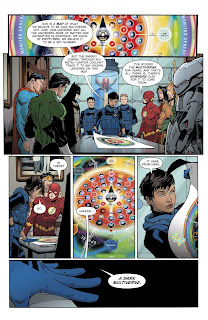 So far there is no implication that the 52 Earths are a simulation outside of Earth-2, but there is plenty evidence to suggest this tiny multiverse is an experiment of Doctor Manhattan's somehow. The new details about its existence do create more questions rather than answers, especially if it's in any way tied to the events of Infinite Crisis.

If the tiny multiverse is revealed to be an experiment of Doctor Manhattan, where does this leave the real multiverse? Is it still out there if the events from Convergence are still in continuity? If Crisis still happened somehow, can we expect the original versions of characters who disappeared with Crisis like Helena Wayne to resurface on Prime Earth? Will Helena Wayne be revealed as a prisoner of Mr. Oz' prison? Will it take the marriage of the Prime Earth versions of Batman and Catwoman to trigger Helena's reappearance?

There's a lot about the new DC continuity I don't understand right now, especially since pre-Flashpoint history isn't actually being reinstated. What I'm observing instead is pre-Flashpoint concepts being transplanted onto the New 52 continuity as a way of restoring what made DC interesting without doing another wholesale reboot. The histories of existing characters are still being rewritten in different but familiar ways, and not a whole lot is being hinted at where any of this is going. At best, this appears to be one of three stories leading to Doomsday Clock, with "The Oz Effect" and "A Lonely Place of Living" being the other two stories to pay attention to.

Until next time!
Posted by Diane Darcy at 17:11