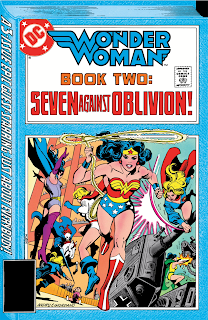 Summary: Following Wonder Woman and Zatanna's battle with Famine in Calcutta, India, the two women return to Washington DC where they meet with Pulitzer-winning journalist, Lois Lane, for a brief interview. Following the assault on Calcutta, Lois suspects the remaining three Horsemen of the Apocalypse won't be far behind and wants to know if Earth-1 should prepare for their arrival. Wonder Woman declines to comment further on the matter as a precaution against causing mass panic, which could potentially make the threat of the Adjudicator even worse.

On Earth-2, Black Canary solicits the help of Huntress and Power Girl of the Justice Society to fend off the remaining three Four Horsemen of the Apocalypse. Together they take on Plague who arrives in the Atlanta City of Earth-2's Georgia. The trio of women are able to stop Plague from causing further damage, but not without Power Girl getting sick in the process. Back on Earth-1, civilian Linda Danvers finds herself on the doorstep of Madame Xanadu at Wonder Woman's suggestion. The latter quickly deduces that the former is really Supergirl, and together they are transported to Earth-X where they assist the Phantom Lady in taking down the third Horseman known as War. Once again, the heroines are successful, but the danger isn't over yet. They still have Death--the last Horseman--to deal with!

Review: Part 01 of this crossover introduced us to the main villain of the alien Adjudicator and his own manifestations of the Four Horsemen of the Apocalypse. Part 01 had Wonder Woman and Zatanna take on Famine, which immediately led to Part 02 of this crossover that saw DC's other heroines take on Plague and War. For the most part, Wonder Woman isn't present in this story past the opening scene, which would normally be unusual for the title heroine not to be present in her own book. However, her absence isn't really felt here because this chapter picks up right where the last one left off and the majority of this story takes place in the DC multiverse. 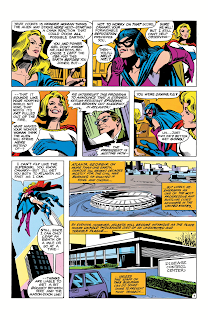 While Earth-2 has the Golden Age Wonder Woman as a resident and it would've been interesting to see how this version of the character would've handled things differently from her younger Earth-1 counterpart, I also understand why writers Paul Levitz and Roy Thomas didn't go in this direction. More than this is a Wonder Woman-centric story, this is really more of a Justice League/Justice Society style crossover with the focus being on DC's superheroines rather than the full members of both teams, which are overwhelmingly male.

For the most part, the story itself is well executed. The sequence of events are very well organised and the teams are nicely split up. Wonder Woman and Zatanna were the team that took on Famine on Earth-1 with Lois Lane appearing briefly for the aftermath, while Black Canary, Huntress, and Power Girl tackled Plague on Earth-2. I equally enjoyed the team-up between Supergirl, Madame Xanadu, and Phantom Lady for their fight against War on Earth-X. I liked that there were at least three heroines present to take on the first three Horsemen, which kept up an interesting continuity of "three" for these first two parts. Whether or not this is accidental or intentional can be debated, but I'm always of the opinion that no creative choice in a work of art is ever accidental.

Another thing that is great about this second part that kept in continuity with the first part is how each of the heroines dealt with their own challenge. Just like in the first part, the other two Horsemen appeared on the other two Earths mostly without warning and all of the heroines were made to quickly respond to the situation. This meant that they had zero preparation time, which also meant they had to be fast thinkers and quickly strategise. This added to the peril of the situation and also made the threat of the Adjudicator feel more real for the affected heroines because they had no choice but to improvise and still work together as a team somehow. It really doesn't get any more complicated than that!

On the front of characterisation, for the most part, Levitz and Thomas are able to write these heroines well in coordination with each other in the face of danger. Where they were "hit and miss," however, was mostly in the individual characterisations of each heroine. 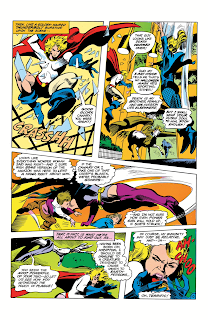 Starting with the opening sequence between Lois Lane and Wonder Woman, both Levitz and Thomas get that Lois is a passionate journalist who will always pursue the bigger stories, and they also get she feels it's her responsibility to keep the public informed of any dangers to their lives. Where they miss the mark is in later presenting Lois as prioritising "having the bigger story" over the safety of citizens, which is not in character for Lois. At best, she will continue to pursue the truth at all costs and present that story in its most authentic form to the public, but never at the expense of citizens' safety. She does know when she needs to restrain herself.

On a similar note, Levitz and Thomas' characterisation of Wonder Woman is equally hit and miss. On the one hand, they both get that Diana will always prioritise the safety of citizens and will take any necessary precautions to avoid making an already dangerous situation even worse. That part is not in question. What is in question is Diana's distrust of Lois in particular, especially since Diana should know Lois better than how she's presented here. Obviously, Diana wouldn't know Lois as intimately as Superman does, but she would know from Lois' track record as a journalist that she does know restraint where citizen safety is concerned. She should therefore be able to trust Lois with important information and trust that Lois will do her part without risking world-wide panic. Given Diana's characterisation here, Lois' comments about Diana not trusting her comes off as ironic.

Two more characters that are given hit and miss characterisation are Huntress and Power Girl in the Earth-2 sequence. Out of the two, Power Girl is the character who suffers the most. At best, Thomas and Levitz get that Power Girl is snarky and very vocal about how she feels about things. She doesn't keep her opinions to herself and doesn't care about whom she offends in the process. This is most notable in the scene where she expresses taking issue with hearing her world being referred to as "Earth-2," implying that it is somehow "second best." The part that validates her thoughts on this is the fact that her help is being solicited for an attack taking place on Earth-1. However, these character traits are not so much being used in her favour as much as they are being used to humiliate her.

The first time that this occurs is in the scene where Huntress and Power Girl meet with Black Canary at JSA headquarters in Civic City to be informed about the Adjudicator's upcoming attack on Earth-2. Power Girl wants to snark on the fact that they are being solicited to help out with a fight originally taking place on Earth-1 before a TV bulletin confirms Black Canary's story, effectively "putting" Kara in her place for daring to challenge the threat. It's obvious that this is being done for comedic effect, but with Kara being the punchline of the joke, it honestly comes off as spiteful rather than funny. 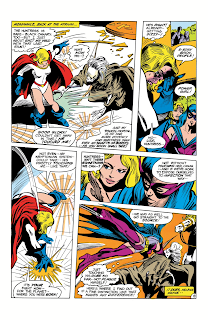 The second time Power Girl is humiliated as part of the punchline of a joke occurs in the scene where all three heroines battle Plague in Atlanta City. Power Girl is the heroine that's immediately taken out of commission during the fight when she is made sick by Plague. In the first bout of sickness that she experiences, Huntress briefly pokes fun at her situation, which doesn't feel in character for Helena to do this to her own best friend. After this, Kara is completely weakened, leaving Huntress and Black Canary to fight Plague by themselves. I get that the idea here was to use Power Girl to demonstrate the magnitude of Plague's potency without killing anyone. However, it's also an idea that would've worked better if Kara had been afforded agency in her own fight against Plague instead of using her as a punchline again in this sequence, which again comes off as spiteful.

On Helena's side of the Earth-2 sequence, she is admittedly better characterised minus the scenes where she either invalidates or humiliates Kara. When she's not being written out of character in her scenes with Kara, Helena is actually characterised as meticulous and quick-thinking. Even though she is thrown into a dangerous situation unprepared, she still evaluates the scene and impending dangers before making any risky decisions. This skill is best demonstrated in her fight against Plague himself when Power Girl is down. Helena knows that any direct contact with Plague can easily kill her, so she tries to minimise her contact with him as much as possible. She also knows that if he doesn't find some way to stall him, she risks getting everyone else sick. Helena then tasks herself with slowing down Plague long enough for Black Canary to disable him with her Canary Cry, which is quick thinking on her part.

I would say the one sequence where all of the women are better characterised is in the Supergirl and Xanadu sequence. While Supergirl is depicted as being reserved around Madame Xanadu instinctively as a protective measure for herself, neither she nor Madame Xanadu are depicted as antagonistic towards each other, nor behaving stupidly in a dangerous situation. They work quickly together to fend off War on Earth-X and quickly return to Earth-1 to resume their lives. The only thing that felt odd here was seeing Supergirl later depicted as wanting to forget the whole battle on Earth-X with the implication that it was not really "her problem." While the battle on Earth-X definitely had no direct repercussions for her, she is still not the type to brush off problems that don't directly affect her as that goes against the raison d'être of her superhero identity. As far as she is concerned, every problem is her problem, or she wouldn't be worthy of wearing her family symbol.

Taken as a whole, Part 02 does a great job at further developing the story that was originally established in Part 01, with the strong focus on DC's women as the problem solvers being the major high point. While there is an attempt to characterise all of these women as complex individuals and not as caricatures of women, both Paul Levitz and Roy Thomas struggle to do this effectively, most notably with Huntress, Power Girl, Wonder Woman, and Lois Lane. Out of those four, Lois and Kara suffer the most on the front of characterisation as a way of elevating Diana and Helena respectively. Having contrasting personalities is always a good thing to have in a story, but it also requires skill to execute well, especially when the gender of the characters don't match those of their writers, which risks stereotyping. Hopefully both Levitz and Thomas do better on this front in Part 03 next week!