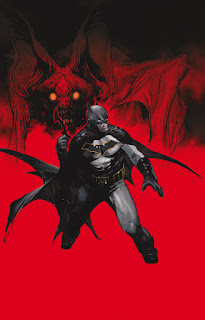 Collectively, today is the day that's celebrated as the start of the spiritual new year for pagan practitioners. It is the day known as Samhain. For members of mainstream society who go out on this same day dressed in a costume either to pull pranks on their neighbours or take their kids out to collect candy, this day is known as All Hallows Eve, or simply Halloween.

Wait...what does this have to do with Helena Wayne? Well, nothing yet. But since we are talking about realms and things that go bump in the night, I figured now would be a great time to talk about the Dark Nights: Metal tie-in Batman Lost set to come out on the 8th of November. Since Metal writer Scott Snyder is a huge fan of horror (not to mention is himself a writer of horror), it looks like we can expect to see some spooky things in the pages of Batman Lost, including--apparently--a ghoulish Helena Wayne. Let's talk about what we know so far!

From the preview pages available, we can clearly expect to see the Golden Age Batman as he originally appeared in the 1939 issues of Detective Comics. Whether or not this will be the Prime Earth Bruce Wayne reliving his previous life in the Golden Age or the actual pre-Crisis Earth-2 Batman, we'll have to read the story to find out. But one character that Snyder has been teasing a lot on his twitter is a mysterious little girl who is apparently significant. Who exactly is she and why is she important?

When Snyder originally teased the little girl on his twitter prior to NYCC, many fans quickly assumed the character was Helena Wayne. My own knee-jerk reaction was "granddaughter" because the Bruce Wayne that appears in the panels with the girl in Snyder's story is much older than the age Earth-2 Bruce was when his daughter Helena was born. In pre-Crisis canon, Bruce was 40 when he married Selina Kyle and he was 42 when Selina gave birth to Helena. By the time Bruce was in his 60s (and he appears to be in his 60s in the preview pages), Helena was already an adult woman by then. So could the girl in the preview still be Helena? Well let's examine the evidence.

So far, Snyder has only been teasing the Golden Age Batman and the pages with old Bruce and the little girl. These are also the pages that were previewed at NYCC earlier this month. It's highly unlikely that Snyder would be teasing the little girl and the Golden Age Batman this heavily if the two things aren't somehow significant. Golden Age Bruce is obviously a nod to the character's past, but why does Snyder want us to pay attention to the little girl? If Snyder is especially revisiting Bruce's Golden Age history, then it absolutely does make sense that he would revisit the one character that is unique to this version: his daughter, Helena.

Now obviously, I am not expecting the little girl to be the original pre-Crisis Helena if she does turn out to be a version of Helena. This is, after all, the Dark Multiverse. I expect things to be a darker, more distorted version of reality than the normal multiverse. But it does gives us something to ponder for the future. Could we see a reinstatement of the original Earth-2 Batman family as they existed in the pre-Crisis era? Or could Snyder be planting seeds for Tom King's own run on Batman? I guess we'll have to keep reading to find out!

In the meantime, have a look at the preview art from Batman Lost and decide for yourself if the girl is Helena or a multiversal hell spawn! (Either that or go scare people dressed as Barbatos...)