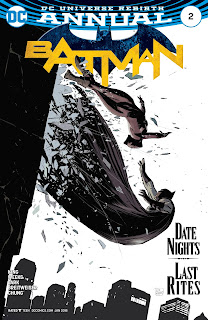 Let me start by saying that first and foremost, Batman Annual #2 is a Batman and Catwoman story. Without revealing too much, the Annual shows an episode of the couple's past (their first dates) as well as their potential future as an elderly couple in a similar vein to Alan Brennert's Brave and the Bold #197 story "The Autobiography of Bruce Wayne." The Prime Earth Helena Wayne only appears in a cameo for a page or two, namely to comfort her mother, and those pages even reveal her future superhero identity. (More on that in a bit.)

I don't want to jump to conclusions this early on in the game, in part because we don't know what DC's plans are for Helena Wayne and in part because Geoff Johns is still course-correcting the DC Universe with Doomsday Clock. The future is still very much in the air at this time and plans can change between now and then. As such, nothing is set in stone, including the elderly Bruce and Selina from today's story, though I very much want it to stay in continuity. I do want the elderly Bruce and Selina to stick around for Helena to interact with since we were robbed of that both pre-Crisis and during the New 52. Letting her parents live this time would be a significant improvement. But what do I personally want for Helena as her fan?

I must admit, I still want the pre-Crisis Helena Wayne back as the Huntress with the classic Justice Society. I especially want to see her reunited with Power Girl since I don't want Kara to be the sole refugee of Earth-2 again like she was post-Crisis. That premise made Power Girl's story too sad and tragic in my opinion, and I've been wanting to see that Huntress and Power Girl reunion story since Geoff Johns' and Jerry Ordway's Justice Society of America Annual #1 from 2008.

But--for the sake of argument--let's say that a return of the pre-Crisis Helena Wayne is not in the cards for DC's Rebirth Universe, and Geoff Johns wants to fully integrate her as a native of Prime Earth like the Justice Society. I still feel that Helena needs to be brought back in a way that stays true to the core concept of her character and leaves most of her original developments intact. For me, this entails doing a story similar to this year's "Superman Reborn" instead of rebooting her character entirely from scratch. (Again.)

What is Helena Wayne's core concept as a character? I narrowed it down to five main things: 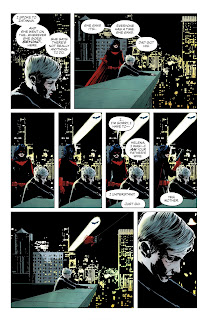 Out of those five, it seems only the first item has been checked off at DC, and the other four are still pending. However, today's Batman Annual #2 teased Helena as a future Batwoman, complete with Kate Kane's costume. It is not known if she still starts out as the Huntress in this continuity and later becomes Batwoman (kind of similar to how her New 52 Earth-2 doppelgänger ended up), or if DC is in fact planning on having her takeover the Batwoman identity from the go. Let's talk about that.

I'll be perfectly honest and admit I really don't like the idea of Helena Wayne becoming Batwoman (or even Batman for that matter) for two reasons. First, it erases the fact that she is the original Huntress, which takes away one idea that makes her interesting as a character. To me, erasing Helena Wayne as the original Huntress is the same as erasing Jay Garrick as the original Flash because it changes the history of the moniker in a very fundamental way. The second reason I dislike the idea is that it profoundly misses the point of why the Huntress identity is so important to her character.

As much as I disliked seeing Selina Kyle fridged as a way of catapulting Helena into her superhero identity, I always loved the fact that her Huntress moniker was always an homage to her mother's Catwoman identity. That's a very significant development because it's incredibly rare to see a woman (especially the mother) treated as the most important character in a hero's origin story. The default is always the father figure, which means keeping Selina as the main inspiration for Helena's Huntress identity keeps her origin unique. It is also a development that doesn't require killing Selina because Helena would've still been inspired to become a superhero on her parents' legacy alone. Making her Batwoman shifts her identity back to her father as the most important figure, which now makes her story less interesting.

The other reason Helena's original Huntress identity is important is because it allows her to honour the legacy of her parents while at the same time allowing her to create her own legacy. This was especially reflected in the design of her Huntress costume that had a dominant purple motif (from her mother's Catwoman suit) with grey, blue, or black as the other dominant colours (from her father's Batman suit). The idea of the Huntress being a way for Helena to honour her heritage while allowing her to forge her own unique identity was a development that was heavily emphasised pre-Crisis with good reason. The point of her family legacy was never "who should become the next Batman or Catwoman," but rather "how does Batman and Catwoman inspire their own daughter to continue their work?"

Given that very significant history, the Huntress is very much a fixed part of Helena's identity in the same way that Batman and Catwoman are to Bruce and Selina. Taking that away from her is equivalent to needlessly amputating a healthy leg, leaving her only one leg to stand on. Sure, everything else about her is still there, but a huge chunk of her identity is now missing in a way that doesn't improve her story, but rather takes away from it. If part of the promise of Rebirth is to restore DC characters to their more classic, recognisable forms, then keeping Helena Wayne as the original Huntress is absolutely crucial. Even if DC now has to find a way to still tie Helena Bertinelli to that identity somehow without erasing her own unique history, the point is Wayne still needs to be the first heroine to own that identity. (Bertinelli--after all--still owes her existence to Wayne in the same way that Barry Allen owes his to Jay Garrick.)

Again, I want to emphasise that today's Batman Annual only provided a tease of where Helena Wayne's story can potentially go in the future, which means nothing is set in stone. But if DC is committed giving Helena Wayne her due this time, she absolutely does need to originate the Huntress identity. That actually belongs to her. Making her Batwoman is a complete wrong direction to take her in and would be continuing the long-standing problem of erasing and needlessly convoluting her actual history. The goal here should be to stop changing the character in order to accommodate two bad reboots that set out to erase her (Crisis and Flashpoint in this case). The goal here should be to give back to Helena Wayne what was taken from her.
Posted by Diane Darcy at 18:59