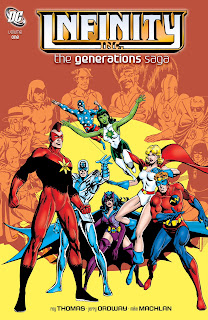 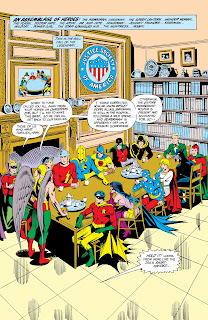 By this point, Helena Wayne had been written by three primary writers: Paul Levitz, Gerry Conway, and Joey Cavalieri. By the creation of Infinity Inc in 1984, Helena acquired one more regular writer, Roy Thomas, who was very much the expert on DC's entire Golden Age continuity during the Bronze Age era of DC.

Though Paul Levitz and Gerry Conway were mostly responsible for modernising the Justice Society team for a newer generation of readers in the 1970s and early 1980s, it was Roy Thomas who further expanded upon DC's Golden Age history itself. Not only did Thomas revive many more forgotten heroes from DC's Golden Age era and told new stories with these characters in a brand new series called All-Star Squadron in the early 1980s, but he was also responsible for creating many more Golden Age legacy heroes, and this is where Infinity Inc mostly comes in.

The whole idea behind Infinity Inc was to essentially have an Earth-2 version of the Earth-1 Teen Titans. Unlike the Titans, however, none of the Infinitors started out as sidekicks to an adult superhero who then got together to form their own team. Instead they were the children or direct descendants of DC's Golden Age superheroes, many of whom were members of the Justice Society.


1. THE LEGACY OF THE JUSTICE SOCIETY 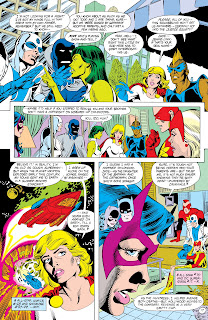 Before the creation of Infinity Inc, Robin, Huntress, and Power Girl were the only known legacy heroes on Earth-2 who were also the younger members of the Justice Society. Robin was the direct successor of Batman, Huntress was the daughter and successor of Batman and Catwoman, and Power Girl was the cousin and successor of Superman. The only other young hero present on the team was Sylvester Pemberton (the Star Spangled Kid), who wasn't a legacy hero as much as a young time-displaced hero of the 1940s. He was therefore actually the same age as the older Justice Society members despite his youthful appearance.

To relieve Robin, Huntress, and Power Girl of being the only legacy heroes on Earth-2, Infinity Inc writer Roy Thomas created a whole new group of characters to fulfil this role. Among the characters he created and introduced in the new series included Lyta Trevor as Fury, who was the daughter of the Golden Age Wonder Woman and Steve Trevor. Her boyfriend, Hector Hall (aka the Silver Scarab) was the son of Carter and Shiera Hall, who were also the Golden Age versions of Hawkman and Hawkgirl respectively.

Accompanying the two new heroes were Albert Rothstein as Nuklon, who was established as the godson of the Golden Age Atom, Al Pratt, and Norda Cantrell (aka Northwind) who was the son of Fred Cantrell, a friend of Carter and Shiera Hall. The last two young heroes to join their group were the twins Jennifer-Lynn Hayden and Todd Rice, both of whom recently discovered they were the biological children of the Golden Age Green Lantern, Alan Scott.

Much of this volume of Infinity Inc: The Generations Saga is centred on these six characters not only confronting the legacies of their parents, but also looking to carve their own places in those legacies. Originally, they wanted to join the Justice Society in the same way that Robin, Huntress, and Power Girl did, but unlike the three, they were denied membership due to lack of experience. Robin had worked under the mentorship of Batman for a good two decades before officially joining the Justice Society, and the Huntress had at least acquired a year of experience working as a superhero before joining herself. Out of the three, only Power Girl had joined the team without any prior experience, and the one thing that worked to her advantage was her Kryptonian heritage and powers.

Despite being the children of DC's legendary Golden Age heroes, the Infinitors still did not have any of the advantages that their peers Robin, Huntress, and Power Girl possessed. Part of the reason for that was that their parents had mostly retired from their superhero lives prior to marrying and having children. The other reason was that the heroes themselves wanted their children to enjoy normal lives without any of the dangers that their superhero lifestyles often put them through. The Infinitors actually had that in common with the Huntress, but unlike the Huntress, none of them had pursued their superhero lifestyles prior to applying for Justice Society membership. 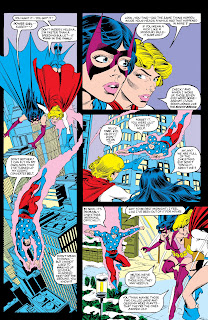 In addition to introducing a whole new group of characters to continue the legacies of the Justice Society heroes, another major theme that is explored in Infinity Inc: The Generations Saga is ageism mostly aimed at the younger generation. On top of denying membership to the younger heroes on the lack of experience (effectively denying them the opportunity to acquire experience), the older Justice Society heroes were also incredibly condescending towards those younger heroes.

The way Huntress and Power Girl relate to their own peers is quite interesting because despite being within the same age group, both women are much more experienced at being superheroes than the Infinitors. By their own respective timelines, they had already been operating as superheroes for eight years, almost a decade, and had already prevented various crises on their own Earth as well as on multiple other Earths.

Given what they've already experienced within that timeframe, Huntress and Power Girl are not at all on equal footing with their own peers, and this reflects in the way they interact with them. Though not nearly as condescending as their older Justice Society comrades, they still function like the older siblings to this new group deciding to tag along with them as a way of keeping an eye on them. They are eventually joined by Sylvester Pemberton who comes up with the idea of forming a new superhero team that he wants to personally fund as Infinity Inc.

He pitches the idea to the entire group--Huntress and Power Girl included--and all seem interested in the idea, but Huntress and Power Girl aren't really sure if they want to join. On the one hand, they would be working with heroes their own age, but on the other hand, they're the more experienced members of the group and don't seem all that interested in mentoring their new partners. It isn't until after they've embarked on their first mission with the Infinitors that they decide to return to the Justice Society, but accept honorary membership with the Infinity Inc group, effectively paralleling Batman and Superman's honorary membership into the Justice Society.
Posted by Diane Darcy at 00:00