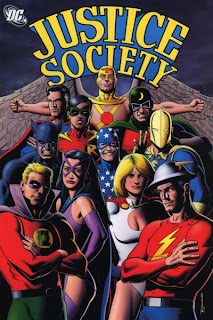 In addition to Huntress: Dark Knight Daughter (aka the definitive Helena Wayne Huntress book), another book I always recommend fans to check out that is regrettably also out of print is Justice Society Vol. 2.

Now, Justice Society Vol. 2 does more than just collect the first three years of Helena Wayne's adventures with the Justice Society. It also collects "The Death of Batman" story arc from Adventure Comics #461-463, which was considered back in 1979 to be a major event. It was not a storyline that sent off a version of the famous caped crusader, but the Golden Age original. This final farewell to the Batman that started it all in 1939 helped set his daughter up to take up his legacy full time and continue building on DC's Golden Age mythos.

Fortunately, in contrast with Dark Knight Daughter, you can buy all of the stories collected in Justice Society Vol. 2 on Comixology. The only downside is not all of the digital versions of these stories have been remastered like the trade with some simply being scanned in and others left in black and white. Still, the stories are worth a read and hopefully remastered versions become available soon.

As always, here are the Comixology links for the stories featured in Justice Society Vol. 2 listed in the same order as the trade.