The Best of the Huntress: Wonder Woman #313 Review 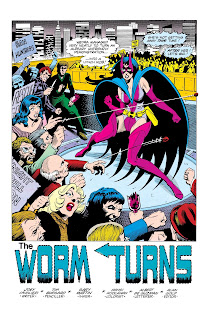 Summary: Nedra Borrower has succeeded in turning an already unfriendly demonstration into an angry lynch mob, but the Huntress is not about to become their punching bag, much less their retaliation kill. Making her escape she decides to take the fight to Nedra herself by investigating an aspiring politician she's been doing heavy coverage on. What Helena Wayne discovers next puts into perspective just how low her newest enemies sink as well as how closely they intertwine!

Review: This issue marks the conclusion of the Earthworm story arc, but it also ends with a teaser for a future return. One that sadly never ends up happening because of the Crisis on Infinite Earths reboot, which is gravely unfortunate. I really wanted to see where Joey Cavalieri would've taken this character next. Would Helena Wayne have eventually succeeded in capturing the Earthworm? We will sadly never know, unless I manage to ask Joey Cavalieri one day. 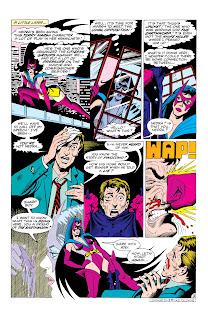 On the subject of the Earthworm, I liked how Joey Cavalieri kept him a mysterious villain for this entire story arc. All we know about him is that he is a human trafficker named Herbie who can sneak in and out of places unnoticed as his deformity keeps other people at bay.

Who is he really? Where does he come from? What disease gave him the appearance he has? These are all the questions that go unanswered, which keeps a reader intrigued.

As an adversary for the Huntress, given his lanky figure and his rather simple function as "the baby snatcher," he looks like an easy capture for the Huntress. However, in this story, he is shown to be more intelligent than he appears and takes advantage of distractions to silently make his exit.

The fact that he was able to frustrate the Huntress by slipping right through her fingers (almost literally here), shows that he had strong potential to be an arch enemy for the heroine, right up there with the Joker for Batman. In the same way that Helena Wayne relies on her intelligence and skills to do what she does, so does the Earthworm, which provides a more interesting challenge for the heroine who is not used to having cerebral villains. 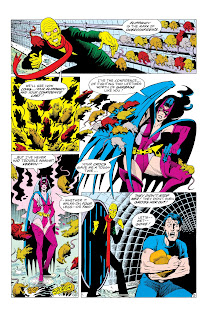 Another thing I enjoyed about this story's conclusion was the depiction of Helena Wayne herself. She was caught in the middle of a deadly media crossfire, and had to diffuse the situation as best as possible without losing composure.

Helena especially had to avoid feeding into the lies that were stoked by her two other adversaries: Nedra Borrower and her accomplice, Terry Marsh, who also turned out to be an accomplice of the Earthworm. In fact, it was kind of interesting how this whole scheme against the Huntress quickly nose-dived for all of the villains involved, barring the Earthworm who managed to escape capture.

How Helena Wayne herself will be impacted by this experience is yet to be seen. While she was very careful not to validate the lies Nedra stoked to make her case against her, she still used violent coercion to get Terry to speak out against his co-conspirators, which could still be used against her by mainstream media coverage. Things only get exciting from here!