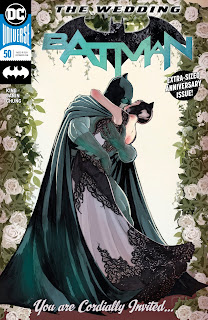 Summary: As Bruce Wayne and Selina Kyle prepare for their big wedding day, the couple ruminate about their past history together--from their very first meeting to their present--and think about whether or not this next step is the right future for them. Can they truly be happy together? Will their happiness cost Gotham their guardian Dark Knight? Is it a sacrifice worth making? These are all the thoughts that run through the young couple's minds as they make their way down the aisle.


Review: Today is the much anticipated wedding day, and New York Times spoilers aside, it is actually a well written issue. Though I won't detail what actually happens in the story, I will talk about the centre piece of this issue and my reaction to it so to speak. It won't be spoiler heavy, unless you consider discussing past continuity a spoiler.

Batman #50 isn't so much a story as much as a recap of Batman and Catwoman's history together as told from the points of view of each character, each offering their own perspective on each other as individuals. It does everything from acknowledge their very first appearance in Batman #1 from 1940 to their present. It doesn't acknowledge the reboots in between (namely Crisis on Infinite Earths and Flashpoint, the big game changers that caused significant changes to their respective histories), but it does revisit the more emotional beats of their journey together. 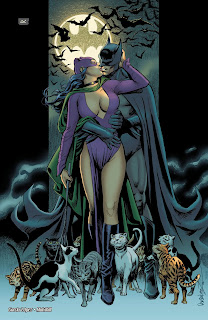 There are some references to the Golden Age history, but most of the history is centred on the historically Silver Age Earth-1 couple as they are the versions of the characters who stuck around the longest by surviving two reboots. By all accounts and purposes, this is really a recap of their history because the Golden Age couple already reached their natural conclusion before the Crisis reboot happened.

Whereas the Golden Age couple did show where a happily married Bruce and Selina could realistically be in their lives, and how their legacy could be carried on through their daughter (Helena Wayne as the Huntress) on the parallel world of Earth-2, the Silver Age couple on Earth-1 were never afforded that same luxury.

When the Silver Age versions of Bruce and Selina were rebooted in both the post-Crisis and post-Flashpoint continuities, a pattern kept recurring: every time Bruce and Selina reached peak relationship, or got close to that proverbial "next step" in their relationship, their histories would suddenly change. We saw this happen with both Crisis and Flashpoint. This was actually acknowledged in past issues of Tom King's Batman, most notably in Batman #44.

King's run has then sought to break that pattern by doing the one bold thing past continuities never did (Earth-2 notwithstanding): allowing these versions of the characters (the so-called "main versions") to actually have a next step. This is the idea that has defined the bulk of King's run in a way that made it stand out from past Batman runs. It started with a proposal in Batman #24 and took us on a journey to this point in Batman #50: the wedding itself. The question now is "was there really a change to status quo?" 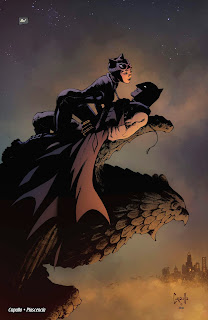 There is no point in dancing around the bush because the New York Times already spoiled the fact that Bruce and Selina don't end up marrying in this issue. What the New York Times did not talk about was the reason the wedding didn't happen. I won't spoil that detail here, but King was not joking when he said this was "the midway point" and the story ends with a "to be continued" meaning "there is more to come."

What I will say is that for an issue that was heavily promoted and marketed for a whole year as being "the historic milestone issue" and "the much anticipated Batrimony," it is wildly underwhelming because the story did not deliver on its promise of an actual wedding taking place.

As much as I enjoyed the recap of Bruce and Selina's relationship itself, the story unfortunately still did not live up to the hype because it didn't end with the surprise that was expected for this issue. That's what I feel is going to end up hurting the rest of King's run moving forward, no matter how beautifully heartfelt this issue was in terms of both writing and art. This is more an issue of false advertising than it is an issue of execution especially if the plan was never to marry them off right away, but build towards that moment.

Whether or not there will be a status quo change by issue #100 after Tom King has completed his journey for Bruce and Selina, only time will tell. But because DC really messed up on the marketing here and failed to deliver the product they promised, I'm not sure that it will make a difference at this point.

At best, I do hope it ends up surprising everyone in an unexpected way in the end, but I somehow feel there will be less guests at the wedding this time, if one ends up taking place at all. This was definitely a storyline that required way more thought in terms of marketing and promotion than creating empty hype that will end up costing retailers hundreds of dollars in lost sales.

One last thing I will add before I wrap this up is to check out Joëlle Jones' Catwoman #1 as it is in fact a good read despite the unfortunate circumstances surrounding the launch of her new series. Her book does deserve a chance since she does bring her best to the table in terms of writing and art.