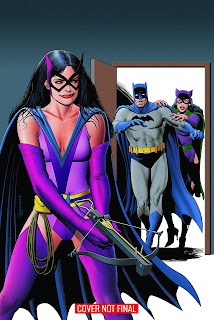 HUNTRESS: ORIGINS
written by PAUL LEVITZ
art by JOE STATON
The earliest stories of Huntress, one of the Gotham City heroes featured in the upcoming Warner Bros. film Birds of Prey and the Fantabulous Emancipation of One Harley Quinn, are collected in a new title. From the parallel world known in the DC Universe as Earth-2, the Huntress is a unique hero -- the daughter of a hero and a villain: Batman and Catwoman. Helena Wayne was trained by her parents to become a superb athlete, and studied law with the hope of bringing criminals to justice. But after Catwoman is killed by a blackmailer who tried to force her into returning to her life of crime, Helena dons a costume of her own. Now, with her crossbow as her chosen weapon, the Huntress vows to avenge her mother's death.

In anticipation for the upcoming WB film Birds of Prey and the Fantabulous Emancipation of One Harley Quinn in 2020, DC Comics will be re-releasing the Huntress: Dark Knight Daughter trade collection as Huntress: Origins in January of that same year. This is excellent news for Helena Wayne Huntress fans, both new and old!

While I don't think this is any indication that Helena Wayne will be appearing in the film (though I'll be happy to be proven wrong on that one), the upcoming Huntress: Origins trade will still be a good resource for new fans who want to get to know this version of the Huntress in her most authentic form. It will collect both her pre-Crisis origin from DC Super-Stars #17 and the entirety of Paul Levitz' run from 1977 to 1982.

Though I already have Huntress: Dark Knight Daughter, I'll still be adding this latest version to my collection! And who knows! If sales on this new Huntress collection flies through the roof, maybe this will finally entice DC Comics to release Joey Cavalieri's pre-Crisis Huntress run in a second volume! I know I would like this very much.