The Best of the Huntress: Wonder Woman #319 Review 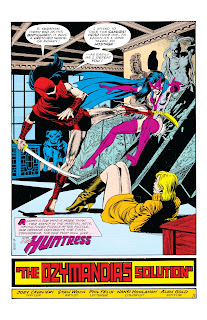 Summary: Helena Wayne has finally unmasked her friend Myra's killer, and is ready to give the Nightingale the long overdue fight they've been craving for. But a showdown with the Nightingale isn't the only thing on Helena Wayne's 'check off' list. She still has to resolve her case with Myra's art dealer, Mr. Seraphin, who may be even more shady than he appears to be! Just what exactly is the origin of the Japanese statue he wants to sell Helena, and is it authentic? If fake, did Myra lose her life for nothing?

Review: I admittedly struggled with this write-up for nearly two months, namely because I was struggling to figure out how to turn a swift conclusion into a lengthy in-depth discussion. Part of it was due to disappointment over how quickly the momentum of the last two issues petered by the conclusion despite a strong buildup. The other part of it was realising writer Joey Cavalieri didn't capitalise on the potential he built with the Nightingale as a formidable villain for the Huntress now that she was finally in costume. But before I address the cracks in the foundation, let's first talk about what I did enjoy about the finale. 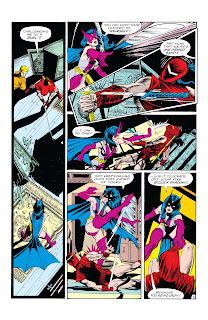 One of the things I've consistently enjoyed about this story was the way Joey Cavalieri depicted Helena Wayne's detective skills. For this story, he spent more time developing Helena as a detective resolving a murder case outside of costume, which was a very nice change of pace. It afforded the reader the opportunity to see how differently Helena operates when she's forced to look into a case as her civilian self instead of as the Huntress.

I especially loved the reveal that something as simple as Helena reading English poetry for fun (in this case, Ozymandias by Percy Bysshe Shelley) accidentally led to her resolving her case. It was fun to see that even when Helena is supposed to be 'resting', her mind is still very much working, which makes her very similar to her father, Bruce Wayne. Also, Helena pretending to be her own fan was kind of cute. Unfortunately...this is all I enjoyed about the finale. The rest of this review will now focus on where it all fell apart from me.

One of the problems I had with this finale was actually pointed out in the last review: Joey Cavalieri revealed the identity of Myra's assassin to the reader way too early. By the time Helena Wayne unmasked the Nightingale to reveal that it was Seiji Kato--the onnagata and the passenger both Helena and Myra interacted with on the train--it felt like a 'duh' moment that Helena should've realised sooner.

The way Cavalieri executed the reveal depicted Helena as not realising right away who the Nightingale was until a little bit later. At the start of this final chapter, Helena still believed the Nightingale was a woman. It wasn't until she threw a katana at the Nightingale that she realised right then and there that the 'woman' was really a man who was highly skilled at portraying women on stage. The execution if this felt a little bit clumsy. 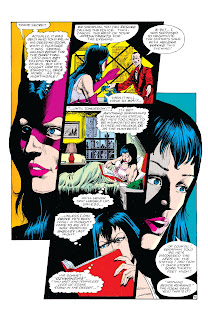 Another thing I was annoyed by was the lack of an actual, proper showdown between the Huntress and the Nightingale despite Helena actually being in costume this time. Compared to the first time that Helena fought the Nightingale, she had no reason to hold back this time and could actually fight Seiji at full capacity. The fact that she was able to take him down by just throwing a sword at him was pretty underwhelming compared to what we saw of their fight two chapters earlier.

I strongly felt that with Seiji Kato being a highly trained assassin, I definitely felt a proper fight should've taken place between him and Helena Wayne while she was in costume to juxtapose their earlier fight when she was out of costume. It would've been exciting to see how well these two people use their skills, especially with Seiji being stronger on fighting technique while Helena is more strategic in her fighting methods.

I strongly felt that a proper showdown would've resulted in Seiji realising that the Huntress was really Helena Wayne and that she was holding back earlier. That would've been way more interesting to see, especially since this would've most likely resulted in newfound respect for Helena by Seiji. He may not have liked her for thwarting his plans to regain possession of the Japanese statue, but he would've at least respected her as a fighter. Then there's the matter of Tracy Heather in this story.

Tracy Heather turned out to be an undercover police officer named Caroline Martin who was assigned to protect Myra Liebe from an assassination attempt. I felt like this detail needed a bit more development. Like how did the LAPD know that there would be a hit on Myra for being authorised to bid up to $1 Million USD on a samurai statue? Was it owned or being sold by the Yakuza? Did they know from the get-go that the statue was a fake and that Myra was actually being scammed? This actually gets into the final problem I had with the conclusion of this story:

Why the heck did Myra Liebe lose her life on a statue that turned out to be fake? 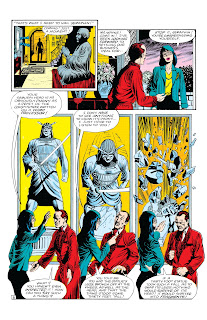 Everything about that reveal bothered me on multiple levels, beginning with the fact that it meant Myra lost her life over something that turned out to be valueless, and Helena was somehow not more upset about that. Then, when you get to Seiji's motivation for murdering Myra...how the heck did he not realise from the get-go that the statue Myra was about to be scammed into purchasing was a fake?

Given that he was depicted as being against the selling of Japanese relics because of their place in Japanese history and legacy--which is a very valid point--I would like to think he would know the history of the real statue itself and would be able to spot a fake miles away. The fact that he didn't means he wasn't all that bright, which in turn doesn't make him a very good warrior despite being a highly skilled fighter...at least technically. On that note, Caroline Martin's role in this was ultimately wasted.

When you get down to it, this was clearly a story that needed at least one more issue to conclude properly, especially since Joey Cavalieri wasn't able to wrap everything up in only eight pages. One more issue could've provided Joey Cavalieri with the space needed to better flesh out the origin of the statue and Caroline Martin's role in this story. Maybe instead of the statue turning out to be a fake, the statue could've been a real Japanese relic being sold to the American market by a Yakuza family. Maybe Seiji himself could've turned out to be the real owner of the statue and a member of another Yakuza family, which would at least given him a more believable motivation for his actions in this story.

Taken as whole, the story starts out strong, but ends in a dud. It continues to be one of my favourite stories for the way it depicts Helena Wayne as a meticulous detective, but the finale leaves a lot to be desired.