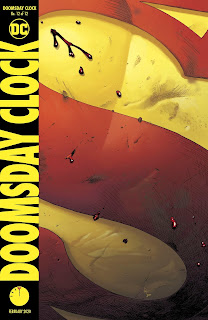 It's been a while since I've written about current events in the comics, and that was largely due to the fact I've been busy with other projects these past three months. Projects such as reviewing the 2002 Birds of Prey television series (which I concluded last month), and have finished recording episodes for the Straight out of Gallifrey Podcast, the Fire and Water Podcast, and we just wrapped up recording the first five episodes for Volume 02 of The Huntress Podcast that will launch first thing next year. (More news on this soon.)

But getting to the main topic at hand, today saw the finales of both Tom King's Batman run as well as Geoff Johns' and Gary Frank's Doomsday Clock, as well as the penultimate issue of Scott Snyder's Justice Doom War storyline in Justice League. Out of the three, I definitely want to talk about Doomsday Clock because the finale of this maxiseries lays the groundwork for the future of DC, and for once, I'm actually excited about DC's future plans!

I will admit, Doomsday Clock has been something of a frustrating journey for me as a DC fan, in part because the story took too long to revisit the original thesis of DC Universe Rebirth #1, and in part because the Watchmen characters were being utilised in a way that missed their entire point in the original story. However, I'm not going to talk about the shortcomings of the story, but rather the actual message that it ends on:

'The DC Universe and characters are precious because of the positive influence they have on our lives.'

Doomsday Clock is ultimately Geoff Johns' and Gary Frank's love letter to both the DC Universe and DC Comics fans, and make their point in five satisfying ways:

1. The pre-Crisis and post-Crisis Earths are re-canonised and exist in the DC Multiverse. 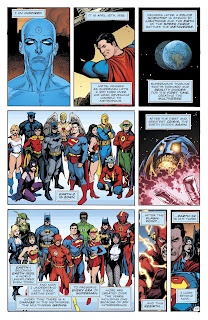 This is the first important accomplishment of Doomsday Clock because the jettisoning of past continuity is what has consistently made fans resistant to change. No one will argue that DC Comics characters will always need to be reinvented in order for them to stay relevant to modern audiences. The problem, however, has always been DC's approach to innovation.

Between the Crisis on Infinite Earths reboot of 1986 and the Flashpoint reboot of 2011, DC has consistently made the mistake of retconning entire decades of history and character development for the illusion of change. In many cases, only certain characters would be rebooted from scratch while others would remain largely intact from past continuities. To further complicate things for many DC fans was seeing their favourite characters get written out of continuity and later brought back as less recognisable versions of themselves. This approach to innovation in both cases ended up alienating existing fans and even made these newer continuities inaccessible to their intended newer audience.

Doomsday Clock reinstating all of these past continuities as separate Earths in the DC Multiverse co-existing with the current mainstream Earth is a good compromise for selling DC fans on a new upcoming reboot. By re-canonising all of the stories that came before, DC is communicating to readers that these stories still matter and their favourite versions of DC characters still exist. It also leaves the door open for future storytellers to revisit these worlds and these past versions of DC characters to continue telling stories with them. This is a great way to appease older fans while at the same time developing a new universe that's accessible to newer fans.

2. The events of Crisis on Infinite Earths, Infinite Crisis, and Flashpoint still happened. 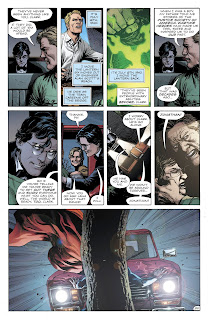 Continuing from the point above, in the same way that Doomsday Clock reinstates all past continuities as separate Earths in an infinite multiverse, it also avoids retconning past events and storylines. While DC events can be either highly popular with fans or highly polarising, retconning events or status quo-shaking storylines has rarely fixed any existing problems with those storylines or their aftermath.

In many cases, attempts at retconning those events ends up convoluting continuity way more than it ends up helping it. This is especially true when other writers choose to ignore retcons and continue to build on the events of those storylines for their own stories. Instead of retconning, Doomsday Clock argues that it is best to acknowledge the past for what it is and to move forward with a better direction.

While this can be hard to do especially in cases where a bad storyline profoundly changes a character in a damaging way, with enough time, distance, and better writing, those storylines can eventually be made irrelevant (even forgettable) to a modern audience.

3. Each DC reboot results in the creation of a new Earth in the DC Multiverse. 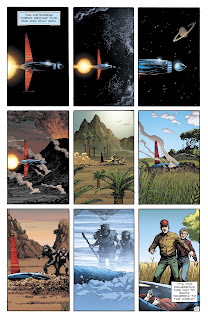 This is perhaps the most important lesson learned from the past two reboots, and one that can prove successful in winning existing audiences on a new reboot. One of the core themes that was touched upon in Doomsday Clock #10 was the idea of the DC Universe being an actual metaverse, which provides the blueprint for DC's infinite multiverse.

In the same way that Earths 1 and 2 were past main DC Earths in the pre-Crisis continuity, 2006's Infinite Crisis similarly established that the post-Crisis DC Earth was a 'New Earth' separate from Earths 1 and 2, designated Earth-0. Doomsday Clock #12 reinstates this idea with the post-Flashpoint Earth by designating it Earth-52, and even establishes that the future main DC Earth will be designated Earth-5G.

4. The return of fan favourite teams that were retconned in past continuities. 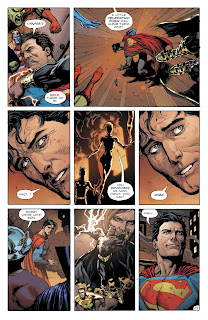 This is definitely one that will please a lot of people. It certainly made me happy to see the return of fan favourite teams like the Justice Society of America and the Legion of Superheroes. With the JSA in particular, it wasn't just the original founding members from the Golden Age that returned, but their successors as well.

It was definitely a joy to see Jade and Obsidian alongside their father Alan Scott again. We even got to see long forgotten Infinity Inc characters like Yolanda Montez and Beth Chapel as Wildcat and Dr. Mid-Night respectively. And, of course, we got back fan favourite characters like Courtney Whitmore as Stargirl and Jakeem Thunder.

Even the pre-Flashpoint version of Power Girl who was established as the sole Earth-2 survivor of Crisis on Infinite Earths made a comeback in this issue. Whether or not her appearance in Doomsday Clock #12 coincides with her return in Deathstroke Annual #2 from last year isn't acknowledged. But there is one more return teased in today's finale that has me excited for next year, and that is...

5. The implied return of the pre-Crisis Helena Wayne Huntress 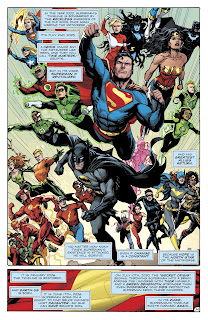 This one at least confirms one of my theories that Helena Wayne will be integrated into the main Earth continuity sometime next year as part of the 5G timeline. However, the way Geoff Johns teased her return in Doomsday Clock #12 was a more pleasant surprise than I expected!

While many Batman fans are interpreting Helena Wayne's teased return in Doomsday Clock as evidence that she will be born to the main Earth Bruce and Selina, there are two key words in today's tease that make me think it is actually teasing the return of the original Earth-2 Huntress:

Of course, nothing is set in stone, and DC can still change the way Helena Wayne is brought into the main continuity. But the key words of 'lost daughter' does not imply that this Helena Wayne will be the daughter of the main Earth versions of Bruce and Selina. Instead, it seems to be referencing the loss of the original Earth-2 Huntress to the events of Crisis on Infinite Earths—a storyline that will still be canon in the upcoming 5G timeline. The other piece of evidence that makes me think Johns is teasing the return of the Earth-2 Huntress is the fact that he refers to Damian as 'Bruce's son' and not as Helena's brother. To me, this actually makes more sense.

More than Helena Wayne exists to progress the romantic narrative of Batman and Catwoman, Helena Wayne is actually a character who has her own identity and exists to be the hero of her own story. She is meant to exist in a world where Batman and Catwoman actually age, marry, and die like normal human beings. This will never be the narrative for the versions designated as the main versions as those versions are meant to uphold a specific status quo. Even if DC does choose to marry them at some point, it will be done as a gimmick at best and it will not be made to last.

The other reason it makes more sense to bring back the original Earth-2 Helena Wayne is because doing so will allow her to keep all of her original history intact whereas a main Earth version will not be able to reclaim much of that history. For example, Helena Wayne is in a better position to maintain her status as the original Huntress if she is from the pre-Crisis Earth-2, whereas a main Earth version will never originate the Huntress identity on an Earth that already has Helena Bertinelli.

In addition to reinstating an iconic World's Finest friendship, reinstating the pre-Crisis Helena Wayne would also alleviate Power Girl of the burden of being the sole survivor of an event that literally destroyed her life. Reinstating the pre-Crisis Huntress would also allow Power Girl to meaningfully heal from that traumatic event in her life, and the rich history that these two women share as legacies of DC's Golden Age also means they are ripe with strong story potential.

On the whole, reinstating the pre-Crisis Earth-2 Huntress is the only way DC can do right by a character like Helena Wayne, especially with respect to her actual history. If today's tease is what's in store for Helena moving forward, then this will be the first time in three decades that DC has been moving in the right direction with her character. That cannot be overstated!
Posted by Diane Darcy at 21:00