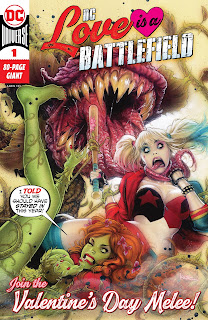 It's Valentine's Day today! My favourite day of the year for talking about Helena Wayne's love life, and making Valentine's Day graphics with Huntress and Power Girl. (In fact, you can check out the ones I've already made this year on my Instagram.)

Normally, on this day, I would be writing essays, opinion pieces, or even a fun 'Top #s' list on Helena Wayne's significant relationships. But for once, DC actually delivered the goods themselves!

'Huh? What's that you say? You mean DC finally hooked up the Earth-2 Huntress with Power Girl or Nightwing or someone since her doomed relationship with Harry Sims in the 1980s?'

Well, no, not exactly. That would be too good of a day for me if DC finally published a heathy romance story with Helena Wayne in any capacity. However, she did appear in last week's DC Love Is A Battlefield special, and you won't believe which story she actually appeared in! I'll give you a hint: It is NOT the Batman and Catwoman story by Christos Gage and Xermanico as one might expect!

Instead, our beloved Earth-2 Huntress appeared in another story involving another fan-favourite dynamic duo: the Harley Quinn and Poison Ivy romance story by Tim Seeley and Rebekah Isaacs!

In the story, an elderly Harley and Ivy reminisce about the old days of them causing mayhem and mischief in Gotham. In one of those past adventures, Harley and Ivy encountered the Earth-2 Helena Wayne Huntress, who happened to be paying a visit to her Earth-0 family. Noticeably, the Earth-0 Batfamily had also acquired a new female Robin by this point in their timeline who looks very similar to her New 52 self.

Of course, comic book Twitter and even CBR exploded with speculation as to the identity of that new female Robin. While many were hoping that Robin would be Helena Wayne's main Earth counterpart, the writer himself, Tim Seeley, confirmed on his Twitter that this was not the case. He did explicitly confirm that the Huntress appearing in the story is the Earth-2 Helena Wayne, but that the female Robin is someone else entirely:

My thought was that this is like 5-10 years into the future, that's a totally new kid as Robin, and that's the original Earth-2 Helena Wayne Huntress. Just fer fun. 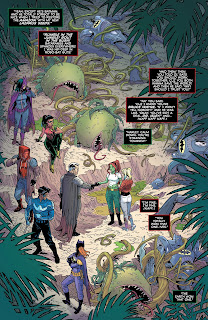 So if that future Robin isn't Helena Wayne's main Earth counterpart, then who could that new female Robin be? Athanasia—who is Bruce Wayne and Talia Al Ghul's daughter in the Injustice universe—perhaps? Given that DC seems to be shifting focus to the Batman/Talia relationship for Infinite Frontier this decade, it's not an unlikely possibility!

The part that has me feeling giddy, however, is the cameo by the Earth-2 Helena Wayne Huntress herself. Can we expect to see more future appearances by our favourite Earth-2 heroine once the Justice Society makes a proper comeback? I certainly hope so! Return of the classic Helena Wayne Huntress is long overdue at this point, along with her getting more stories with Power Girl and the Justice Society!

What does everyone else think? Think we'll finally get to see our favourite Huntress back in action during the Infinite Frontier era? Let us know in the comments below!

Become a Patron!
Posted by Diane Darcy at 09:30