The Best of Huntress and Power Girl: Wonder Woman #274 Review 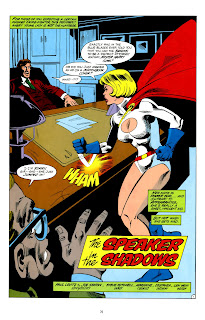 Summary: Part 01 of this narrative opens up with Power Girl confronting Gotham DA Harry Sims at his office following a recent endorsement to police the superhero community. She believes Harry's anti-cape agenda is uncalled for considering the work superheroes have repeatedly done to protect Gotham from dangerous criminals. Harry condescends Power Girl about needing to handle problems in a more 'reasonable' manner, to which she retorts with 'if I didn't have principles, I'd show you five fingers worth of reasonable.' Power Girl is only persuaded to leave with the arrival of the Huntress, who--through a subconscious gesture--accidentally tips Harry off on her identity.

Huntress and Power Girl go for coffee together in their civilian identities, and Helena reveals to Kara that she and Harry have been pretty close lately. Kara is still not impressed by him, and still thinks he's an idiot (I don't blame her). They go on to talk about how easy it is for Helena to separate her Huntress identity from her civilian one, whereas Kara continues to struggle to separate her 'Karen Starr' persona from Power Girl since she identifies more strongly with the latter. The only way she's been able manage the dual identity issue has been through her interaction with Andrew Vinson (called 'Andy' here) who helped her establish her civilian profile.

Kara (through super hearing) learns from a radio broadcast that Harry Sims had backed down on his vigilante charges against superheroes. She's pleased to hear this news but Helena isn't sure that Harry would just suddenly 'back down' on an issue he feels strongly about, and decides to investigate further. Both women head back to Helena's office at her law firm. On the way there, Helena explains why she feels something is off about Harry's behaviour, though the reader isn't let in on that since that conversation happens off panel. At Helena's office, her secretary, Carole, is seen running out in a rush, which leaves Helena wondering what's going on with her. It turns out she had an appointment to keep with a mysterious man she apparently owes money to. Exactly why she owes him money is left a mystery.

Another mystery that comes to the surface is Harry Sims' secret deal with Justice Society villain, the Thinker. It turns out the initiative to police superheroes was part of the Thinker's upcoming plan, though how exactly Harry got blackmailed into fulfilling his goals isn't made clear. Nevertheless, Harry decides to backdown on his side of the deal (presumably due to learning Helena's identity as the Huntress) which causes the Thinker to attack him. The villain proceeds to move forward with his plan, beginning with the setoff of a few carefully placed incendiary devices inside the Acme Engraving Plate Company building. This attracts the attention of Huntress and Power Girl.

Inside the building, it is revealed that the Thinker is looking to steal a few expensive plates from the company to sell to the foreign market, and is using the blaze as a coverup for the actual crime. After all, no one will assume any plates got stolen if they're assumed to have been destroyed in the fire. A group of men proceed to carry out the Thinker's plan, though the theft of the plates is foiled by Huntress and Power Girl who arrived just in time to intervene. Together, they effortlessly capture the men, but realise that there is more happening outside the building than within it. 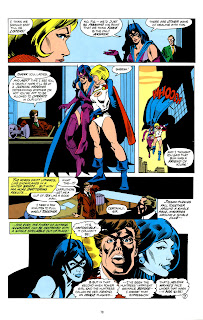 Review: This first chapter doesn't really do a whole lot except establish what's going to take place for the next few chapters. New developments are established here, but at the same time the 8-page format makes it difficult to fully flesh out some of those ideas, forcing the writer to compensate through shorthand.

One such example of this is the revelation of the Thinker manipulating Harry Sims into endorsing a 'checks and balances' system against superheroes. We know what his plan is, but it is never explained why he needed the Gotham DA to keep the superheroes at bay beyond the obvious 'problem' of them getting in his way. Another example is readers not being let in on Helena's theory on why she thinks something is amiss with Harry Sims' behaviour. A third example is Harry being revealed as Helena Wayne's lover for the past few months when previous narratives never indicated mutual romantic attraction between the two, especially from Helena. At what point did Helena start taking an interest in Harry? What special thing did she notice about him to make her overlook his patronising behaviour in this chapter?

Aside from working in the same profession, there is a remarkable lack of chemistry between the two characters, largely because Harry is not a well established character at this point in Helena's narrative. In fact, this is only his second appearance. Without taking the time to properly develop a relationship between these two characters, their sudden pairing feels forced and Harry's sudden realisation that Helena Wayne is the Huntress lacks impact.

Another development that could potentially lose readers (particularly ones who haven't been reading Power Girl in the Justice Society comics and solo stories) is Power Girl struggling to separate her superhero identity from her civilian one. Without knowing who 'Andy' (short for Andrew Vinson) is, for example, the reader unable to fill in the gap on how he's been helping her balance her dual identities, or why this character is even important to her.

Despite some those issues brought on by the limitations of the 8-page space, the narrative nonetheless establishes the Huntress and Power Girl friendship, and how these two women coordinate together as a team. The way both women play off of each other feels organic and can be funny at times, particularly when they make back-and-forth snarky remarks on the incompetency of Gotham's criminals. The only issue here is that writer Paul Levitz attempts establish a contrast between the two women by making the Huntress appear to be the more 'rational' heroine of the duo, but I actually find myself siding with Power Girl instead.

Within the context of this story, Power Girl presents very legitimate reasons for being distrustful of Harry. Out of the blue, he decided to police the superhero community without presenting any foundation for the initiative, and avoided addressing her concerns when she decided to pay him a visit. The fact that he condescended her on top of that did nothing to ease her concerns for his suspicious behaviour. The Huntress, on the other hand, is written as excusing behaviour she recognises as 'out of line,' namely as a tool for reminding the reader that she's romantically involved with the man they're up against. This not only creates a false tension for the heroine (namely because of the lack of build-up), but it also doesn't make Helena look particularly bright in this situation. 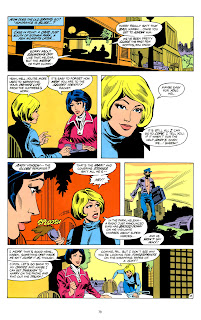 One interesting thing of note in this first chapter is the presence of a woman of colour in a recurring role. This is significant because at the start of the 1970s, both DC Comics and Marvel started noticing a problem with POC invisibility in their comics. While people of colour have certainly appeared in their comics before this decade, they hardly existed as active agents in a story and were often used as background decoration. It's enough to say robots and extraterrestrials got to work alongside other superheroes (especially the Justice League) before a person of colour was ever granted that same luxury.

Coming at the heals of the US Civil Rights Movement of the 1960s, and during a decade of Second Wave Feminism, both DC and Marvel decided to combat that existing problem by actively putting more people of colour on the forefront and writing them as active agents in their stories. At DC alone, this was accomplished with the creation of new superheroes like John Stewart as a Green Lantern in 1971, and Mari Jiwe McCabe as Vixen ten years later in 1981. In addition to creating new superheroes who were people of colour, people of colour were also being given roles as news reporters and as supporting cast. The character of Carole (Helena Wayne's secretary) falls into the latter category.

It is evident from Carole's first appearance that she is not meant to exist as background decoration, and that is made especially clear in this first chapter where she is given a story arc of her own. Exactly what her story will entail is left a mystery, but this can either be a groundbreaking narrative for the character, or it can develop into a well-intentioned, but ultimately stereotypical narrative for a black woman. In other words, her story could either challenge the status quo of black women in superhero comics, or it could reinforce it.

Some other minor issues with this first chapter includes awkward and clichéd dialogue in various places, namely during the fight scenes between the heroines and the Thinker's henchman. Even the scene that reveals the Thinker's involvement in Harry Sims' 'superhero checks and balances' initiative is met with some really awkward dialogue between the two characters. Aside from that, however, the first chapter basically accomplishes the goal of informing the reader on what to expect to see happen in the chapters that follow.