The Best of Huntress and Power Girl: Wonder Woman #276 Review 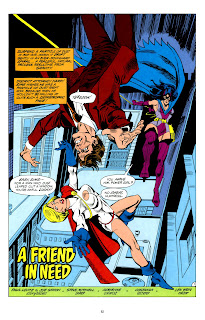 Summary: Picking up right where part 02 ended, both Huntress and Power Girl rescue Harry Sims from a deadly fall, and in a panic, Harry inadvertently reveals he is aware of Helena Wayne's identity as the Huntress. This shocks both women. Helena drugs Harry to sleep and both women ponder what to do next. Realising Harry now knows Helena's most precious secret, Power Girl enquires Helena on what she plans to do about that. Helena says she doesn't know, but isn't going to concern herself about it for the time being since there are higher priorities to attend to. Power Girl interprets this to mean her 'priorities' lie with her boyfriend, and departs to pursue his would be killer.

Power Girl goes into Harry's office to investigate and finds him inside signing the bill for policing superheroes into law, which baffles her. If the man they rescued just seconds ago was Harry Sims, then who was the imposter personating him in his office? Is he the real Harry Sims and the one she and Helena rescued was bait for them? Power Girl goes in for answers, and the minute she starts asking questions, Harry's gaze starts to take control over her, revealing to the reader that he is actually the Thinker.

At Helena's law firm, Carole is troubled by her earlier encounter with the mysterious man from two chapters ago and decides she wants to tell someone about it. She decides to see Helena, but finds her with a man in her office and decides not to disturb them. Helena still notices her presence and wonders what she needed to see her about. Harry wakes up and asks Helena what she plans to do about his knowing her secret. Helena changes back into her Huntress costume and responds that she doesn't know at the moment. She departs to help Power Girl take down the person who attempted to murder Harry.

At Harry's office, the Thinker now has complete control over Power Girl, but his influence over her is disrupted when the Huntress fires a crossbow bolt into his helmet. Despite causing damage to the Thinker's helmet, he is still able to get Power Girl to fight against her best friend, and the Huntress is left at her mercy. Realising that with one single blow, Power Girl could easily end her life, the Huntress struggles to keep her best friend from killing her without harming her in the process. Knowing that the only way she can completely sever the Thinker's influence over her best friend is to destroy the helmet entirely, Huntress figures that if she can manage to toss Power Girl in the direction of the Thinker, she can use Power Girl's own body weight to completely break the helmet.

Huntress manages to toss Power Girl in the Thinker's direction, which only succeeds in knocking the helmet off his head. No longer influenced by the Thinker's power, Power Girl smashes the helmet with her bare hands. Huntress jokingly accepts Power Girl's impending apology for almost killing her, and asks her to stick around to explain the situation to the people pounding on the door. She then departs to take care of a more personal matter. (In this case, dealing with Harry knowing her secret). 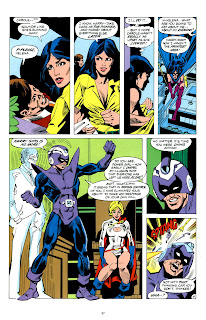 Review: After an awkward second chapter, this third instalment could go one of two ways: either it could do a better job at bringing all established plot points together into a logical conclusion, or it could continue the pattern of the second chapter by establishing new information without answering earlier questions, resulting in an awkward conclusion. This concluding chapter falls somewhere in between.

For starters, writer Paul Levitz does 'wrap up' some plot points that he established in the previous chapters, such as Carole's mystery man. While that plot line doesn't get resolved in this story arc, it does setup for a future story. Another thing that gets wrapped up is the Thinker's ultimate game plan to get the Gotham DA to endorse a law that will enable the justice system to try costumed superheroes as illegal vigilantes in a court of law, effectively getting them out of his way. It does, however, render his earlier plan to steal some precious plates to sell the the European market irrelevant and ultimately pointless to overall story. In the end, the Thinker's plan was to find a way to get superheroes out of his way by using the very system they protect against them. The last plot point Levitz continues to explore in this concluding chapter that sets up for a future story arc is Helena Wayne dealing with the reality of her double life being discovered by her lover.

Despite Levitz tying up the main plot developments of this story arc while setting up for future ones, the conclusion is ultimately unsatisfying. Even when I think about it from a kid's perspective (which this story was originally written for), it goes through the technicality of the main villain committing a crime at the beginning of the story and ending with the hero defeating them, there's still no major payoff for the reader. While many pre-Crisis comic narratives (particularly in the Golden and Silver Ages) often followed this format, one thing that stood out about the Bronze Age stories is that more complex reasons were often established for both hero and villain motivation. If the Thinker, for example, suddenly decided to have the Gotham DA endorse a law the enabled the justice system to try costumed superheroes as vigilantes, the motivation behind that would've been explored further than the Thinker simply wanting the Justice Society heroes out of his way. Had Levitz been given more page space, it's probable he would've developed his ideas further, leading to a far stronger conclusion.

Another major development that had a lot of promise but ultimately fell short on was further exploration of the Huntress and Power Girl friendship. One of the strongest aspects of the relationship is the fact that the women are the heirs of Batman and Superman respectively, and get to be a part of a very rich history dating back to the late 1930s. Another major appeal of the relationship is the fact that there is very strong chemistry between the two women, even without acknowledging the families they are apart of and their existing history. When Power Girl first appeared in comics in 1976, most of the people she interacted with were men and had fewer opportunities to enjoy the company of other women. A lot of the time she was seen foiling her male comrades and challenging their sexist ideas about women, namely Wildcat.

With the introduction of Helena Wayne as the Huntress a year later, Kara was finally given a female companion to interact with, particularly one who shared her feminist outlook on life. It was therefore no surprise these two women clicked right away with strong potential to go somewhere interesting. By having another woman around for Kara to relate to, it allowed for other aspects of the character to come to the surface and be explored. What is Kara like when she's not constantly dealing the sexist behaviour of her male comrades? How does she relate to other women? How does she respond to being in the company of a woman who is just like her and shares many of her interests and values? These are all questions that get addressed in this and in various comics that feature these two women together. The only downside in this particular story is that writer Paul Levitz attempts to establish differences between the two women in incredibly stereotyped ways. Too often the 'differences' come at the expense of Power Girl and as a way of elevating the Huntress. 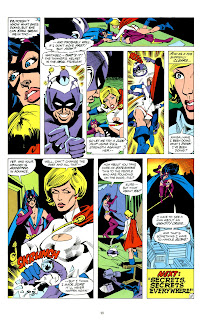 The last major development worth addressing is the establishing of Harry Sims as a romantic partner for Helena Wayne. Had these two characters been given the time and page space to properly develop a relationship between them before pairing them off, it may have been easier to see why these two characters would be attracted to each other. But seeing as they were just forced together without any development, it's hard for me as an objective reader to see why someone like Helena Wayne would be interested in someone like Harry. All we know of him at this point in her narrative is that he is Gotham's district attorney, which places him in the same profession as Helena. We also know from an earlier story he is attracted to Helena, and we know from this one that he is easily manipulated by villains with some indication that he himself is not fond of costumed superheroes.

From Helena's perspective, we know that she doesn't like men stopping by her flat at 3:00 in the morning (and assumes any man who does is looking for sex--this did actually happen), doesn't like being patronised by men (something Harry does to Helena all the time), and clearly takes issue with any laws that propose policing costumed heroes despite their track record with stopping dangerous villains. When you examine both characters, they literally don't make sense as a couple. While Levitz does clearly want to go somewhere with this pairing, the fact is the chemistry is simply not there for the reader to be properly invested. In the same way that Harry learning Helena's identity didn't have the impact it should've had on me as a reader, Harry suddenly deciding being in a relationship with a superhero isn't his cup of tea isn't going to feel any different.

On the subject of law, it's also worth noting that attorneys don't actually sign any bills into law as that privilege is reserved for higher authorities such as state governors. As such, even as Gotham's district attorney, Harry was never in any position to endorse a law as he is neither a member of Congress nor the governor of Gotham. At best, as a lawyer, he can propose a bill to Congress, but beyond that, he doesn't have any authority over the fate of that bill, or whether or not it gets any votes at the House of Representatives. While anything pretty much goes in comic universes, one thing that was unique about the pre-Crisis Earth-2 was the fact that the characters often dealt with real world issues and even discussed events that happened in the real world (as in our world). As such, Earth-2 had a very grounded 'real world' feel to it despite being populated by superheroes and supervillains. If anything, Harry suddenly signing a bill into law should've made a huge blip in Helena's radar that something was completely off base with him from the beginning, especially since she should know as an attorney herself that Harry doesn't have the privilege of signing any bills into law, not even at the state level.

Taken as a whole, this story establishes interesting ideas and relationships with strong potential to develop into something interesting, but are ultimately not fully explored or developed properly due to a limited page space and forced storytelling.