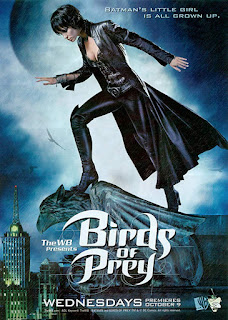 Summary: Into these women's lives comes an innocent teenage girl named Dinah, who is drawn to the clock tower by powerful, haunting visions. Unsure of her background but impressed by her budding meta-human powers, the two crime fighters allow Dinah to help them thwart a criminal scheme that has resulted in several mysterious suicides and threatens the city's infrastructure.


Review: This past October, I decided to revisit the 2002 Birds of Prey television series for the first time since my initial viewing of it back in 2007. Long-time readers of my blog have been asking me for years talk about this show on the website, and now that Birds of Prey star Ashley Scott is reprising her role of the Huntress for the upcoming Arrowverse crossover, Crisis on Infinite Earths, I felt now was the perfect time to revisit her show.

The first time I watched Birds of Prey back in 2007, I became aware of it because it was noted as the first live-action appearance of Harley Quinn, who was my favourite DC character at the time and the reason I started reading DC Comics. Out of the entire cast, only Barbara Gordon as Oracle was known to me because she had appeared in various comics featuring Harley, but the other two characters—Huntress and Black Canary—were completely unknown to me at the time.

In 2007—at the age of 21—I had never heard of the Huntress nor Helena Bertinelli, nor even Dinah Lance as the Black Canary despite being highly popular characters in the wildly successful Gail Simone run of the Birds of Prey comic by this time. It's also worth noting that I was not invested in DC as a whole universe by this timeframe and wouldn't become invested in the larger DC lore until literally a year later—in 2008—when I read my first Helena Wayne Huntress comic in Justice Society of America Annual #1.

I guess you could say my journey as a Huntress fan started in the weirdest way possible. My first exposure to the Huntress ever was the Birds of Prey television show, and that version of the character was Helena Wayne (renamed Helena Kyle) for the show's narrative. As far as I was concerned, the Huntress was the daughter of Batman and Catwoman, and the first mainstream Huntress comic I read featured that version of the character.

I literally became aware of the Helena Bertinelli iteration after I read every comic I could find with Helena Wayne and learned how the character was rebooted—ironically—following the events of the 1985 comic, Crisis on Infinite Earths. It's even more ironic that the same event that took Helena Wayne off the table for over two decades in the comics—causing my generation to grow up without her—is about to make her a household name again as millions of viewers around the world tune in to their TV screens for the televised version.

We now get back to Birds of Prey, the show that's facilitating Ashley's Scott's return to the role of the Huntress 16 years later.

I remember when I first viewed the pilot in 2007, it was the unaired pilot with Sherilyn Fenn (of Twin Peaks fame and now DCU Titans) in the role of Harley Quinn, and I remember enjoying her in the role. I was sad to learn Fenn was recast with Mia Sara (of Ferris Bueller fame), but still felt she did a good job with the role despite being a darker, more sinister take on the character than the more outgoing and playful Harley I grew up with.

The stars of the show, however, are Huntress and Oracle—played by Ashley Scott and Dina Meyer respectively—whom I enjoyed watching at age 21. Even today, I still enjoy the dynamic of the ever rebellious Huntress and the more conventionally heroic Oracle who has different ideas about what it means to be a hero. Whereas protecting New Gotham from crime is very much Barbara Gordon's passion from her Batgirl years carried over to her new occupation as Oracle, Helena Kyle by contrast doesn't seem to care much for this lifestyle in the first episode.

Like her mother, Selina Kyle (Catwoman), being a superhero isn't really her jam, but Helena does enjoy the adrenaline rush of beating up bad guys every night. She just doesn't like taking responsibility for the property damage or the arrests for missions Oracle sends her on.

Another thing I remember enjoying about Helena Kyle back in the day that I still enjoy today is that she's very much like her mother, which makes the Huntress name all the more appropriate. Her starkly different values even make her interactions with Barbara Gordon oddly resemble the ones between Batman and Catwoman (her parents), but without the sexual tension. Instead, it comes from the perspective of a mentor guiding an apprentice, almost as if Batman was training a very rebellious Robin.

The complementary, yet loving relationship between Barbara and Helena is one of the major selling points of the show for me, and it helps that the two actresses have great onscreen chemistry. Ashley Scott is very convincing as the cynical and rebellious Huntress with a heart of gold, and Dina Meyer is solid as Oracle.

Since Barbara was the only other character besides Harley I was familiar with from the comics and other media in 2007, Dina Meyer was, in my opinion, the most faithful adaptation of her comic book character. Twelve years later, I still maintain this opinion. Like the Barbara Gordon of the comics, Meyer's take on the character is still a passionate crimefighter. She's also highly intelligent, and most importantly, tech savvy! Meyer succinctly brings all of those qualities to her character, which makes Oracle come truly to life on the small screen. To this day, I'm still impressed WBTV got Oracle right the first and only time we saw her on TV.

The one character I wasn't entirely sold on back then was the character of Dinah Lance, and it was not due to my knowledge of the comic book character. Again, I didn't know the character at the time since I was not a seasoned comic book reader like I am now. Rather, what didn't sell me on the character was her being a minor wanting to join Barbara and Helena's team for reasons that were almost non-existent beyond seeing them in premonitions as a child. I still got that same impression on this viewing, but from an entirely narrative perspective, and not because Dinah's depiction in this episode contradicts my mind map of the character I now know from the comics.

The part that still feels off to me in terms of story is the way Dinah is somewhat easily taken in by two adult women who are (by all accounts and purposes) strangers to her. For one, an information broker like Oracle would look into her past right away, and try to contact her parents instead of examining her to see if she really is a metahuman like she claims. On the subject of Dinah's parents, their status quo is left a bit ambiguous in the pilot episode. On the one hand, we do see Dinah's mother in the opening scene and appears to have a loving relationship with her. Then Dinah, apparently, just up and left home for New Gotham before she was of age.

One thing I do enjoy about Dinah in the pilot episode is her enthusiasm for superheroics and the idealism that she brings to the table. She is a wonderful buffer to both the more cynical Huntress and the more seasoned Oracle, which allows her to—in a strange way—function as the glue that holds the team together. This incidentally allows the show to explore its more important theme of family.

To each of the three women, the concept of family means something different as shaped by their lived experiences. For Barbara Gordon, family is the people she welcomes into her life and forms meaningful relationships with. These are the values she learned from her exploits as Batgirl working alongside Batman, and continues to possess as Oracle.

I would say the theme of family and exploring what this means to each of the women in the cast is the real strength of the show, and one that the pilot episode makes clear in its first launch. As for the rest of the story, it does what every pilot episode is supposed to do. It establishes its main characters, its main villains, its setting, and premise. One thing I enjoy about this particular pilot is that it avoids setting up various storylines to sell to the studio in the hopes of getting a full series ordered. It gets its entire point across in a one-and-done story, which I think works in its favour.

Now for the fun part that my readers are probably interested in: How much differently do I feel about the show now—12 years later at age 33—and with a more in-depth knowledge of each of the characters. To be honest? Not much different. My impression of the pilot episode is very much the same as before, only now with the added bonus of nostalgia from hearing songs like 'On a High' by Duncan Sheik and 'All You Wanted' by Michelle Branch as part of its soundtrack—all songs I grew up with in my teenage years.

Obviously, like a lot of comic book fans, there is a lot I wish had been done differently. However, I also take into account that the show was made in a different time with a different target audience in mind. Had this same show been made today with the same characters, we would probably have a more faithful adaptation of the Birds of Prey comic with an adult Dinah Laurel Lance as the more seasoned Black Canary we're all used to, operating as Oracle's first agent.

If the show had still gone with the original Helena Wayne Huntress as a team member, we would probably have a more faithful take on the character today now that more material exists with her character compared to 2002. For example, we might have a Helena Wayne who was born out of the marriage of Batman and Catwoman and still became the Huntress in response to their legacies, and not just their tragic deaths.

Still, the show that we do have is still enjoyable for what it is with the potential to be something more should the CW decide to give it another shot as part of the Arrowverse post-Crisis. Now is definitely a good time for the show to make a comeback in a decade where superhero fiction is becoming more visible and respected in mainstream pop culture. Something I'm sure I'll talk more about when I discuss the remaining 12 episodes in upcoming posts!