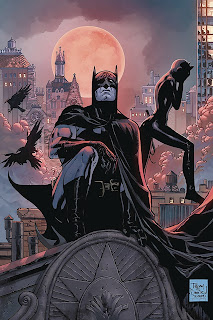 Earlier today, Newsarama confirmed the status quo of Tom King's upcoming Batman/Catwoman maxiseries as being 'outside the bounds of continuity' and won't impact James Tynion IV's own plans for Batman and Catwoman in his Batman run. When enquired about the status quo of Catwoman's pregnancy in the main Batman canon in an interview, Tynion had this to say:

Nrama: You’ve been utilizing Catwoman as Bruce’s partner. But did you know about this pregnancy that Tom King is doing when you came on Batman? Does that play a role in your run at all? Or is that something that Tom King is handling?
Tynion: That’s more the purview of Tom King and his book, which is sort of moving outside the bounds of continuity, as far as I understand.
Right now, we’re focusing on the core Batman story, happening in the pages of Batman.
I’m very excited to read Batman/Catwoman, in the same way, I’m excited to read Three Jokers, but neither of them really have much effect on the core story I’m telling.

Speaking for myself personally, I can't say that I'm surprised by this news as I thought it was obvious from the get-go that Tom King's Batman/Catwoman book was never going to be set in the main DC canon. To start with, the premise for the story would've required a major status quo change for all characters involved (Helena Wayne included), and I've been a DC fan long enough to know this was never going to be the case. If DC intended for Batman and Catwoman to have a baby on the main DC Earth, that story would be taking place in the main Batman book and not in a limited series.
When it comes to the main Earth versions of Batman and Catwoman, I've long gotten used to the fact DC will always stick to the status quo and will never impose any permanent changes to their characters. Marrying them off and giving them a baby in the main DC canon would be a permanent change, and they're never going to go there to avoid hurting both characters' future profitability. This is the way corporate DC thinks. If anything, the non-BatCat wedding of 2018 made DC's position on this concept pretty clear.
'But what about Helena Wayne?' 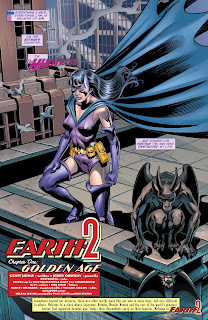 Helena Wayne is a fan favourite character, no questions there. I'm one of her biggest fans myself (obviously). But here's another truth about Helena Wayne: she is a character with an established history and a built-in core mythology that isn't compatible with the main Batman canon. To start with, Helena Wayne is the original Huntress, which already puts her character concept at odds with the existence of Helena Bertinelli, who is the main DC Earth's Huntress. Additionally, she is the daughter of the Golden Age versions of Batman and Catwoman who are part of a very different era of DC, and part of a completely different narrative all together. This actually brings me to my next point:
Helena Wayne was created for the Justice Society property.
When Paul Levitz, Joe Staton, and Bob Layton came up with the concept of Helena Wayne as the Huntress, they intended for her character to bring gender diversity to the Justice Society team on Earth-2, and to build the team's legacy by being a second generation hero. DC accomplished this by making her the daughter of a Golden Age hero—in this case Batman—who was never an official member of the team. Essentially, the Huntress ended up functioning as the Justice Society's answer to the Justice League's Batman on Earth-1.
When Helena Wayne wasn't fighting alongside the Justice Society, she protected Gotham in her father's stead and started a new legacy in the city as the Huntress. (It is also worth noting that Helena Wayne's Huntress origin very much depends on the deaths of both of her parents because it's meant to mirror that of her father's.) As one can tell, this is not a premise that will ever take form on the main DC Earth where Batman will always be the status quo. Changing Helena Wayne's identity, core mythology, and narrative to accommodate the main Batman canon would be a huge disservice to both her character and her immediate fans.
'Well, then, how else are we supposed to get Helena Wayne on the main DC Earth?' 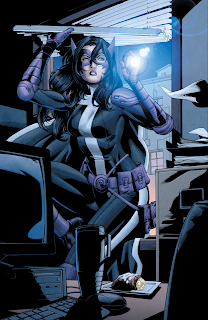 The answer to that question is a lot simpler than figuring out how to change the main Earth versions of Batman and Catwoman to accommodate Helena. Prior to Crisis on Infinite Earths rebooting the main DC line in 1986, Helena Wayne was already a canon DC character appearing in DC's mainline comics. She's canon in the same way Power Girl and the Justice Society are canon. All that DC has to do here is simply do a storyline that retcons the original Helena's death in Crisis, and work on adapting her character to the main DC Earth, complete with restoring her relationships with Power Girl and the Justice Society. (In fact, last year's Doomsday Clock #12 teased this as a future storyline.)
The premise of 'Earth-2 survivor of Crisis' is already Power Girl's storyline on the main DC Earth. Adding Helena Wayne's Huntress to that mix would improve Power Girl's narrative as well as give Helena Wayne a reason to be on that Earth. By making the original Helena Wayne character an Earth-2 survivor of Crisis like Power Girl, DC also avoids changing both Helena and the main Earth versions of her parents. Helena can still form relationships with the main Earth versions of Batman and Catwoman without needing to be their actual daughter.
'So then why should I buy Tom King's Batman/Catwoman book if it isn't main DC canon?'
I'm a strong advocate of investing in stories you think you will enjoy and to not let the canonicity of those stories impact your ability to enjoy them. Take it from me as someone who's favourite DC stories were eventually retconned by two DC reboots (i.e., Crisis on Infinite Earths and Flashpoint). If I allowed the canonicity of DC stories to impact my experience with those stories, I would never buy a DC comic at all, let alone revisit any of the ones I've already bought. But at the end of the day, I only care about the characters and their stories, not DC's ever changing (and frankly convoluted) canon.
Justice Society of America Annual #1 was my first Helena Wayne Huntress story. I still read and enjoy that story despite no longer mattering in the current (pre-Death Metal) continuity. Same with The Huntress: Origins, All-Star Comics: Only Legends Live Forever, Infinity Inc: The Generations Saga, and America vs The Justice Society. All of those stories still matter to me and continue to leave a profound impact on me despite DC's flimsy status quo when it comes to those stories.
So what am I ultimately saying? 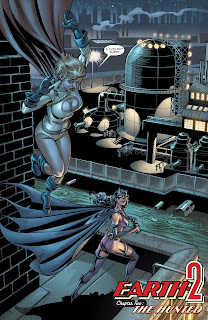 While I'm personally not a fan of Tom King's take on Batman or Catwoman (and I was even LESS impressed with his take on Helena Wayne's origin), he is still doing his Batman/Catwoman story as a love letter to Batman and Catwoman's history, their romance, and ultimately their fans. That should be reason alone to invest in his upcoming maxiseries.
The other reason to invest is that if you are a fan of his take on the characters, and you especially love his style of writing, DC is granting him full creative freedom to tell the story he wants. By not being bound to the main DC canon, King can literally tell a story where Bruce does marry Selina at the altar, and they both actually plan on having baby Helena together, if he so chooses.
If it's Helena Wayne you want to invest in, then I recommend supporting her in the stories she actually appears in, including reprints of her older stories if you don't already own them. I already have a small list on my FAQ page of which stories to start with if you are entirely new to Helena Wayne. I even have a button on the side of my website for you to click on to purchase a copy of The Huntress: Origins.
The point I'm making is support what you like. Invest in the stories that matter to you. Don't let a story's place in the larger DC canon ruin your ability to enjoy those stories.
[UPDATE 27/06/2020]: Batman editor Ben Abernathy officially confirmed Batman/Catwoman is its own project that won't affect the main Batman canon:

Abernathy said, "The Joker War is a specific mainline Batman event. What Jason and Geoff are doing in Three Jokers is its own thing, what Tom and Clay are doing in Batman/Catwoman, their own thing, what Scott and Greg with Death Metal... I mean, it's amazing for readers to have such amazing content, but none of them connect to the Joker War puzzle at all, this is our story, this is the main Batman story, and as a fan, I'm looking forward to reading all the other titles for sure, and be sure to check out Death Metal, because that first issue was bonkers fun."