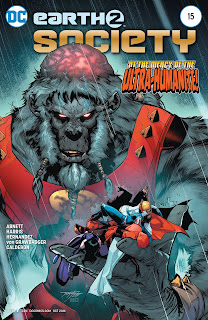 Summary: "Dick Grayson" has reunited with his son, John, but John is under the control of the Ultra-Humanite. John recognises his father's face and wants to be back at his side, but the Ultra-Humanite will not accept betrayal and seeks to destroy John. "Grayson" is powerless to run after his son and capture his abductor and pleads with Helena Wayne to recover his son.

At the Justice Society Tower (yeah, I'm calling it that) in Neotropolis, Captain Steel is undergoing surgery after being disembowelled by Scalpel in an earlier fight with the Ultra-Humanite's child army, but is on the brink of death. Power Girl is slowly regaining her powers after being depleted of them in that same earlier fight. Sonia Sato and Wesley Dodds have noted that the child army has already left, which for them means they were either scared off or they got what they came for. Val-Zod thinks the kids were after Fury's Pandora vessel and Sonia questions who the kids were working for. Alan Scott comes out and confirms to the group that it was the Ultra-Humanite who attacked them and classifies him as an Alpha-level threat. The group then wonders if the Ultra-Humanite has been among them this whole time and if he came with them on one of the generation ships. Scott thinks he may have used his mind altering abilities to escape unnoticed. 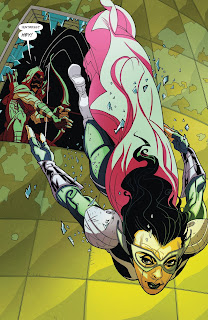 Review: I have to be honest, I almost didn't review this comic this month, and that was mainly due to the artwork in this issue than anything that happened narrative-wise, but I'll get to that part later. First, let's talk about what I did enjoy from this month's issue.

One of the persistent problems I've had with the New 52 Earth-2 has been the outright usurpation of Helena Wayne's story in favour of any new white guy in a bat suit by DC Comics. Though Helena Wayne did front her own comic for three years, she was not actually having her story told within the context of Earth-2 and she has been called anything but her own father's successor, with DC handing over that title to male characters who have not actually earned it. It was both wholly offensive and sexist in every way possible. One thing I've been loving about Dan Abnett is that despite inheriting such a problematic premise from DC editorial, he has been gradually course-correcting on this issue. Though it hasn't been perfect, I do like the fact that Abnett has been attempting to give Helena more visibility and has even been slowly returning her narrative to her, which brings us to this month's issue.

The first eight pages of this month's issue focuses on "Dick Grayson" rediscovering his son after being missing for a whole year, and his son actually recognises his father's face, which causes the Ultra-Humanite to lose his power over him. "Grayson" is rendered powerless when the electrodes in his exoskeleton are blown out, which leaves Helena with the task of doing the hunting herself, and this part of the narrative even ends with the acknowledgement that it will be the Huntress who will be doing the hunting in the Annual story due later this month.

I know I gave a lot flak to DC for marketing Helena Wayne's own family legacy as "Dick Grayson's" in the solicitation for the Earth-2: Society Annual (and to be honest, that solicitation still pisses me off), but I will forgive a lot if Dan Abnett actually centres that Annual story on Helena, and we get Helena's much overdue perspective on allowing a complete stranger to take over her own father's identity. There definitely has to be a better explanation than "Grayson" simply knowing her grandfather that she barely knew herself for a few hours, and somehow, that was okay with her. There definitely needs to be a more important relationship established between the two for Helena to even consider allowing a strange man to be a part of her family legacy. At best, there is hint of a romantic relationship between them from the way Helena looks at "Grayson" in this issue and even strokes his face with her hand, but that's about it. Beyond that, we don't know anything else until the end of the month.

My only complaint about this part of the story is that Tony Harris brought back that stupid facial scar that other artists post Jorge Jimenez abandoned. I really hope that facial scar is one of the things that permanently goes away with Rebirth since it added nothing of value to Helena's character beyond Daniel H. Wilson thinking it looked cool (apparently the man has never met women who are victims of domestic violence), and it just doesn't fit a character who is the daughter of Batman and Catwoman who also used to be a lawyer. It also doesn't make sense for her to have a large and prominent facial scar since it'll be an easy identifier for enemies, especially when it is equally visible with her Huntress mask on. It's pretty stupid, period. If Dan Abnett is still writing the character with the Justice Society post-Rebirth, and if he actually has the creative freedom to write that scar out of existence, please do so! I will, forever, be grateful!

The other thing I loved about this issue is that there was more focus on the Justice Society characters this time, which was my major complaint about last month's issue. I really loved Alan Scott's characterisation in this part of the story because he still continued to try to do the right thing, even if he knew that the chances of failure were high. My favourite moment came when he tried to appeal to the Ultra-Humanite's refugee status and proposing that they all work together to build a better world. That is definitely something Alan Scott would do since he's often about finding solutions to problems and often vouches for inclusivity instead of creating more division. Ultra-Humanite of course doesn't go for this deal given his more villainous intentions, but it still reflected well on Scott's character. The fact that the Ultra-Humanite then amped up his mind-control abilities to force Scott to repossess his power ring (effectively resuming his Green Lantern identity) and force him to work as his new agent, it made the loss of Scott feel more consequential because it did two things: first, it undid the sacrifice he made to prevent war, and it caused the Justice Society to lose their most important ally.

Normally, I would get upset at a writer who goes the easy route of turning an established hero evil as a shortcut for 'thickening the plot,' but Abnett actually makes that stupid trope work well here because Scott actually had agency prior to the Ultra-Humanite taking control of him. This wasn't a case of cheaply robbing a character of their agency to have them do horrible things to their friends from start to finish, but very much a case of the hero losing control of the situation when he attempted to do the right thing. The only thing I didn't like about this part of the narrative was the casual killing of Sonia Sato and Wesley Dodds (in addition to Henry Heywood Jr. being critically injured last month), even with Scott not actually being in control of himself when he killed them. It bothered me because it removed the last Asian character that we had as a hero in this title (Heywood was the first), effectively reducing the POC cast, and Dodds because I actually like Dodds and he was the only Canadian on the team. The only way I'll feel good about the losses of these three characters is if they resurface on Prime Earth with the classic Justice Society. (Maybe Sonia will reclaim the mantle of the Judomaster?) 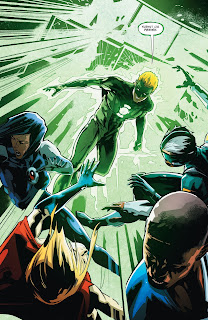 Other characters that get more presence in this issue are Val-Zod and Kara, the latter of whom had her powers weakened last issue but is slowly recuperating them in this month's issue. Val actually had something important to say this time--namely just inform Sonia and Wesley about the Ultra-Humanite's plan to confiscate the Pandora casket from Fury's possession before a possessed Alan Scott actually attempted to get a hold of it. The heroes do try to stop a possessed Alan from actually taking the box, but the issue actually ends in a cliffhanger before we learn the final outcome.

Overall, I felt this was a stronger issue on the front of devoting equal page space to the Justice Society characters and not having "Dick Grayson" occupy anywhere from half to two-thirds of the book's page count to remind us of his trite man pain. I also like that Helena is gradually being reinstated to her rightful place as her father's successor, something that I hope gets openly acknowledged in the Annual later this month. I also loved how Alan Scott and the rest of the heroes were characterised in this issue by Dan Abnett and there also appears to be better unity amongst the heroes than before.

I would say the biggest weakness of this month's issue is the artwork. Not only do Tony Harris and Angel Hernandez have wildly different art styles that don't quite mesh together the way Hernandez and Federico Dallocchio's styles do, but Harris' portion of the comic looks terribly rushed in a way you wouldn't recognise as Tony Harris' art. I was actually quite surprised to see him credited on this issue since nothing about his pages actually resembled his past work. It was everything from the bizarre use of body language to the extreme use of perspective in some panels, and over-the-top facial expressions that don't quite work with Abnett's script. It was also things like illogical use of contours as facial lines to terrible inking by Wade von Grawbadger, and David Calderon's colours didn't complement Harris' art very well.

Compared with Hernandez' more smooth renditions, this radical difference in art style between pages truly does break the visual flow of the comic in a terribly distracting way. I don't know if this was a case of DC phoning in Tony Harris at the last minute to quickly fill in for regular artist Federico Dallocchio (it really does look like that's the case if I'm honest), but this is really not his best work. If the choice here was delaying the comic a few weeks and getting a more consistent look throughout the book, and sacrificing art quality to get the book out on time, I would have much preferred the former to the latter. I completely understand from a business perspective the importance of getting the book out on time, but part of what I love about comics is artwork. Nothing will suck me out of a story faster than artwork that's rushed or poorly done. I'd rather an artist be given more time (as it should anyway) to do their best work, than to wing it (especially at the last minute) and have it show in the final product.